Are there any graphical diagrams like the Freytag's Pyramid that help you keep track of different timelines, universe and dimensions?

Here's a brief overview of a survey of diagrams I've found, part of an ongoing research project on this topic:

In Die Technik des Dramas (1836), translated into English by Elias MacEwan as Freytag's Technique of the Drama (1895) Freytag specifically analyses theatrical tragedies (he gives classical and Shakespearean examples) as having a 5-act structure rising to a climax and moving towards a resolution of some kind. He maps it as a 'pyramidal structure', helpfully annotated in this copy: 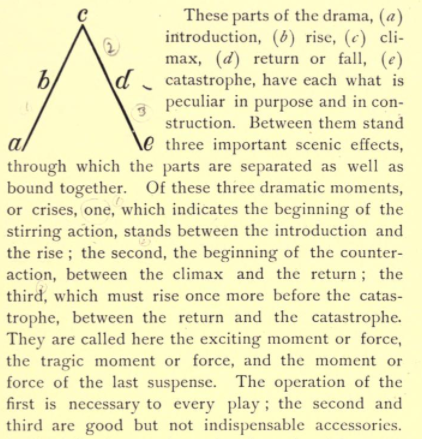 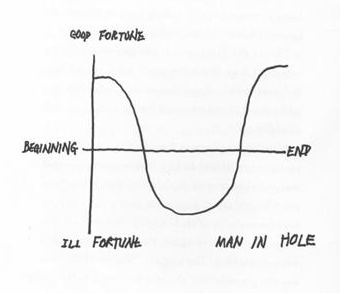 In his book, Story: Substance, Structure, Style, and the Principles of Screenwriting, McKee gives a number of diagrams, some showing relations between characters and situations using concentric circles: 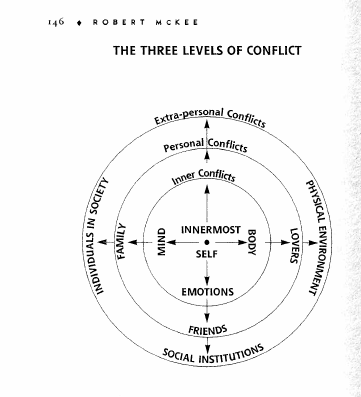 Others are similar to Vonnegut's and map different aspects of a story through a narrative: 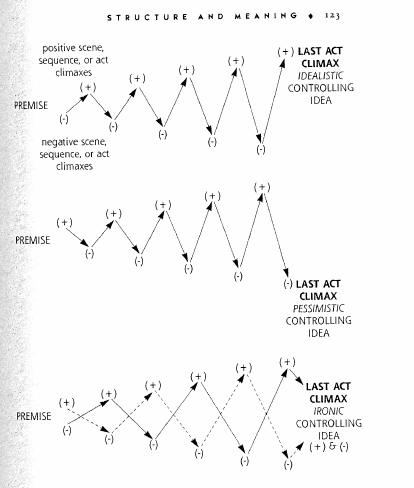 In Writing Fiction: A Guide to Narrative Craft, Burroway presents a mix of both Freytag's 'arc shape' and Vonnegut and McKee's 'wave' approaches to map one version of the tale of Cinderella as a generic structure: 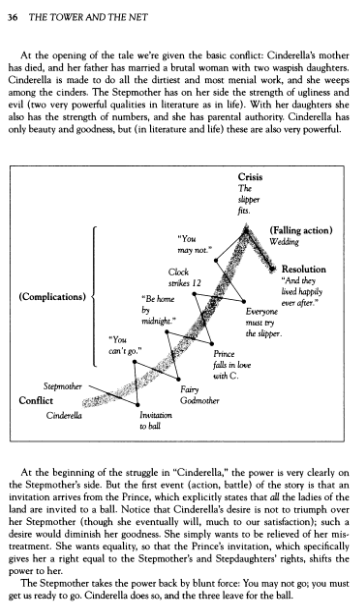 The problem with these approaches, as you may have found when working on a complex story of your own, is that they attempt to plot the narrative arc without differentiating between the level of story (in which the events unfold in chronological order) and the level of plot (which unfolds according to how the events are told, which can be different). Writers need to be able to trace both.

Moreover, different characters' story lines each can follow very different patterns, something that isn't differentiated in the above graphs, which just plot a very, very generalised overview, which is useful, but it isn't enough if you are a writer and want to see both the detail and the overview at a glance.

I have a number of videos up on line and a book in the process of publication which offer a way of plotting a story using 6 very simple symbols that takes into account both the need for seeing what happens on the level of an individual character's story line, and allows these to be aggregated so the arc of the composite story can be viewed.

It would be pretty simple to map the relationships in time and space between different dimensions using this system. What's key here is that the patterns can be compressed and be related to common story structures, each with its own quality - providing an insight which complements and builds on the works of the popular authors quoted and that of more academic writers such as Propp, Levi-Strauss, Greimas and others.

It would be useful to know how well you think this approach could work for you potentially.

Not the answer you're looking for? Browse other questions tagged creative-writing world-building or ask your own question.

2
Aside from mind maps, what other graphical diagrams and graphical elements can you use to document and plan out your novel?

32
Organizing your Universe?
23
Tools for science-based world building?
7
How to attract the average reader to an "intellectual" novel?
10
Writing techniques or exercises to improve ability to show rather than tell?
9
Stop thinking own work is stupid
5
Pitfalls to avoid when using the "GM technique" for fantasy writing
23
How to handle a massive info dump post-ending?
16
Are wands in any sort of book going to be too much like Harry Potter?
2
Aside from mind maps, what other graphical diagrams and graphical elements can you use to document and plan out your novel?