Aside from mind maps, what other graphical diagrams and graphical elements can you use to document and plan out your novel?

Aside from mind maps, what other graphical diagrams and graphical elements can you use to document and plan out your novel? I am specifically referring to anything that has a graphical element, so any plain text or text documents with some images are excluded. I am wondering if there's anything else. I can think of timelines too, but aside from those two, I can't think of any.

Freytag's Pyramid is a famous visual story planning device, and has been used for centuries to describe the most common story structure in writing: 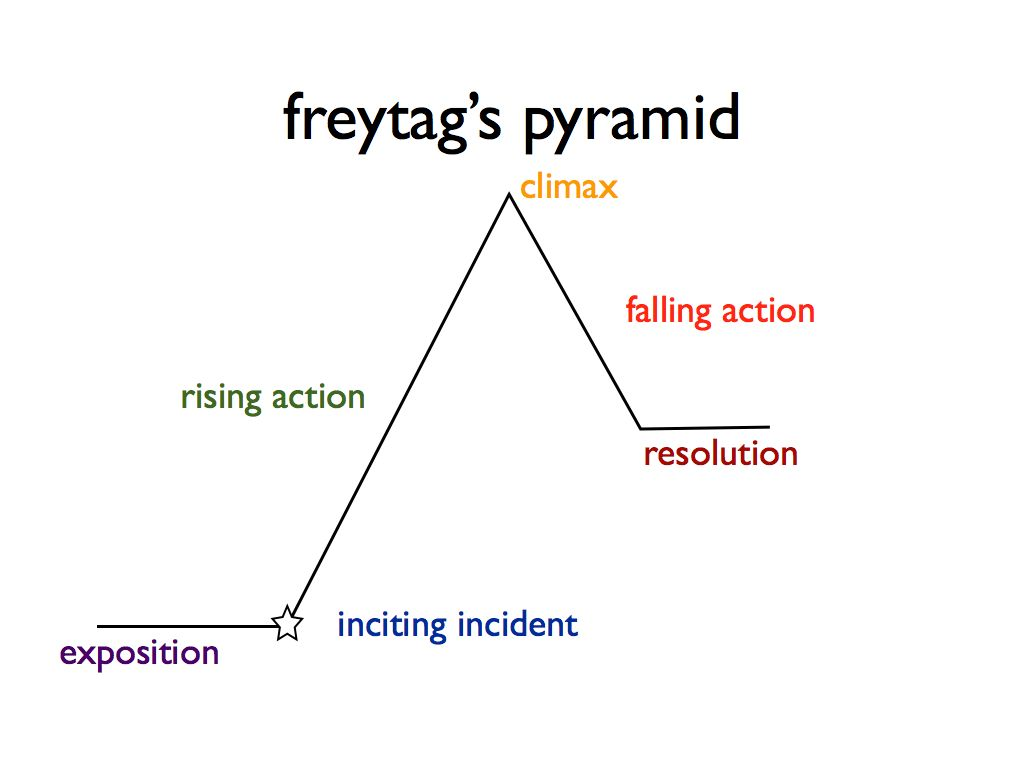 You can also lay out the events of your story in chronological order on a visual timeline, which helps you plan out when things take place. For example, here is a visual timeline of the Hunger Games: 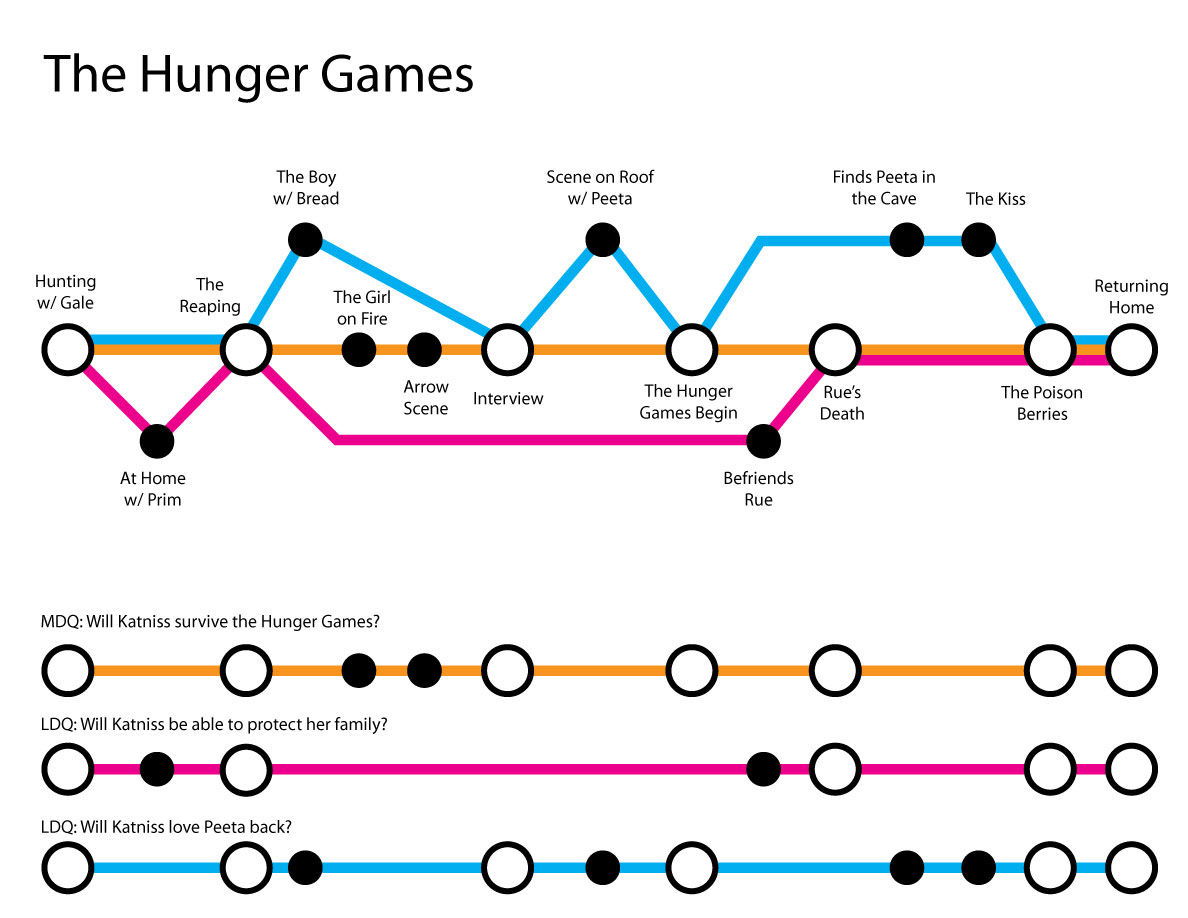 Similar to a timeline, but more detailed, is the Gantt chart. It is essentially a timeline with multiple lines, converging and diverging, displaying the interaction of various interconnected pieces of a larger project. As used in project management, it allows identification of the "critical path" of events that must happen in sequence and how long each one will take, so that enough time can be budgeted for the project as a whole. Events not forming part of the critical path can happen concurrently, but these events must still be scheduled to start and end on time so their intersections with the critical path occur on time.

For a novelist, Gantt charts allow the writer to plan out the complex interconnected timelines of character backstories and actions, avoiding anachronisms when explaining the overall sequence of events. More than just a timeline, Gantt charts allow not just chronological but spatial organization of events based on the spheres of influence of each character, allowing the omniscient writer to keep their characters (and the reader) non-omniscient.

Other graphical tools beyond general mind maps include "entity-relational diagrams". The original coined use of that term is in data modelling, but I'm using it more generally. Think of a family tree, but more general, modelling not just marriage and parentage, but all kinds of interpersonal relationships, like boss-employee, teacher-student, dating/affairs, as well as relationships between people and nonhuman things that are important to the story, like tying people to places. Similar to a mind map, you draw circles/bubbles for each "entity" you're tracking in the model. Smaller bubbles linked to the large one can be used for useful pieces of information, or you can write those inside bigger bubbles of each entity. Then, you draw lines between entities and write concise terms of the relationship, with an arrow pointing in the way the relationship line should be traversed for the stated relationship to be valid (if the descriptor is hierarchical).

I use activity diagrams with swimlanes. I create one node per scene and use one swimlane per POV. I use red lines (pun intended) to connect the scenes in story order.

Many software engineering drawing apps have support for this. My favorite, yEd has functions to automatically structure the elements hierarchically.

Family trees might come in handy if you're creating an epic saga about a family or two. Otherwise, likely not. (yEd has layout functions for family trees as well, but you could also use genealogy programs like Gramps to get the whole family data in... if your family's history is really important.)

I also use conflict diagrams, invented by M Harold Page in his "Storyteller Tools." These are great to get to a higher level of your novel's conflicts and alliances. (I create them with yEd, I think he uses Scapple.)

Using yEd and putting in characters and connecting them with lines of different colors or patterns and then running the organic layout function usually produces a nice diagram over connections between people and sometimes organizations.

I've used it to visualize a resistance group organization both mentioning people and structuring the general organization of a cell in that group. (Check the above-referenced yEd manual page. You'll get an idea of how to do this with groups.)

Of course, no novel could ever be written without the timeline diagram. This is akin to a Gantt chart, and I use Aeon Timeline to create them.

Many authors use index cards on a corkboard or wall. It could definitely be called a "diagram" and the cards themselves graphical elements. Especially if you purchase different colored cards.

Many writing programs also have index card handling (e.g. Scrivener, Final Draft, and Storyist). Some even have swimlane handling in the index card view.

Not the answer you're looking for? Browse other questions tagged creative-writing or ask your own question.

1
Are there any graphical diagrams like the Freytag's Pyramid that help you keep track of different timelines, universe and dimensions?

9
Stop thinking own work is stupid
15
What techniques do you use to maintain your writing focus and maximise your productivity?
5
Proven psychological or scientific means of scaring people?
1
What do you do when you think of two different scenarios that can happen in a certain scene in your story and you don't know which one to choose?
0
I have a habit of subverting certain tropes out of hatred. How can I overcome its negatives without losing the benefits?
0
Possible metaphors for the sky
0
What other documents can you write in order to plan out your scripts?