Seeking information regarding the use of a period between the day, month, and year formatting

So years ago, I worked with a man who used to format the logbook date with a "day.month.year" style e.g. 1.9.14. I've grown fond of this since it eases the eye in deciphering the date by seeing the numbers as a set yet not being distracted by the period being used as a delimiter.

Tried searching google and on here for more information, maybe even the source of where this is used since it's quite clever. All I have as a clue is he was born in Germany then immigrated to the states as a child (no accent whatsoever), and perhaps learned it in the schooling system in Europe.

Can anyone shed some light on the use/origin of this method of date formatting?

There is of course a space between all "words". The dot behind the number for the day is a writing convention for ordinal numbers. E.g. 10 is "ten" and 10. is "tenth" in German orthography. So the above example reads "tenth january two thousand fourteen", if you translate it.

Of course the month can be abbreviated as a number, too. Using the same example from above, we would get:

Note the spaces behind the dots, as what you write is considered a word, which is only represented as a number. This, with spaces, is how most people write a date. (Typographers recommend an eighth of a quad instead of a full space.)

But there is in fact an industrial norm (DIN 5008), which defines design rules for text (such as business letters), and this norm requires that you writes dates without a space:

Looking through some of my recent letters I can confirm that government institutions and my university use the format without spaces. (The expanded version, with the month spelled out, always must have spaces.)

In handwriting or informal letters (written by non-secretaries), the space behind the dot is the norm.

Basically the German convention to write dates rises naturally from how dates are spoken.

The dot is a common convention for ordinal numbers, and in German the day is said before the month, so, if you think about it, it is not actually a convention for writing dates at all, but how a German would naturally write a date if there was no convention.

This natural way to write dates as it was habitually found in letters at the time was defined as an orthographic convention in 1928 through the "Guidelines for the Treatment of Business Mail" by the German government.

I don't know where the dot to mark an ordinal number in numeral form came from.

Not an answer, strictly speaking, but perhaps pertinent info: U.S. DoD writes dates like 02Jan2014 or 02 Jan 2014. Probably they got that from NATO. On forms it's not unusual to see that as 02/01/2014. Until the Y2K "crisis," they would leave out the 19 in the year, which made for a nice symmetry: dd/mm/yy. Are you sure your friend left out the leading zeros?

When choosing a format for a date, there are several factors involved, such as:

I've noticed several movie posters using the "dot" format, with some variations, including using dots even when the month is spelled out (see samples below).

I don't think you'll find a consensus answer about the best way to always format a date, although I'm sure you can find quite a bit of emotional and contentious debate on the subject. Some fellow named Ray wrote: "Whoever started putting dots in dates and phone numbers should be eliminated!" That seems a little harsh to me. Another discussion board post reads:

The date format is kinda "fadish", meaning that it's "cool" right now to use dots in dates and phone numbers, but that'll wear off eventually. Also, since Y2K, I'm not used to seeing 2012 expressed as just 12. Hope that doesn't become common again.

We'll see if it'll "wear off eventually." As for using just a "12" for "2012", I say that's context-dependent (I wouldn't do that in my software, but I don't have a problem with someone writing it that way on a postcard).

At least ranter opined that the dot format increased when internet addresses became popular. I wonder, though: How many sci-fi fans might scoff at that assertion, having used dots for decades, reminiscent of Star Trek's stardates? 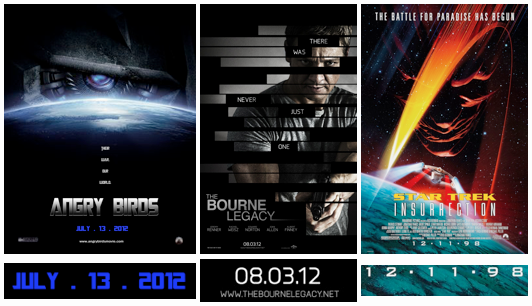 Not the answer you're looking for? Browse other questions tagged formatting or ask your own question.

7
Formatting for stage, television, and the silver screen
3
What is the difference between an ending scene and the end of a chapter?
4
What format should I use when beginning a chapter with the time and location of the events?