How to minimize language mistakes while writing

While it's true that:

you do not always have an editor available, and software tools aren't perfect ("move" instead of "movie" is not a spelling mistake). Some burden falls upon you to proofread your writing, which brings me to my question:

It's been known to me for a while that simply "trying really hard" to detect problems doesn't work. I did hour long sessions of editing and proofreading my work, only to return to it the next day and still find small issues with it. Of course, errors happen and it's not unexpected that small mistakes will slip by in a large piece of work, but still, striving for perfection is not a bad thing. So my question is, what do you do about it? How do you bring you error count to the minimum?

Proof-reading and editing (or copy editing) are actually different though overlapping activities, arguably requiring opposed skills. A good editor is creative and imaginative; a good proof-reader adheres consistently and strictly to style guidelines.

Assuming you have neither person at hand, here are four tips that might be of use:

On that final note, this quotation from the poet Paul Valéry might be worth putting up somewhere you can see it:

How can he recognise that his work is finished?

That's a decision he has to take…In fact, the completion of a work is only ever an abandonment, a halt that can always be regarded as fortuitous in an evolution that might have been continued.

It seems like a colossal waste of paper, but good self-proofreading really requires a hard copy. I'm one of those people who doesn't have much of a problem with this, but I end up catching the strangest stuff when it's all printed out. Most writers agree on this.

Writing time is not the good time to concentrate on writing "correctly". You should concentrate on the subject, on getting the point across. If you worry too much about commas and spelling, you lose the bigger image.

Proofreading later is the answer, and finding good proofreaders is THE answer - some people are just naturally inclined towards it, they admit themselves they have not enough creativity to write but can spot minute grammar errors you'd never notice. If you find one of these people, make friends and hold to them like they were a treasure.

As part of a test in to force a WP-post to strip itself all built-in style & theme codez ... it's not perfect but it worked plus the content is a decent answer...an outline of one of my Copy Editing 101 lectures. Without further adieu...

*Credit due to my editing teacher, Dr Teresa Allen.*

I made a proofreading app and I feel your pain. If you are the author, you can't proofread it right because your mind tends to skip things it already knows.

The next step is to read it loud but that is not the best approach because you're still subjective and tend to race it down.

What most people seem to suggest is having someone else proofread or read it loud for you. 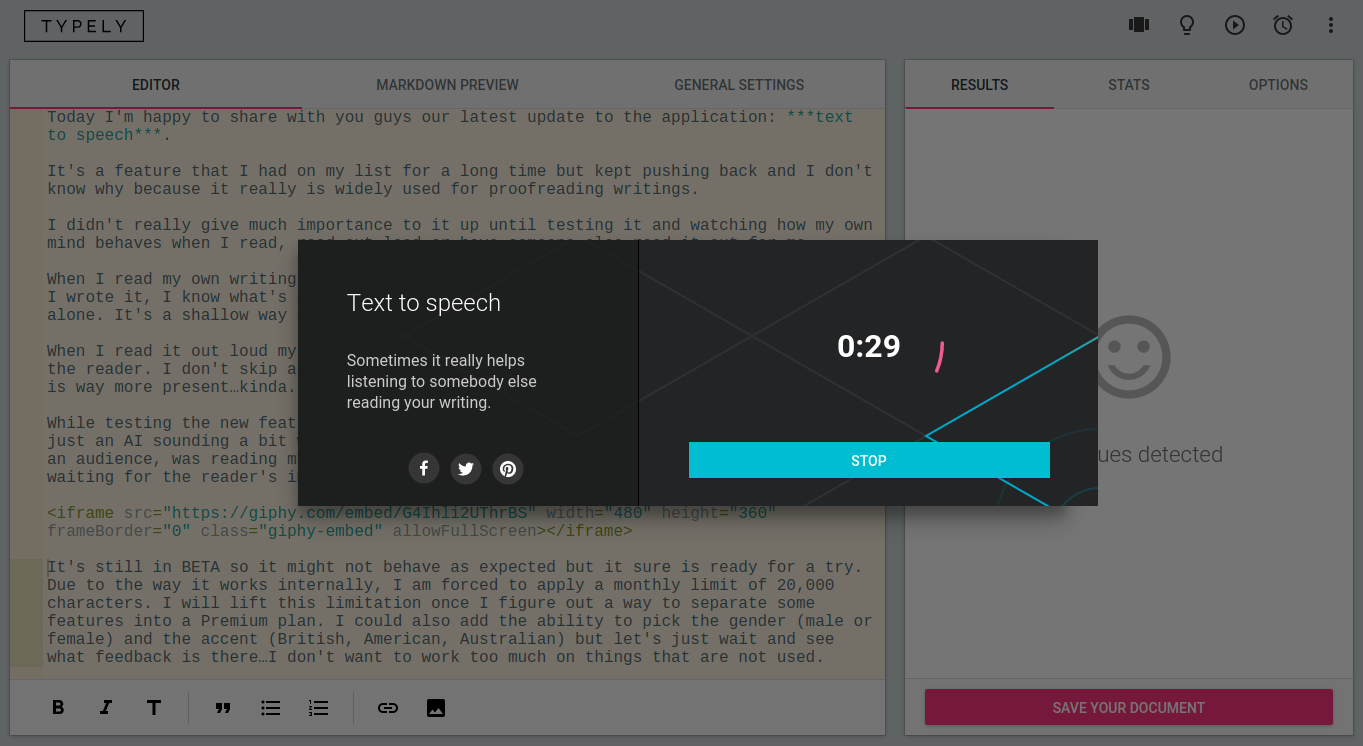 Since our last update, Typely is able to read text for you and the feedback we received is awesome.

Not the answer you're looking for? Browse other questions tagged editing proofreading or ask your own question.

1
Book recommendations for proofreaders
39
How can I catch more errors when I proofread?

10
Correct spelling errors while writing or after you've finished?
8
How do I escape my own experience?
6
How much $ to calculate for an Editor
5
How many errors should I expect from a proofreader?
4
How do I find mistakes in grammar and style in my own writings?
13
How to stay motivated while rewriting?
9
Can Extensive Outlining Take the Place of the First Draft?
1
What is Writing/Editing Backwards Really?
3
Sentence rhythm
19
Why do professional authors make “consistency” mistakes? And how to avoid them?