figures and tables always on top of the page?

I have to write a scientific paper for a university course. As far as I know, and as far as I have ever seen, tables and figures are always inserted at the top of a page, instead of at the exact position in the middle of the text, allowing for a few lines above, below or between the tables. As far as I have heard, that is the scientific standard; it keeps the text together and more readable; the problem that figures are not at the exact same location as before, but maybe on a different page, is made up by the fact that every figure/table has a number, and therefore finding the figure described in the text should not be too hard.

Now I'm in a group with a few other students (I'm responsible for typesetting and compiling our report), who insist they've never heard that, and want me to insert their tables and figures in the middle of the text.

Am I wrong and overreacting, or is there any regulation or standard that wants figures to be at the top of the page (I really have never seen a scientific paper with a text above a figure)? How is that called, such that I can justify and back up my opinion?

I doubt that there is an actual rule as you describe. In scientific circles, many people typeset their work using the LaTeX typesetting engine because of its good support for mathematical equations and so on, and because it sort of adheres to a principle of separating design from content.

The LaTeX typesetting engine uses the concept of image and table floats which automatically try to determine the best position for your figures and tables and "floats" them to that position. The default (which some publishers insist on) is to have the float setting be tbp which basically specifies the order preference for placement of floats as being either: t = at the top of page, b = at the bottom of page, and p = on a special page just for floated elements.

The downside to this default is that sometimes figures and tables appear before they are mentioned in the text on a page (if LaTeX decides the best position to place the float is at the top of the page). My personal preference is to avoid this behavior. Of course, these settings can be overridden (for example, adding an h, making the float statement being htbp, changes the default placement to first try placing the float "here", before trying the other three options to determine what is best) but since part of the idea behind LaTeX in the first place is "you work on the content, the program will figure out how to make it look good", I suspect that there are a good number of people who just leave the default settings as they are.

Given your preamble that "I have to write a scientific paper for a university course. As far as I know, and as far as I have ever seen, tables and figures are always inserted at the top of a page", the widespread use of LaTeX to typeset journals, books, and working papers might be an explanation for your belief.

However, if you spend some time looking into this question further, I am fairly convinced that you will find more people recommending closer integration of text and figures or tables. You argued that placing figures and tables at the top of pages "keeps the text together and more readable". However, most argue the exact opposite, saying that if the reader has to turn the page to look at a table or figure (or even look down to the bottom of the page to read a footnote!), their concentration is broken and increases the reader's load.

Perhaps one of the most prominent advocates of that alternate style (placing figures and tables as close as possible to where they are mentioned) is Edward Tufte. Below is an example of a page where he describes this feature, using Galileo's work as an example. (Note also how his "footnotes" appear directly in the page's margin.) 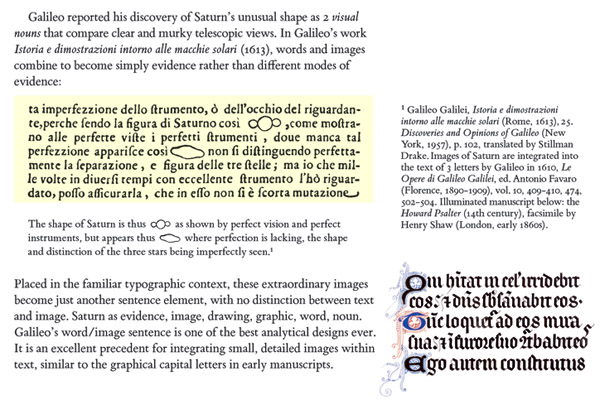 Anyway, to wrap this up, I would say you might want to do some more investigation before you decide on your own standard; or, if you have to submit to a particular journal or publisher, contact them and ask what their standards are (most will be able to provide you with author guidelines for manuscript preparation of some sort, perhaps even a template). This will save your group time arguing over matter of style (things for which there really aren't rules) and let you focus on your content.

I believe that you are over-generalising. Figures and tables OFTEN appear at the top of a new page because of the requirement not to split them over page breaks.

That does NOT mean that they must be placed there if there is enough space on the previous page to enable them to be placed where they fall naturally in the text.

In a paper with many small figures, it would be very off-putting for the reader if every reference to a figure on the recto (odd-numbered page) after the first line required you to turn over because of an entirely arbitrary decision on placement at the top.

In ages past when journal editors decided layout, figures were placed by authors at the end of the manuscript on separate pages. As powerful page layout software becomes generally available, many journals have removed that restriction.

You'd make life so much easier for yourself if you simply put all your tables and figures in an annex at the back of the paper. Then simply reference the table or figure within the text with - see figure 1, Annex 1 see table 3, Annex 5 etc.

This was the standard way of preparing these kinds of documents before modern computer page layout technology suddenly made everyone a graphic designer, copy writer, editor, proofreader typesetter and illustrator all in one.

Forget trying to be a fancy dancy graphic designer and concentrate on the content of your paper.

Not the answer you're looking for? Browse other questions tagged scientific-publishing or ask your own question.

10
What is the key reference documentation and how should I cite BASH?
5
How can I consistently distinguish among tables, fields, and records in a database?
0
Which citation format do I use when multiple style options apply to the same source?
4
Scientific Reports - Significant Figures
3
Computer science academic conference paper using “randvar” instead of “random variable”
1
Explicit scientific syntax for academic writing (like a programming language but for scientific reports and publishing)?
1
In an academic Paper, should you mention/reference stuff like Definitions or Theorems? Or are they part of the “text flow”?
4
Should I re-introduce acronyms in important section and write them out in the section's title?
2
How to include figures and images in body text