Is this telling and not showing, and why is it ok in here?

In Stone Ocean, the antagonist explains his power at the end of the series. I am wondering if this is telling and not showing and if there are situation where telling and showing is completely ok and what are those situations. Because I feel like there might be a good use case for doing this, but I don't know when it's appropriate or not. 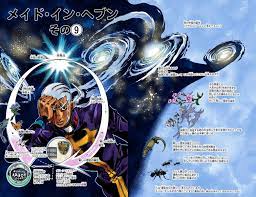 On the one hand, because manga and comics are visual media, almost everything in them is inherently shown, even sound effects and dialogue. The only way for a mangaka or comic writer to "tell" the audience something is through narration boxes, which have the additional drawback of taking up valuable space on the page.

On the other hand, there are a lot of things that are hard to show through static images alone, without the benefit of motion or sound. As a result, both manga and comics have a long-standing tradition of having their characters narrate, either out loud or in thought bubbles, what they are doing, what someone else is doing, what's going on around them, and so on. All of this helps the reader understand what's going on.

In the case of your specific example - Enrico Pucci explaining his Stand's powers - this is justified because, from what I know of said powers, they fall under the category of being hard to convey through static images alone, so someone has to explain to the audience what he's actually doing. It's also common enough that TV Tropes (obligatory warning: massive time-sink!) lists it as a trope in its own right: Explaining Your Power to the Enemy.

"Show don't tell" is not an absolute, inviolable law that will get you cast into writer's purgatory if you break it. It's a guide for writing a better story, by being mindful of what will appeal more to your audience. "Showing" is not the goal, keeping your audience captivated is.

If you're not sure whether to show or tell in a scene: try both. Then pick what works best.

I don't know the story in question. There might be a better alternative. And as writer you should think about it. But having the character just tell things from his perspective might be the best solution. Since he's already talking to the protagonist (presumably), it fits in the narrative.

Also note that "show don't tell" primarily applies on the author's level, not on the character's level. Here the author is showing the character explaining his powers.

9
Is Jaime Lannister a "telling not showing" example?
12
Should you "Show, Don't Tell" when your character is recounting events?
5
Skipping telling to get to the showing - pros and cons
2
When Showing Over Telling Becomes Too Extravagant
18
At what point does a POV character noting their surroundings go from showing/telling to an infodump?
1
Am I telling or showing?
5
Do you need to explain why your character acted out of character?
1
Expressing the intensity of an emotion by showing and not telling