When do you have to kill a character?

Of course, everyone have their own different thoughts in this topic, but I would be happy if my answer gives you some idea.

When the character you write is in middle of a character development:

There are some writers who develop a character only to kill them later for the plot development. Don't be them (at least in my opinion). But remember there is a difference between when a developed or developing character is killed and when a character is developed only to be killed later.

When you kill a character to heat up the plot:

Again, writing stories or novels or any piece of writing is tough and I envy many of the writers who do that in an extraordinary way. There may be sometimes when the plot will be going off the tracks or slow, but it is okay. Take your time and get on with the flow. Don't kill them to heat the plot temporarily. It is a bad habit. Some characters you killed could have made some crucial plot change later but they can't because they would have been dead at that point to do that.

Killing too many characters at the same point:

Other than that the image sent by @towr pretty much wraps up other things.

There can be many reasons to kill a character. And there are also reasons not to. It depends on the kind of story you're writing as well as the audience you write it for.

Here's 7 reasons to kill, and 3 not to, from www.helpingwritersbecomeauthors.com
But don't imagine that's a complete list.
[edit]Spoiler tag added because the list contains some examples of deaths in books and movies.[/edit] 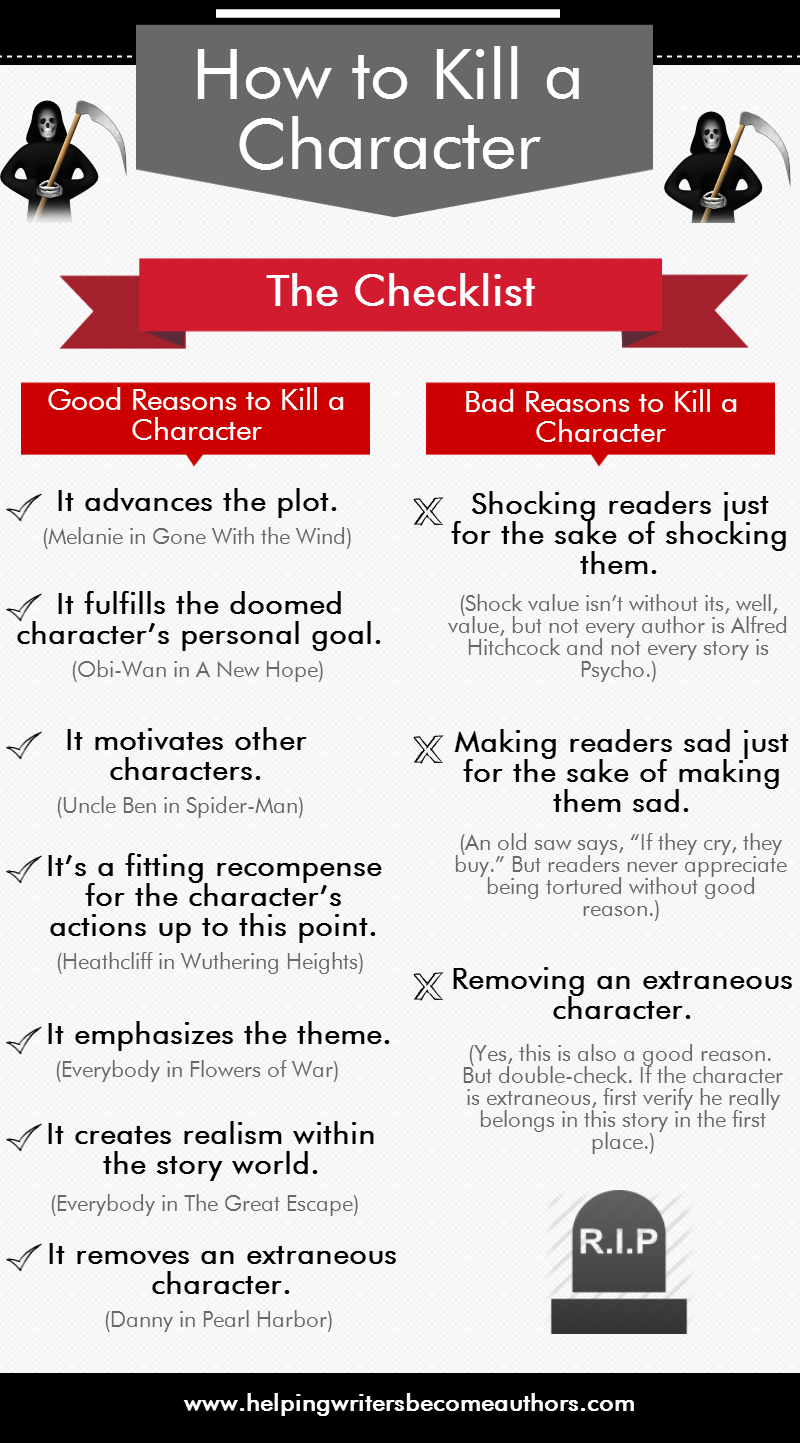 You don't have to kill characters in stories. Heck, most children's stories do not involve any deaths.

But death is part of the typical adult human experience. The death of a loved one can be the most plausible motivation for change in a hero. Or the death of many, like a terrorist. It may be hard to write a believable terrorist story in which nobody dies. Death can be a great motivator, like in a detective story.

The death of a villain can be the emotionally logical payoff for a character that has been killing people for selfish reasons, to get rich, to gain power, to gain fame (like serial killers).

Death is about the biggest game-changer in fiction, if you are telling a story in which a character has a life transforming experience or makes a life-transforming decision about how to live their life, or what they will do with their life, then the death of somebody they love, or care about, is a plausible reason to justify that.

Would Batman have ever come to be if Bruce Wayne did not see his parents killed in front of him? If his father just got punched in the nose whilst being robbed? The death of his parents in front of him, and being left to deal with the grief of that trauma on his own, is a plausible motivator for devoting his life to fighting crime. I find it hard to imagine a motivator for that drastic a life change that doesn't involve death.

In Die Hard, Bruce Willis's character needs to see (in a fictional sense) the terrorists brutally, intentionally and calmly killing people without any qualms, those deaths are his motivation to risk his life and go solo vigilante to save his captured family from those sociopathic criminals.

Stories don't have to kill characters. You have to kill a character when the irreversible finality of death, and the emotional trauma of dealing with one or more deaths, is the only plausible motivator for either the hero or the villain to then do what they do. Completely changing their life in some way. Risking their own death, becoming a soldier, or vigilante. Or a hardened criminal.

This is part of the human story, human society has struggled forever against the sociopaths and lethal dangers of the world. But that struggle is also a motivator. To defeat danger, to defeat disease, to defeat slavery and injustice, to defeat violence. To defeat death! Of course none of us will ever succeed at that entirely, but we can win our battles against death, and that is the point of many stories.

But you can write stories without killing any characters, about other parts of the human experience. Finding love, struggles for acceptance, solving non-murder mysteries, defeat injustice on a smaller scale than murder. Finding a fantasy world. Putting a bully in their place. Succeeding in a struggle to be recognized as valuable. Fighting and overcoming an addiction. Fighting and overcoming a hardship, like trying to adopt, or get pregnant. Dealing with divorce, or cheating by a spouse.

There are many story topics in which nobody has to die. You really only have to kill character(s) when you need the strongest possible motivator for somebody to seriously risk their life to prevent further death, or drastically change their life in response to death, or sometimes reveal their true selves and feelings under the stress of fearing death.

Edit in response to comment: It doesn't matter what the victim's point in development is. They can be an infant, a child, a teen, an adult, retired and ending a long life, whatever.

The schedule for killing them is a turning point in somebody else's life, your hero or villain. It is perhaps an inciting incident, halfway through Act I. Or the motivation for a protagonist to leave their normal world, at the end of Act I.

You will know when it's time to do it. If you can't think of a reason to kill a character, you shouldn't be thinking about killing them, and it's OK if the thought of killing them never even crosses your mind.

I have a story where the presumed protagonist dies partway through. This is for a few different reasons:

But why did I decide to kill off the character? What made me decide that's what needs to happen? I decided early on that this character's death was what my story, or at least a significant part of it, was about. At the time I thought I had to fill my writing with shocking twists (wrong), and I thought killing my protagonist would be a shocking twist (probably right). As I matured and learned more about storytelling, I cut out many of my twists because I realized how silly and nonsensical they were, but this one stuck because it became so central to the story and it still seems to work well.

Not the answer you're looking for? Browse other questions tagged characters plot character-development planning ideas or ask your own question.

10
Can a character death sometimes be unnecessary?

8
Killing off a character: deciding if, when and how
51
Killing the protagonist - should it be done?
7
When do I successfully kill off an important secondary main character... in a series of five books?
19
Effective hero journeys that don't kill the villain?
11
How do you prevent a character from being a creator's pet?
28
How can I handle a powerful mentor character without killing them off?
2
Is it okay to kill a main character?
0
Starting character alive or dead?
2
How can I have readers empathize with two protagonists, when one of them is quick to kill?