How do you write a script for a comic?

I read some movie scripts and I know how to write one, but I haven't seen one for comics books. I heard some people use movie scripts to write comics, but I need a template that associates each dialogue and description to a single panel. (A panel consists of a single drawing depicting a frozen moment, and one page contains several panels.)

However, I couldn't find one and there doesn't seem to be a standard way of doing this. Is there any good example? I don't want to draw a storyboard, because I can't draw, but maybe there's some way to circumvent this. I want to make it easier for someone to draw a full page from a written script I wrote.

As far as I am aware of, there is no standardized format for comics. Furthermore, it strongly depends on the artists you collaborate with and their level of engagement in the process of creating the story (rather than just being the drawing hand).

In principle you could set it up to mimic a movie screenplay with camera directions as you move from panel to panel. Compared to a movie there are a number of additional details to be taken into account. A typical example is that you wish to consider the general layout of the page to account for larger panels, or plot reveals occurring right after the turning of the page rather than in the middle of it. Another example is to take into account the size of fonts in speech bubbles, and calibrate the amount of dialogue together with the amount of visual cues that need to be delivered in the same panel.

These are some examples of comic scripts that I could find.

There is some variation in comic scripts, especially as web publishing allows more and more people to publish for a wide audience.

For a solo operation, there might not even be a script. With a duo (writer plus artist), it's still possibly something far from standard. Even when it's a comic company behind the development, there is a little variation, especially between companies. Some artists are given more free reign over the product (being given general scene descriptions and dialogue), other times there are very exact instructions. Scripts also vary a little by comic medium, as webcomics tend to use an infinite vertical scroll format, so there are no pages to mark.

Still, as you say, the industry tends to use something similar to a movie script, but tweaked it its needs.

I found the article Comic Script Basics where Fred Van Lente, a writer for Dark Horse comics, explained his scripts in detail, according to the following image: 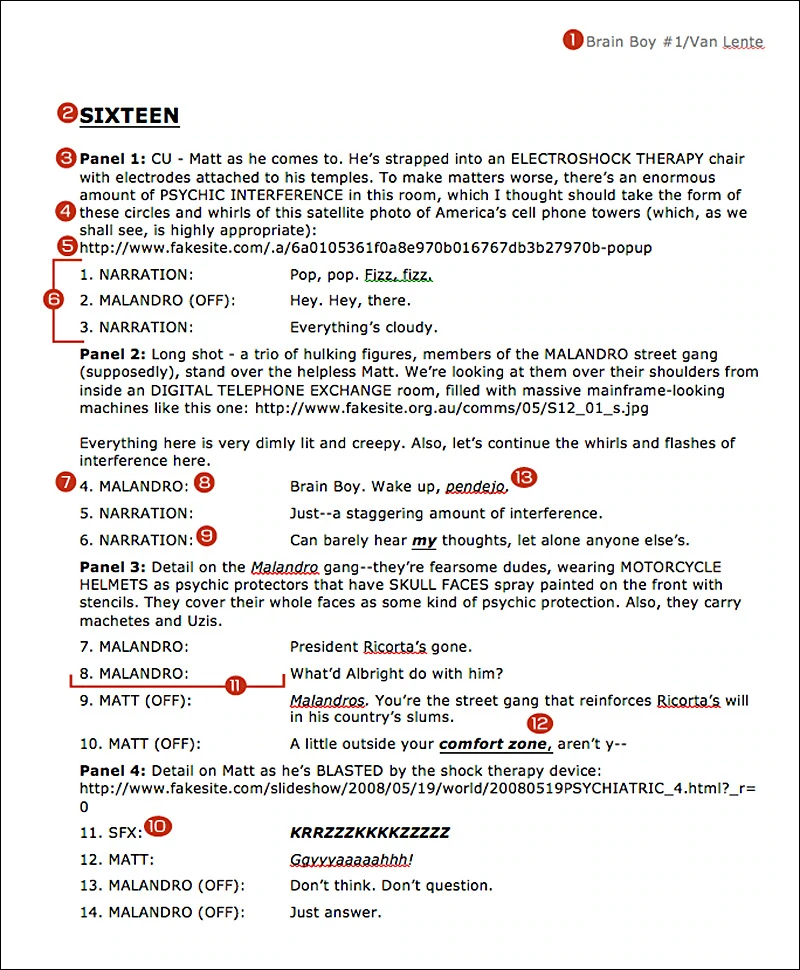 (Read the full article for specific details on each section of the page.)

Briefly summarized, each page has a header for what page it is, which is further broken down into panels. Each panel has a description, followed by the dialogue and SFX (if there's any). The panel description may contain links to reference material so the artist(s) can get a better idea of what's being asked of them. The dialogue itself is formatted including any underlines or italics you may want in it. This particular script has the speaker name, an indent, and then the dialogue for that character starting on the same line, though I have seen other scripts that format it like a screenplay, where the speaker is centered and the text starts on the next line with a left margin (or justified).

He creates his scripts in MS Word, but any similar software would be able to do the same thing.

I found a few more examples of his scripts in another article, Making Comics: Writing scripts people actually want to read.