A lot of tiny ideas come to my mind but I don't know how to work on them and expand them into "valuable, satisfying, and worth of reading novels", and as a result, I lose motivation and give up rapidly. Would outlining help solving this problem or this is related to how much my writing skills are good?

and some people are naturally better at it than others, but like writing it can learned. Just as we, as writers, learn the craft of writing good narrative sentences, engaging dialog, and making our scenes come alive with a sense of setting and motion, there is a whole lot to learn about telling a story is satisfying and enriching.

Your ideas, if they are anything like mine, get you enough to start a story, (the bottom of the leaf). If you think of the satisfying end of your story as the tip of the leaf, the story (plot, theme, character wants and needs) is what gets you from the start to then end. But, as you tell your story, you are having to make choices about how characters act and react to events and the other characters in the story. Each possible decision you make as an author is like the veins in the leaf.

At the start of the story, it's easy to decide what to have happen, but you only get one decision, and that send you don't one of the potential branches of your story. Every fork on the leaf, is a decision you have to make. But, unlike a leaf, nothing tells you before you make that decision if that will steer your story to its end. 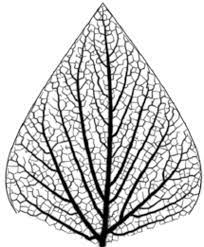 Because all of your decisions need to reflect the emotional and intellectual needs of your characters, and their reactions to other characters and events in your story. If the sum total doesn't hold together through to the end of the story, it's not a satisfying story.

This is why I think story telling is hard, there are such a huge number of decisions that need to be made and they affect the flow of the story.

This is also why I think outlining for any story -- short story or novel or series -- is really important. And, outlining lets you see your entire story before you've put in the effort to write it. If you can't find a way to get from your idea to a story that works and has a satisfying ending, then you might consider not writing it until you can.

I'm in a similar place, but I think outlining is worthwhile.

In the end, I think discovering what sort of writing suits you best and can lead to the easiest flow of output is the best way to move forward.

Are you a discovery writer? Then you might be able to continue expanding on your initial ideas.

Do you thrive with a structure? Then building an outline for narrative arc, character arc, or story elements might be really helpful.

Your question alludes to the desire to make something "valuable and worth reading". I think this method of thinking may trap you. Internal exploration is the only way to find a premise that will compel you to complete a full novel. Explore what ideas give you wind beneath your wings. Whichever method you end up picking, you're likely to need to revise what you put together before final edit in order to make it "satisfying" so don't stress too much about your first draft.

Outlining is something you will have to do before the end, and it'll be part of your notes behind the scenes of whatever you come up with. But don't frontload that if it's getting in the way of your creative process.

Who knows what twists and characters you'll keep in the final draft, right?

Not the answer you're looking for? Browse other questions tagged novel plot outline psychology-of-writing or ask your own question.

2
How can I cut my prep work to get to writing more quickly?
18
How to overcome the fact that I can't write long stories?
9
How to stay motivated while writing a story, after the initial burst of enthusiasm?
3
How Can I Reliably Find Well Written Novels?
3
How do I get rid of my excess ideas?
6
Concentration whilst Writing
7
Avoiding episodic writing
13
Getting an editor after the second draft
3
How to correctly set up plot promises?
8
How do you get feedback when sharing your ideas makes you not want to write?