Mapping relationships between topics in a non-fiction series

I am working on a series of episodes that will be made into individual videos to explain different technologies and how they interrelate at different levels within a specific application domain (the aim being to produce something that is similar to a video-based Wikipedia). To try to keep this engaging and manageable (both to create and consume), I want this to have an underlying structure (kind-of a story). My reasoning being that episodes will frequently cover topics that are in some way a 'gateway' or 'foundation' topic for understanding another episode.

So, I want to be able to say within each episode if there is any prerequisite knowledge for the episode ("Before you watch this episode, you may find it useful to know about..."), and also to be able to give jumping-off points to related topics at the end of each episode ("If you found this episode interesting, you might also want to watch..."). Ideally I want to approach this mapping task graphically. Which is now my problem: How to describe the domain in a way that lets me map, understand and communicate dependencies, and other relationships, between topics and episodes?

A mind map doesn't quite work, as I don't have a single thing with radiating spokes. Also each relationship I need to capture/express might be directed (e.g. a dependency) or undirected (e.g. an alternative technology that could be used in place of the one discussed). There will be a web of episodes where each node (episode) has nested 'key points', each of which might be individually relevant to one or more episodes, or one ore more other key-points (in other episodes).

Why a mind-map doesn't fit my needs

Oh, and by the way, both candles and oil lamps make use of a wick, so I might also need an episode to explain how wicks work, and link that to the oil-lamp and candle episodes (as something that "might be interesting")?

So even with very few episodes, there are a lot of links of different types and at different levels making a highly interconnected web. I think I need around 40 episodes in total all of which will have clusters of relationships.

As I have a software engineering background, this is starting to make me feel a bit as though I need a UML class-diagram to describe everything, and I'm trying to avoid that though, as I want to be able to colloborate with non-software people in building and reviewing the episode plan!

Does anyone know of a diagramming type that would fit to what I'm trying to do please? (This may not be the best SE site for this, it seemed closest though)

There is no type of diagram that is able to visualize the complex stucture of reality in a comprehensive manner.

Diagrams usually focus on one kind of relationship: a city map shows the spacial relation of buildings, a subway map shows how a subset of buildings (stations) are organized along subway lines but disregard their spacial relationship for the sake of facilitating navigation, a timetable shows the chronology of arrivals and departures in one station, a train route table lists the stops a train makes (and skips the stations the train doesn't service), and so on. Attempting to put, for example, all the information about a subway system into one graph will be overwhelming and impossible to comprehend.

You can represent the complex relationships by explaining them in the narrative of your video. That is what documentary films commonly do, and it is easy to follow and understand. You can also create different diagrams for different kinds of relationship, though they might be more helpful for you, when you attempt to keep track of what you need to mention, than for your audience.

I don't know of a specific way to diagram your structure, but I have a few ideas. My ideas aren't perfect, and most of it requires you brainstorming stuff, but I hope it helps nonetheless (or at least gives you a start).

The best option would be to download a complex software to help you with this (I won't point you to any, but there are lots out there).

I would recommend first making an overall map to cover episodes in general, as a simple and easy-to-understand starting point. All you need to do is connect the basic structure of the domain together.

This way you can connect episodes and ideas together, like this example from mindmeister.com: 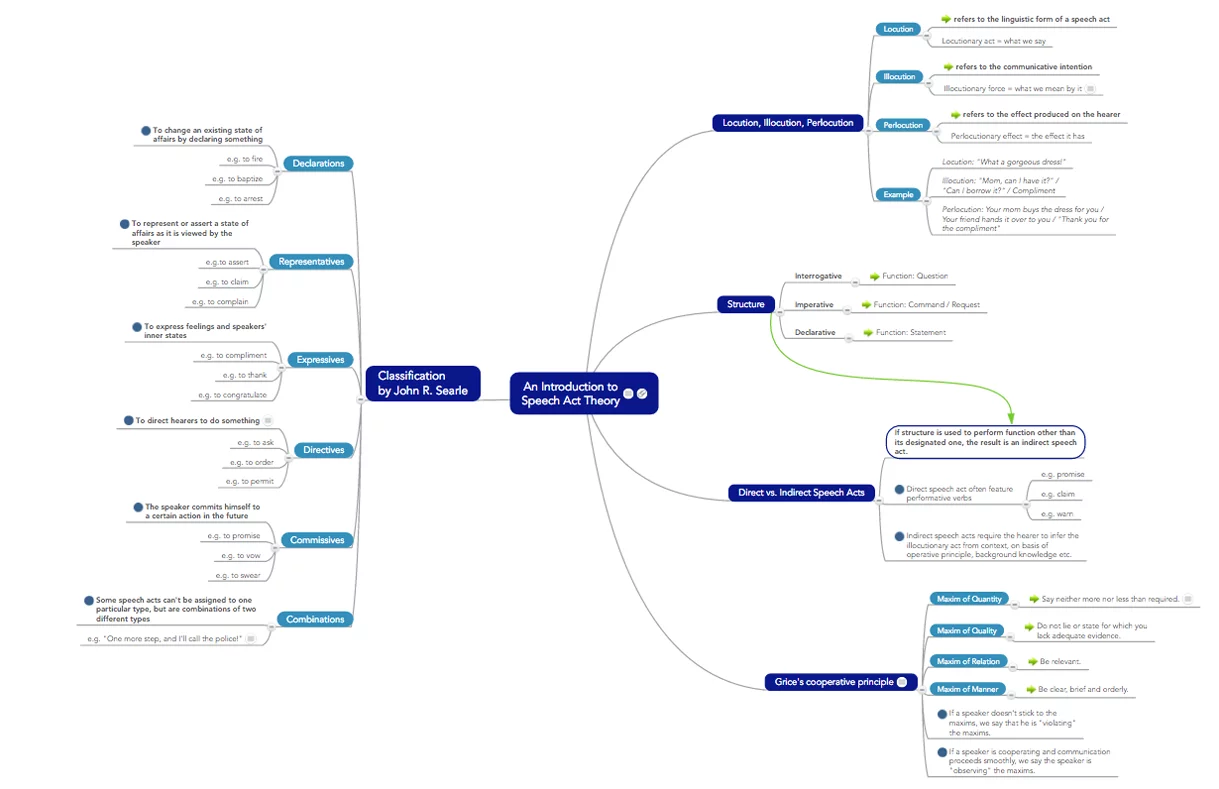 And then I would set up links for each episode that leads you to more complex charts to connect ideas and relationships per episode while also leading to more graphs.

Keep graphing and linking until you think you've got it all down.

Then, go through and look at your information. Is there a different way to organize it? I'm sure there will be, but I don't know what, it would be helpful to be looking at your info. Just pick the first map that comes to your mind and works for you and your info. Base it on what you've already created, how could it be better?

Using that map, if you suddenly see two things that could be connected, maybe drag them over to a separate visual or take notes on a physical paper.

Then, once you're sure you connected all the necessary info, get out a poster-sized paper and jot away as complex a chart you'd need! (this can also be done online but it sounds easier the old fashioned way)

This may include connecting ideas with lines, listing bullet points under connections, etc...

The way I chose in the end was to approach this as though it was a Systems Engineering task, and then develop some software (Android app) to match:

Not the answer you're looking for? Browse other questions tagged technical-writing non-fiction planning series or ask your own question.

12
How do you visualize plot structure?
4
How to work on a new software feature that affects different topics
4
Attracting and retaining volunteers to edit technical doc for open source projects
7
Labyrinth: old freeware to organise characters and plot
1
How do I label a graphic novel series?
4
Is my work fiction or non-fiction?
5
Podcast Script - Recurring Elements
5
How much episode recap is necessary in a tv-focused podcast?
6
How should we plan for translations' space needs when designing diagrams that require text?
2
How do you write character development in later entries of a series after relationships become established?