Is my magical item too cliche?

I hope that this question follows the rules.

It's kind of like an addiction, though, and the more that you play it, the deeper you get in said "addiction". The idea of an addictive magical item sounds kinda familiar, though... (cough One Ring cough)... at least, to me, it does. (Note: All magic is addictive, and the higher magic something has, the more addictive it is.)

It only works if the correct three moons are in the sky (this world has multiple moons); otherwise, it's a completely normal kalimba.

Is this too cliche, or should I keep it as it is?

It is not cliche:

Like I mentioned in comments, every good idea has been used before. Just by using a vague idea (an addictive magical item) and it happens that a different book with a different plot has also used a similar thing doesn't make your idea cliche.

When you say "addictive magical item" cliche doesn't come to mind, at all.

So, as long as you research books with similar items to make sure your item is not too similar (which I doubt it will be) and then you make any necessary changes, you should be fine.

For example, just because a book has a superhero character doesn't mean that no other book can have one. 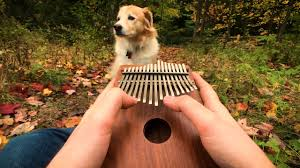 Dog: You want to give me a belly rub. Bard: You don't want to bite the mailman.

The One Ring wasn't addictive, like how opium or tobacco induce a positive experience that repeated use turns into a dependence with diminishing returns.

The invisibility the Ring gave the wearer was addictive since it conferred a sense of power to the user. Repeated use of the ring let the will of Sauron try to corrupt you -- worked on Smeagol, but no so much on Bilbo, two characters that used the ring a lot, and did a number on Frodo despite only wearing the ring once.

I don't think your notion of an addictive magical item is cliche. But, it's hard for me to imagine how the Kamilba would be addictive. Because you lose control of yourself when you gain control over others. That doesn't give me a sense of good times or euphoric bliss that would make someone want to repeat the experience. You make your audience give you all their money and one of them makes you stick your head in the deep fat fryer.

The notion that it only works when 3 moons are in the sky seems like a convenient story mechanic used to explain away how someone gets addicted to playing the instrument without experiencing the cost of being mentally dominated by their audience.

Your magical item is distinct from the One Ring because it simultaneously takes control of others and grants those others control over you.

One Kalimba to rule (and be ruled) by all...

Sounds like a lot of new territory to explore in that one. Definitely not cliche'.

What seems the underlying mechanism of the Kalimba is to bring multiple people together into a singular hive mind, regardless of who's actually playing. (The way you've described this the person playing isn't conferred any particular "power" over the others in earshot.)

On that note, what you have is something that's addictive not because it bestows power, but togetherness. For example for characters who are stoic and difficult to open up, it could be this thought-sharing would be enticing since thoughts are more abstract than words.

I wouldn't consider this is a cliché simply because the addictive mechanism is different.

Not the answer you're looking for? Browse other questions tagged fantasy cliches magic or ask your own question.

0
How can I create better suspense in this passage?
2
Writing an overempowered antagonist?
4
Who should I use for my POV character?
5
Is a bandit ambush a fatal, cliche mistake?
16
Is it bad storytelling to have things happen by complete chance?
3
Romance without cliche?
9
Alternatives to Second-Person POV Narration
10
I love the world and characters I've created for my story, but I dislike the plot. How can I proceed?
1
Is this character too cliche?
1
Is magical factions story too similar to Harry Potter?