Is the word “coloured” offensive when writing about Apartheid?

I am writing a paper on Aparthied and I was going to use the word "coloured" in it, but I wasn't sure if it would be offensive or not. For context, it was a word used in South Africa to describe people of mixed descent. If it is offensive, what are some other words I could use instead?

Most notably, these terms do not refer to mixed-race people in general, but only to certain groups of mixed-race people of a certain heritage and cultural identity. (That is, a foreigner of mixed decent would not be referred to as coloured).

In my experience as a native South African, it isn't offensive and is used commonly by all groups of people. "coloured" is the correct term to refer to this group of people.

For example, the government statistics department uses this term in the 2019 population estimates.

And google news in South Africa reveals that the word "coloured" occurs in news headlines. 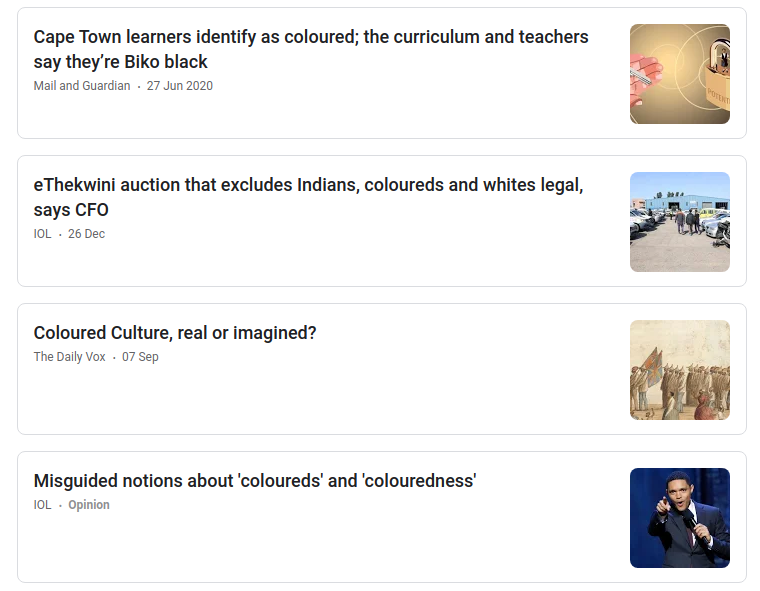 That said, there have been some attempts to remove the word from general use:

"The unsettling meanings of coloured identity and why it should be challenged", News24 18 Jun 2018

These were the only two articles I found, they're from 2018. I'm not sure what has happened since. The term remains in common usage.

I know in other parts of the world this has other connotations, but here in South Africa it is generally acceptable. I'd recommend adding a note that it is the correct term in your paper so that the reader is aware that it is non-offensive.

Who is your primary audience? As @stan's answer explained, in South Africa the term is not generally seen as offensive... in the United States, however, it's very much dated and is mildly offensive and has a more broad meaning (generally it refers to anyone of African Descent, regardless if they are mixed race or not, and at times may refer to anyone who has non-white skin: African, Mixed-Race, Arabs, Native Americans, Indians/Southeast Asians, Far East Asians, Polynisians, Hispanic Latino, ect.) though this is more modern. The closest favorable term is "People of Color" (always used in that exact context) generally covers most people who have "non-white" skin tones/

Generally among the U.S. and European readers, the term "Mixed-Race" or "Biracial" are much more acceptable these days, with "Biracial" seen as more academic in terms and Mixed-Race being more vernacular. In the U.S. at least, most official forms that ask for race will normally ask someone to fill all that apply. If the data is used in statistics, typically checking more than one box will qualify as "biracial" or "mixed race" in the statistics reported... they are also always optional, as some people do not like to report their race for any number of reasons.

Edit: Since you are specifically writing about a term related to South African Apartheid, upon your first use of the word, put it in quotation marks ("") and immediately define the intended definition. This helps readers understand that the term means something different in South African dialect of English... this is a fairly common occurance between dialects. For example, telling a Brit and an American "I'll knock you up in the morning" mean two very different things. The former hears "I'll knock on your door to wake you up" while the later hears "I will get you pregnant." And it can occasionally occur within a country as well (In the U.S. you can almost guess what part of the nation someone hails from by what term the use when requesting a carbonated beverage. Coastal residents (East and West) will ask for a Soda, while those living in the mid-west interior ask for a Pop. And a third minority faction who live in the south will ask for a coke (as a generic term for any kind of carbonated drink, not the brand name Coke owned by Coca-Cola. It doesn't even have to be a brown soda to be called "coke").

Why not use the African/Dutch word "kleurling"? It just as historical and cultural accurate as "coloured" in this context. Your readers will learn both another African/Dutch word besides "Apartheid" and there is less chance someone will be offended.

It's actually a bit tricky at the moment.

If you are writing historically, and addressing the apartheid classification, mentioning that someone was classified as coloured would not be offensive.

Just remember that these days, in SA, the term "coloured" is specificaly used for the cultural grouping of people who are mainly of Khoi/San descent, rather than for people of mixed race as it was once used in the US.

However, some of the actual community here find it offensive, while others use it with pride.

Some South-Africans of Khoi/San descent refer to themselves as "coloured" others promote the term "bruin mense" literally meaning brown people in Afrikaans, while others prefer "Khoi-San".

However, the term "kleurling" is pretty much always deemed offensive in SA, so really, really don't use that except to point out that under Apartheid the term was used.

Not the answer you're looking for? Browse other questions tagged academic-writing racism or ask your own question.

15
Is it fine to use link shorteners for research paper citations?
2
Self-contained software environment for authoring research papers
6
How Important are essay writing conventions in the university level and above?
3
Is there an alternative to using signposts or questions in essays?
13
How can I distance myself from an article published under my name, with edits I disagree with?
6
Early investment in a character who “learns better”
1
Does the excessive use of parentheses around part of a word make writing fuzzy?
10
Is the often used black and white symbolism inherently racist?
3
Introduction Techinques
3
Is it bad to overuse the words 'that' and 'which', and how can you avoid doing so?