Tips for describing features of unusual place that I often visit

I'm having problems describing certain parts of a place that I usually visit. Here are some pictures: 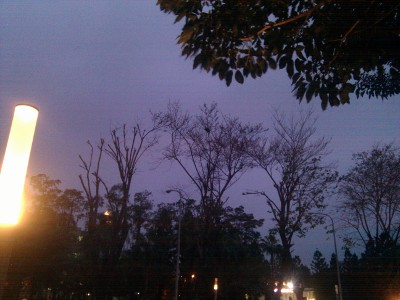 Well, here is the description.

The darkness and fog made it hard for Jun to see the end of the sidewalk. There were no people around, and the streets were unusually quiet. After walking a few meters, he spotted a large wooden platform and decided to sit there. He pulled a Busch beer from is bag, opened it, and looked up. In front of him, there was a sewage canal that was surrounded by a handrail and streetlights.

A minute or two passed when Jun heard the sound of a second can opening. He looked to his side and realized that someone was sitting just a few meters away from him. It was a girl. She was looking up. Something at the other side of the sewage canal.

Jun glanced his watch. It was 2 A.M. What is a girl doing here at this time, he wondered. He tried following her line of vision to the other side of the canal. It took him some time to make out the shape. It looked like a tree. A standing dead tree. It had a grayish color and had long branches.

After finishing his can, he pulled another one from his bag and continued staring at the decayed tree. He glanced to the girl from time to time, but she never never took off her eyes away from the tree.

Jun woke up in his bed with a terrible headache, wondering how he had reached home. His bag was lying on the floor with nine empty beer cans inside. An hour or two passed when the phone called. He let it ring for moment and then picked up the receiver.

Beyond simply finding words for these particular items, I would like to know how to figure out good descriptions on my own in similar cases.

Doing research is part of being a writer. So, don't know what that pavilion is called? Find out. Look online, look around the thing to see if there's a plaque that may give you a hint, heck, you could even ask some people in the area, like cafe workers.

That said, you don't necessarily need to know what it is:

...spotted a large wooden platform with an asian-looking arbor over it. It looked vaguely Shinto, not that Jun's experience with oriental shrines extended much past martial arts movies.

But that's only if you need to focus that much attention on it. I think the problem you're running into has less to do with the wooden platform and more to do with over-describing and under-showing the scene. That is, you've basically got a bullet point list of what Jun sees and does. This takes a scene with some very interesting concepts (the staring girl, the dead tree, the blackout), and dulls and flattens it.

Compare your first two paragraphs to this:

The darkness and fog muffled the street. Jun could barely see to the end of the sidewalk, so he felt, more than saw, his way along. He kept the parked scooters rising and falling in the mist like chained derelicts to his left and the dead iron ladder of the sewage canal's railing stretching to infinity on the right. He'd steer between the two, and eventually he'd be home.

Eventually. He wasn't quite ready to get there just yet.

A wooden pavilion shaped itself out of the gloom and Jun sat down. A couple of cans of beer in his backpack called to him so he open one, drank, and pondered the dark wavelets in the canal.

The hiss-click of another can of beer startled Jun out of his reverie. There was a girl sitting on the far end of the pavilion, her legs dangling over the sides. Had she been there the whole time? He watched her drink the beer down in one long swallow, her eyes closed, her throat bobbing in time.

She didn't seem to notice him. Instead she stared across the canal, the beer can, now empty, forgotten in her lap.

This isn't necessarily the best way to write this, but it shows you that you don't have to tell the reader the boring bits of how a character moves through space (X meters, spotting, looking this way and that) -- their mind will fill in those blanks.

The blanks they can't fill in are how the scene feels -- and how it'll make them (the readers) feel. This is texture, and you have to provide that. And that can't be done by listing facts.

Consider, for instance, when Jun first sees the dead tree. You write:

It took him some time to make up the shape. It looked like a tree. A standing dead tree. It had a grayish color and had long branches.

"It had a grayish color and had long branches." Really? No! This tree is a pivotal element on the scene that, if my impression is right, gives the scene's spooky nature a reason for being. I mean, the whole thing was set up for the girl to stare at that dead tree, right? So why not something like:

"It stood there like a forgotten evil, its bark the shriveled gray of a drowned man's flesh, its skeletal branches grasping through streamers of murky night air, lusting after the memory of its trembling victims.

Both here and and in the first paragraph with the scooters and canal railing, I'm using similes and adjectives to give these elements some punch.

I'll grant you, I am over-doing it a bit. The tree thing especially is over the top. But that's just for purposes of example to make my point.

When describing a setting you don't want to describe everything, which inevitably leads to summarization. Instead, you want to use a few elements shown in loving, delicious detail to set the whole scene for you.

So remember, it's about texture.

4
Is it a bad idea to have all the action in the beginning and all the dialogue in the end?

3
Critique a short essay
4
Does the following piece have too much dry narration (mundane tasks, moving about)?
3
How do I write in the language of a strict, serious character without using too much exposition?
7
Sentence openings variations to avoid repeating determiners and pronounces
9
How to describe a diverse set of characters without falling into purple prose or exoticism?
7
How to realistically describe pain?
0
Problems with impersonating someone of the other gender in high school