Why does variety in sentence length and structure feel engaging?

An obvious answer might be "because people like variety", but this doesn't feel right. If this was the case, why doesn't using a different font family (or color) for each word feel engaging? What is it about us humans that makes us attracted to this particular type of variety?

Because the more variety in sentence structure and words makes it come off less repetitive. When you’re repetitive, it literally sounds like you’re a machine. Example:

I looked down the street at the coffee shop. I walked towards the shop, crossing the street to get to the door. I stopped in front of it and peered inside, just to make sure it was actually open. I took a deep breath as I walked inside. The familiar smell of coffee filled my nose, and the barista greeted me behind the counter. Et cetera et cetera.

My all-time number one favorite book on writing, Make Your Words Work by Gary Provost explains exactly why variation and sentence structure is so important in a section the author titles: Music. The sound of the words make music in the readers head. 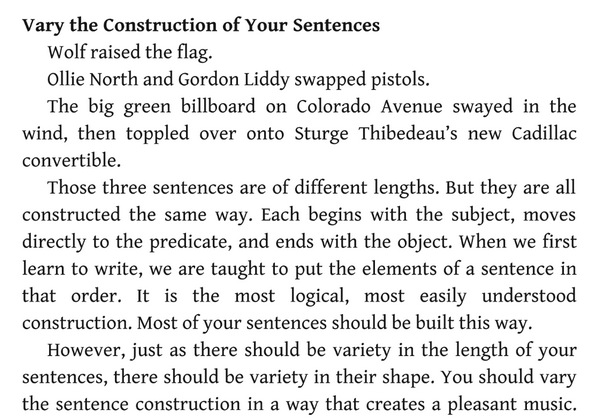 The book continues with a great many examples and explains exactly how to create this affect and why it is so important.

Compare that one to :

Words that flow from the author tend to make quieter noises in the head of the reader.

What you really want are sentences of varying length and construction. When you create sentences with variety it can literally wake the reader up.

Here's my example using one of my all-time favorite novel beginnings, The Partner, by John Grisham. I've shortened up the example as to not take too long.

They found him in Ponta Porã; a pleasant little town in Brazil, on the border of Paraguay, in a land still known as the Frontier.

They found him living in a shaded brick house on Rua Tiradentes, a wide avenue with trees down the center and barefoot boys dribbling soccer balls along the hot pavement.

Here's my example with similar structure and sound.

He discovered it before anyone else in the sleepy town of Philsbruck, Minnesota had even opened their eyes for the day. He discovered it buried under a wagon, behind Tom's house in a large field where he and Tom had ridden motorcycles, when they were younger and still friends.

Mine isn't exactly the same, but it is similar. There is some repetition. There is some mystery about what he found and who he is. You begin to see how the two sound similar in the reader's head.

Not the answer you're looking for? Browse other questions tagged sentence-structure or ask your own question.