Which words should not be capitalized in Title Case?

I would need a list of all words that are not capitalized in English titles.

I would also like to make sure if it's true, that all first and last words of a title are capitalized no matter what.

I'd really appreciate your help.

If you are referring to "title case," where some words are capitalized and some aren't, there is no one standard rule.

But the Chicago Manual of Style says:

Use lowercase for articles (a, an, the), coordinating conjunctions (and, but, or, for, nor), and prepositions, regardless of length, unless they are the first or last word of the title. 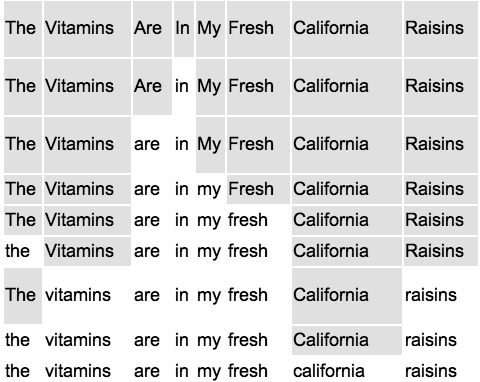 Note that some people prefer using "sentence case" in titles, where you only capitalize words as you would in a normal sentence. This is also known as "Down style." Apparently this is more typical in the UK than the USA, but opinions vary (as you might expect) on which is the correct form, or if there is even one.

It is also often up to the authors/editors discretion, for example if your title was fairly long (such as an essay) it might look very strange if a couple of words are lowercase. Also, of course, it should be consistent throughout, a lot of people seem to forget that!

The first letter of the first word is always capitalized (no ifs, ands, or buts... unless you lead with if, and, but as the first word of your title.)

In Grammar you have two categories of words: Content Words and Function Words. Content words are words with a very specific meaning or meanings and include Nouns, Verbs, Adjectives, and Adverbs. All Content Words in a title must be capitalized.

Function Words are words with nebulousness meaning or meaning that will change meaning based on usage with respect to other words in a sentance of statement. Not all function words should be lower case, but most are acceptable. Pronouns usually are capitalized, especially when they are the subject of the title sentence or are possessives (pronouns that denote ownership). As are interjections (Yeehaw! Gosh Darn! Drat!).

From there, each significant word in the title is capitalized, while the articles (a, an, the) conjunctions (and, or, but, nor), subordinate conjunctions (if, either, neither, nor, then, else, ect.) and occasionally adpostitions (words that reflect spacial or temporal relations with respect to other words, like before, in, on, above, below). While not a rule, Subordinates and Adpositions that exceed three letter spelling should be capitalized).

Finally, as a rule, when ordering books alphabetically by title, the word "The" is omitted if it is the first word in the title, and the Content word is used instead. If the book is a volume in a series, then it is ordered by release date under the serie's main title ("Harry Potter and the Philosopher's Stone" is the first book and will come before "Harry Potter and the Chamber of Secrets" despite "Chamber" taking alphabetical precedence to "Philosopher").

Not the answer you're looking for? Browse other questions tagged style titles or ask your own question.

2
Writing a newspaper article summary
7
How should I capitalise headlines for professional Web writing? (Sentence case vs title case)
7
Is there a book title generator that takes an input and outputs plausible titles with related words?
4
Condensing words, to condense or not?
1
A different question regarding titling a novel - Edited
6
Is Having Two Titles Bad Style?
2
How to search for titles of novels that are or begin with a word or phrase previously used as the title of many nonfictional works?
9
Reusing story title as chapter title
2
Using a prominent phrase from the title of a film in the body of an article, essay or paper, without referencing the title
19
Why are one-word titles so dominant in books, film, and games?