Starting from future smoothing your way to present

Exactly how you do it depends of course on your story. One way is to simply use them with no explanation and let the reader figure it out over time. Or you can indicate the past within the quotes themselves.

The Queen of the Tearling does something similar to what you're doing. Each chapter opens with a set aside quote at the top from a historian. Each is about the Queen and cites her words during this time of turmoil (the period the book is about). The first few I just glossed over, but then I figured out what was happening and went back and read them again (it took a while because this Queen has multiple names and we hadn't heard "The Glynn Queen" yet).

The novel (trilogy actually) itself is told as if the events were happening now. It's not in present tense but it has an immediacy about it (as most novels do). Yet it's not at all odd to have the "modern day" historian's quotes. The book is not framed such that the historian is presenting the material. More that the narrator is including some quotes to round the story out. 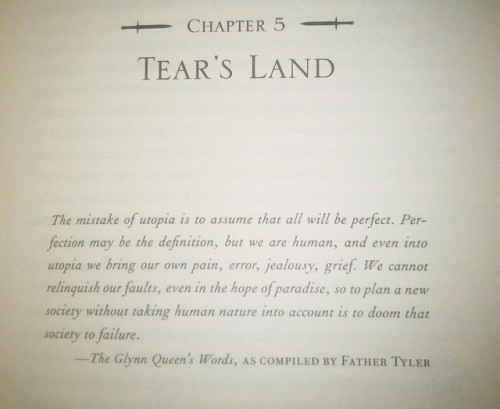 To deal with the grammatical part, just set the quote aside. If you have quotes before each chapter, change the margins and italicize it. You may also wish to create a line or other separation between it and the rest of the chapter.

If you just have one quote, and it starts the novel, put it into a prologue. Make it stand alone. If it's short, center it on the page and italicize it. It will set the stage for the rest.

"We have done it, friends, we are henceforth functionally immortal." -- Josh Briggs.

Josh had no idea he would say this, someday. In fact, he had no idea he'd go into research medicine; right now he was just trying to figure out why the left front wheel of his skateboard kept sticking, so he could finish this damn flyer route. It would take forever if he had to walk the whole thing.

He twisted the wheel, spun it, it seemed smooth. He didn't see anything fall out, but maybe he fixed it. Thirty seconds later, it caught again and threw him on the sidewalk. The pack of flyers unbalanced him and he scraped his elbow.

"Damn it!" He looked at it. Roughed up. A little blood, but not bleeding.

Screw college! he thought, but even as he did, he knew he didn't mean it. He had to go, wanted to go, and not just to please his mother. He had to get out of the damn neighborhood, and take her with him. Well, not this neighborhood, nobody needs to escape this neighborhood. Escaping his neighborhood was going to take some cash. Even if he were valedictorian -- as if he had a chance against Mark's spotless GPA -- still wouldn't mean a full ride scholarship, not from their third rate high school.

He sat on some rich bastard's manicured lawn, staring at his tumbled skate board, then pulled out his phone and called his mother.

"Hey. My skateboard is broke. I have to walk my route. Probably an hour late for dinner."

He listened, then said, "I probably have to replace a wheel. Yup. Okay." He hung up, rose, tucked the board under his arm and walked to the next house.

Just do it, from the present, referring to a future that has not yet happened. "Josh had no idea he would ..."

Not the answer you're looking for? Browse other questions tagged novel quotes time-depiction or ask your own question.

2
Is there a problem in switching from present to past for a backstory sequence?
1
Using present tense for events in the novels past
12
Can I switch from past tense to present tense in an epilogue?
4
In a novel that I'm writing, can a character quote a line from a movie or TV show?
2
Converting/rewriting present tense narratives to past tense gracefully. Not a question about verb conjugation
1
Flashforward Tense
7
A Question About Addressing The Reader?
7
20 Minutes into the Future - problem with setting the period