I'm currently writing a report where I have a table stating certain parameter values and their errors. Obviously I want the report to look nice, but since the errors of certain parameters vary by orders of magnitude, I'm not sure how to write it.

To provide more context: this is a computational physics report, and the numbers in the superscripts/subscripts represent the value that was added to the corresponding value to cause a 1% change in some function. 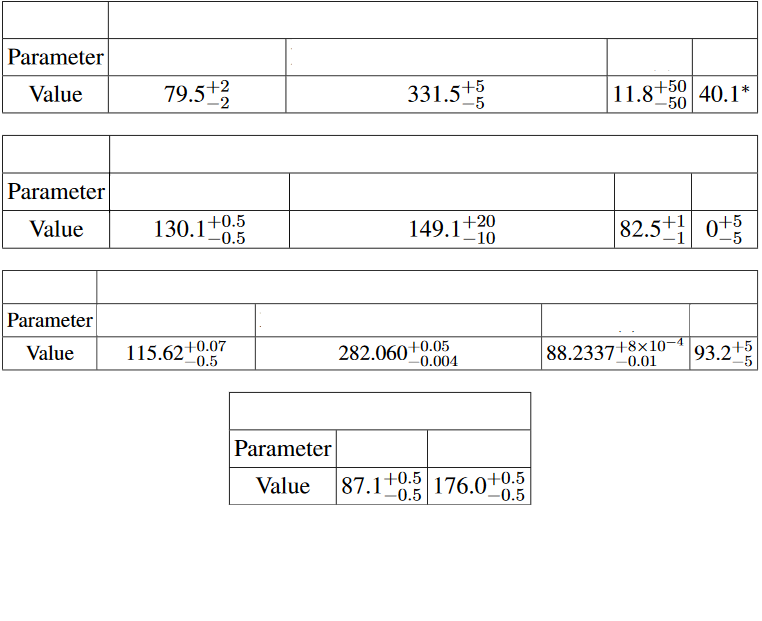 How should I be writing the errors and parameters?

You really should look at the style guide relevant to your field.

The APA Manual, for example, has an extensive section on tables and provides multiple examples for all common use cases. The relevant style guides for your field will be availiable in your university library.

Another option is to look at publications in your field and emulate their style. If you are at a point in your academic career where you write your first paper, even if only for a seminar, you must have seen other publications. Consult them.

It is unclear to me what your numbers mean and how they relate to each other, and you don't specify your field or relevant style, so it is impossible to provide a more specific answer to your question.

If I were your advisor I'd tell you to stop trying to save space or be "efficient" and spell it out, every time.

If you want to put those in a table, fine, but do one parameter per line. Stop trying to cram your results into a tiny space; the first rule of academic writing is clarity, and you are creating unnecessary confusion. And, as user37826 says, follow the style guide, or lacking that, previous publications in a respected journal. The presentation there is likely something readers are accustomed to seeing, and therefore achieve the goal of clarity.

First, I'd check if there's some style guide for the publication you are trying to publish in. If they have relevant guidance, that would override any general conventions.

Failing that, the convention in most scientific writing is that any number is assumed to be accurate to 1/2 of the magnitude of the last digit written. For example, if you write 182.04, then the real value is somewhere between 182.035 and 182.045. That's why, in scientific papers, 82.0 is not the same as 82.00. The second implies reliability to one more digit.

I see you have several examples where the possible plus is different from the possible minus. I'm not aware of any generally accepted convention to express this. If someone else on here knows of one, I'd be interested to hear it. Barring that, I think you'd have to invent a notation and explain it. Perhaps something like "182.4 +.1/-.2"? Sometimes writers give a range, like "value between 32.6 and 84.7". But that's probably less information than giving a number and an error range, as when you give a number, we generally assume that while it is not absolutely precise, that is the most likely value.

I suppose your sub/superscript method is such an invented notation. I THINK I get what you're saying, though some of your examples seem unlikely. Like 11.8 with +50 and -50? Like, you measured 11.8, but the real number could be from -38.2 to +61.8? The error could be 4 times the measured value? If that's not what you mean, you definitely need some explanation.

Not the answer you're looking for? Browse other questions tagged formatting scientific-publishing science graphics numerals or ask your own question.

1
Scientific Citation
7
Should I prefer long or short sentences in scientific writing?
0
figures and tables always on top of the page?
3
Should embedded figures/images be placed before or after they are referred to in text?
4
What is the image size in scientific paper if indicated as "a single, 1.5 or 2-column fitting image"?
4
Scientific article: How to say that with our result something could be done but hasn't
0
How to write a scientific journal?
1
What means of publishing yields best reputation in scientific community?
1
Explicit scientific syntax for academic writing (like a programming language but for scientific reports and publishing)?
2
Scientific report and capitalization