How to use 2 footnotes in the same word?

I have this Paragraph and I was wondering if it's possible to do what is underlined in the figure (RED), or if you know how to do this in another way, let me know. Basically the "DOM.Element" is a child of WEB API. So there are 2 things there. The "DOM" & "Element".

How to use multiple footnotes in this case? Is that a good way of doing it? TBH I haven't seen anything like it before. 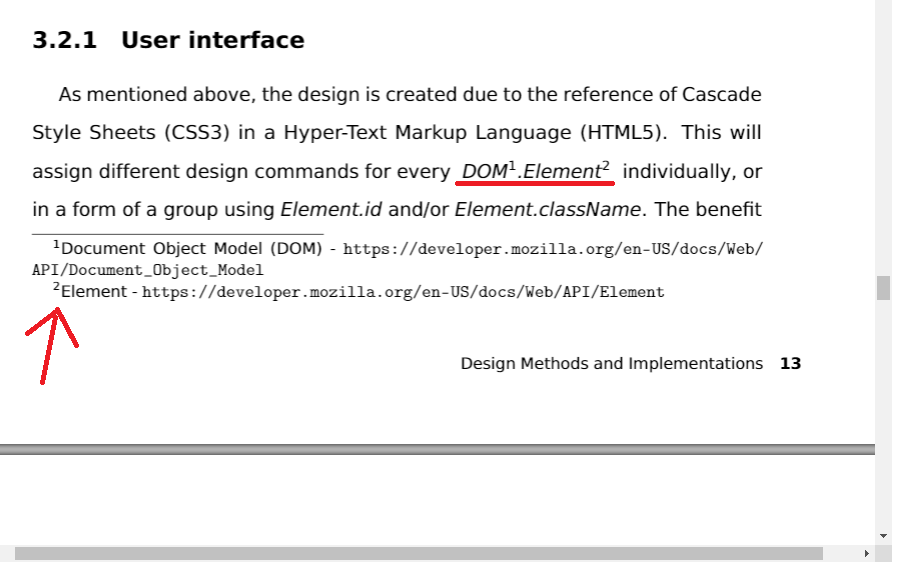 For the LaTex folks:

Just use "DOM element" instead.

"DOM.Element" is not actually a word. It is way used to represent a DOM element in a programming context. In that context it would indeed behave like word and your usage might be correct.

However the sentence or the text is not in that kind of context. If it was you'd have no need to footnote either "DOM" or "Element". This is a general explanation using normal English so you should use normal words and expressions.

Same is true of element id and class. I understand what you are trying here but the text is talking about the general concepts on a very general level not about the specific types in a programming context.

I am guessing that later in the text it gets more technical and that is where the usage comes from?

CSS is from "Cascading StyleSheets". Not "Cascade".

7
Is it acceptable to use many footnotes to share additional ideas?
7
How should footnotes be used in non-paginated media?
3
Usage of margin notes vs. footnotes
0
How to properly cite a source in your footnotes?
3
Footnotes when using in-text citation style
7
Footnotes for Translation purposes
9
The use of footnotes to translate foreign words in a novel
4
Is it ok to use long footnotes?
0
MS Word correct the style of footnotes
0
Citing quotes/footnotes