How to tell readers your story is a re-imagination of a popular story?

If for example, I were to rewrite a story heavily inspired by Romeo and Juliet, but placed it in a complete different setting. Do you have to say it? Also, do you mention it in the title that's it's a reimagining, or would you put it in the preface. I see it a lot in movies, but sometimes, they don't put any disclaimer or anything, and sometimes it's in the title and sometimes it's not. Is there a guideline on how to inform your readers in an ethical way?

Romeo and Juliet is in the public domain. And it's not even the source material - Shakespeare borrowed the story from somewhere else, (Pyramus and Thysbe is one very similar story, and Ovid didn't invent it either) and retold it in the form of the famous play. That means you're free to rework the source material.

The same is true of common fairy tales, and for works that are in fact original, but already in the public domain. For example, Rudyard Kipling's The Jungle Book recently got retold by Neil Gaiman as The Graveyard Book. No mentions of the original - it's for the reader to figure it out. (Technically, he mentioned it in the Acknowledgements section, but that's not a legal requirement).

Retellings of older stories are common enough, and fall within the realm of intertextuality. That's when there is a strong relationship between two texts, and the latter is better understood in light of the former.

If you feel strongly that you should acknowledge the influence of another work on yours, you can always mention it in the Acknowledgement section in the end. But I do not recall James Joyce, for example, formally acknowledging that Ulysses is strongly connected to the Iliad. He expected readers to be smart enough to figure that out by themselves (from the title, for one thing).

If your inspiration story is in the public domain (which all of Shakespeare is), you have no legal obligation to disclose your source material. Though with Shakespeare, people will of course figure it out.

The musical West Side Story is a well-known retelling of Romeo and Juliet. It was in fact pitched to producers as such and of course all the reviews mention it.

West Side Story is a musical with book by Arthur Laurents, music by Leonard Bernstein and lyrics by Stephen Sondheim. It was inspired by William Shakespeare's play Romeo and Juliet. (ref)

A 1961 movie poster doesn't mention R&J though (I can't read the fine print so maybe it's there). 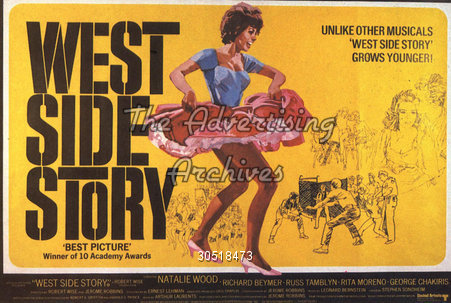 If your inspiration story is not in the public domain, then you need permission from the copyright holders before you proceed. If they grant it, they will advise you on how to cite.

But what if your inspiration story is in the public domain but obscure? I would put it in the acknowledgments, if not the title page.

And if the story is not public domain but your inspiration is slight? That's the trickier one. The answer is "it depends." But err on the side of caution and get permission. Or change your story even more.

I would suggest you read this link (with actual lawyers responding).

By Pamela Koslyn, intellectual property rights attorney: Copyright infringement is a difficult concept and not easily explained in a forum like Avvo. Basically, courts will look at the total look and feel of two works, and compare how "substantially similar" they are. The entire work is considered, but its unprotectable elements get disregarded. Disregarded elements include themes, ideas, facts, and obligatory to the genre or cliche scenes , called "scenes a faire," such as doomed young lovers, with a scene of angry parents forbidding the love. The original creative elements, such as tone, setting, dialogue, characters, pace, etc. etc. are compared point by point, and if enough of them align, there's infringment, especially if you can also show access to the work. Where access is obvious because, in your example, "Harry Potter" is a famous published work, then the standards for similarity are lower, and where the access is questionable, more similarity is required to find infringement.

Plot points, or "beats" in tv-speak, are among the creative elements that can be infringed, so it's not true that plots aren't part of a what's protected in a work's copyright. [... more material by Ms. Koslyn clipped for brevity ...]

Ms. Koslyn's Disclaimer: Please note that this answer does not constitute legal advice, and should not be relied on, since each state has different laws, each situation is fact specific, and it is impossible to evaluate a legal problem without a comprehensive consultation and review of all the facts and documents at issue. This answer does not create an attorney-client relationship.

As long as you're not committing flatout plagiarism, it's not strictly unethical to write a story that is inspired entirely or in part by another work.

It's no secret that character of Sherlock Holmes was influenced by Edger Allen Poe's C. Auguste Dupin. In fact if you read Scandal in Bohemia, you can see the similarities between Doyle's story and The Purloined Letter, which was published much earlier.

Using your example, Shakespearean works have inspired countless works. Forbidden Planet - The Tempest. The Lion King - Hamlet A major storyline in Gargoyles was based on a reimagining of Macbeth.

No one flatout said The Lion King was inspired by Hamlet. But the story is still there and it's not a stretch to see where the inspiration came from.

Question is, why would you want to? (I'm ignoring copyright issues.)

Good example: consider the Star Trek episode "Balance of Terror". Does it add anything to the episode to make a point of saying it's a science-fiction version of the World War 2-set film The Enemy Below? Not really. Does it matter that a classic film like Forbidden Planet is an SF retelling of The Tempest? Not really.

The story should stand on its own. Mentioning the original inspiration seems to be almost saying to the reader "Hey, the stuff in here that doesn't make sense/seems dumb/you don't like? Don't blame me. It's the other writer's fault." On the other hand the risk is there that you could produce something really good and the readers give the credit to the older writer. After all, you're just the hack who changed the rabbit in the story to a smeerp, and the other guy did all the hard lifting.

As you have selected, it is not necessary to credit a story which is in the public domain. However, I notice that several of your questions have not been answered. I'll address them.

Also, do you mention it in the title that's it's a reimagining, or would you put it in the preface.

You certainly can mention it either way, even though you don't have to. As an example, if you want to tell the story on a Mars colony in the future, you could title it, "Romeo and Juliet and Olympus Mons", or something similar in order to pique the interest. A well-known and prolific SF author, David Drake, is famous for his retelling of historical battles in a far-future setting, and he has been very forthcoming in his forwards as to exactly when and where the original occurred.

Movies and TV are a somewhat different story. The industries are full of lawsuits about misappropriation of stories, and some of them have been quite successful. In general, a movie which actually uses an existing story will negotiate with the owners of the story and pay for the use. In such cases, no attribution is normally made. There are exceptions: "Breaker Morant" and "JFK" both included book credits at the end of the movie. But in general, it is not ethical (or legal) for a movie to make use of a non-public domain story without paying for it, let alone without giving credit.

I would like to suggest something else to consider.

Depending on the nature of the story, working a little awareness of the classic scenes from Shakespeare's Romeo & Juliet into the storyline in an internally consistent way could help things along a little bit. EG is poison or suicide a part of the plot line? Play on the similarity, by having your main characters be Shakespeare fans - or fans of any one of the remakes of that classic tale:

According to this page: http://www.tcm.com/this-month/article/191916%7C0/Romeo-and-Juliet.html

there are more than 30 versions in the movies. This gives a wealth of material that will be very accessable to your characters, and that they could get a teeny bit obsessive over

Not the answer you're looking for? Browse other questions tagged fiction legal ethics or ask your own question.

9
When does inspiration across artforms become plagiarism
6
Are fictional inventions trademarked?

9
What genre is a book in an imaginary world but no other fantasy element?
5
Is there a known technique for giving your readers chills?
0
Does the following dialogue sound stiff and formal?
1
How do you find the right pacing in your story?
16
How to refer to clothes without modern words ? (e.g: t-shirt)
26
How to know if your own story is surprising?
2
How to describe a scene from imagination?
11
How do I write real-world stories separate from my country of origin?
4
How could the disregard for both plot and dialogue tell the story?
2
How exactly can a writer write a horror story without making it so scary to the point where it's actually hard to read or watch?