Any tip on naming a star, planet, geographical features and other non-living things? [closed]

I was wondering if "Spear" or "The Spear" could be the name of a planet. But I can't find a single reason to name a planet that way, and even if there were it just sounds horribly stupid. What are the general rules and principles you should to follow to name non-living things?

In human languages, most translations of the Earth are just "the Earth", or "the World", or "the Land". Once in a while, you will find a proper name ("Gaia") of a God, or a reference to a God ("God's House"). The same is probably true of the Sun; the sun is the sun, it is just a label everyone understands, and knows what it means. There doesn't have to be any deeper mythological reason.

In all those cases, the planet is singular; they need a name to refer to a singular object, so it makes no difference what it is.

Your name would need some mythological reason involving OTHER planets in order to distinguish THIS planet from them, some reason THIS planet is something as specific as "The Spear" and other planets are presumably named after other objects. Perhaps its role in an interplanetary war.

This is a chart of the stars in the Ursa Major: 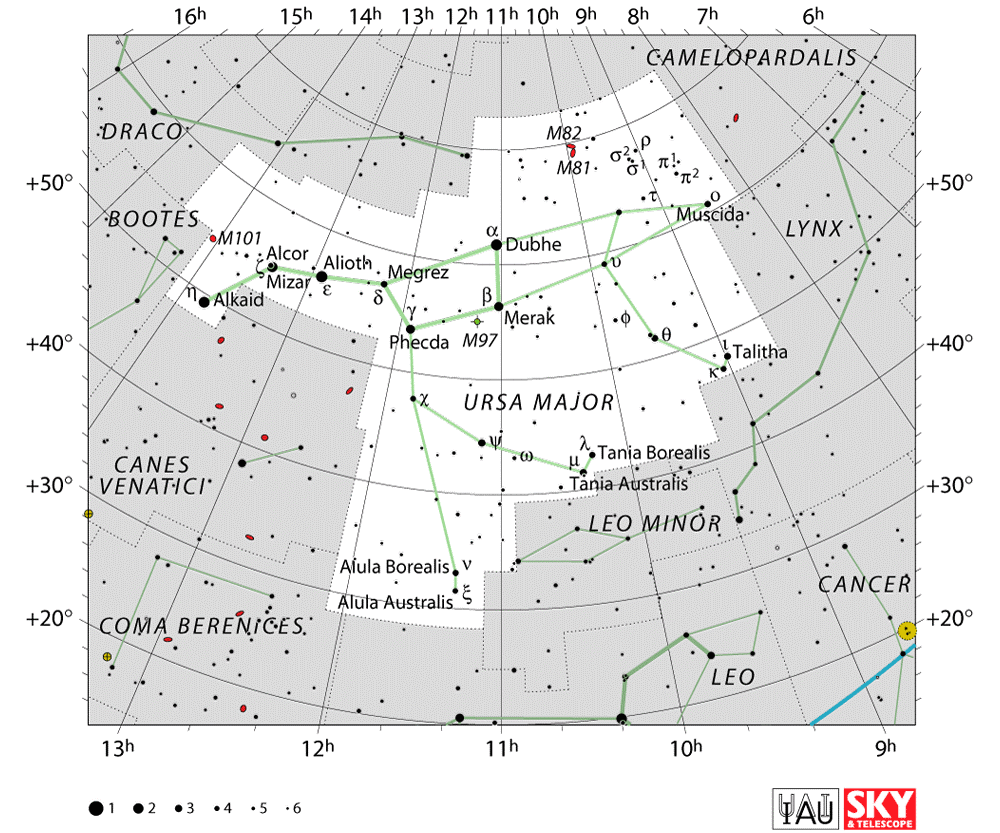 And here, straight out from Wikipedia, is an explanation of the name "Tania Borealis", given to the star also known as Lambda Ursae Majoris:

It bore the traditional names Tania (shared with Mu Ursae Majoris) and Tania Borealis. Tania comes from the Arabic phrase Al Fiḳrah al Thānia 'the Second Spring (of the Gazelle)'.[14] and Borealis (originally borealis[15]) is Latin for 'the north side'. In 2016, the International Astronomical Union organized a Working Group on Star Names (WGSN)[16] to catalog and standardize proper names for stars. The WGSN's first bulletin of July 2016[17] included a table of the first two batches of names approved by the WGSN; which included Tania Borealis for this star.

So, what do we have here? A single star with at least three names spanning four languages and cultures: the modern Lambda Ursae Majoris, the arabic Thānia, the latin adjective Borealis, and the chinese Zhōng Tái yī.

There is a reason and a sort of method behind those names, but after all they are arbitrary. Citing from the Working Group on Star Names guidelines:

So, they are mostly heritage. A lot of star have arabic names because the Arab culture gave rise to many great astronomers. Had they been Finnish, we would be using Finnish name. And of course, almost every culture in history had its own name for the most relevant star; today we're talking about just the ones that "stuck around".

This said, there is no valid reason why "The Spear" should be less plausible than Star of First Middle Step or the Second Spring.

I'm aware that you are talking about a planet, but it makes little difference. The choice of names for celestial bodies, if we are not talking about highly scientific names, is often a matter of culture. The planet Venus was often called "Vesper Star" because it was mistaken for a star which appeared in the evenings. And after all the common name Venus is no better, being the ancient latin name for a goddess.

There might be a particular astronomical configuration where your planet appears "as the tip of a spear", hence the name, without even having to dabble with mythology.

Just think about where or why this name came from in your wordlbuilding. If the explanation makes sense, the name will make sense and will eventually sound familiar to the reader, as much as "canis major" or "ursa minor" or "polaris star" are today. If you need to name an entire constellation, thought, you may want to look at what astronomers did.

A whole constellation full of unique names will fill your sky of impossible-to-remember stars, while astronomers, as scientist, will try to give names under a convention or a mnemonic method. But truth to be told, you probably don't need to wordlbuild this far on the topic.

I would say that it's nowhere near as crazy as some of the other planet names that are out there.

However, I think you should put your writing creativity cap on and come up with a good reason for calling it that - something related to your story and the history of the people in it.

Perhaps there was a great war of the ancestors, and a mighty goddess threw her spear in a rage and it flew so high it stuck in the sky, where you can still see it to this day.

Hill 937 site of the battle of hamburger hill.

There are many many possible ways to do it...

72 degree on the YZ plane

My point is.. given the infinite cosmos... Earthlings would only name a planet if there is any significance at all to them. I would imagine the same would go for other spacefaring species.

Not the answer you're looking for? Browse other questions tagged creative-writing naming or ask your own question.

9
Potential confusion: referring to home planet as “Earth”
6
Does it confuse readers if a character name is similar to the name of an object?
2
Referring to characters that are too familiar for a name
6
Stop thinking own work is stupid
6
What pitfalls and guidelines are good to know when picking character names?
16
Is it bad storytelling to have things happen by complete chance?
1
Ensuring that a line or a passage doesn't get mistakenly identified as plagiarism
17
Naming Characters after Friends/Family
4
How can I learn about the aesthetic rules behind composing new names for things?