I understand the reasons so many people have dislike for adverbs in writing, but I'm struggling with how to find a real balance.

For example, these adverbs can die:

I have a much harder time with:

I feel that maybe I should approach it like this: Kill off adverbs for which a natural or more interesting replacement exists. Accept what you can't change for the rest.

Is that a good way to approach it, or am I missing a better way?

"She felt lonely" is bland compared to a description of how she stood apart and longed to be part of the conversation.

You've only paraphrased rather than presented the alternative that avoids the word lonely, but I agree it would be a better approach. It is not, however, the best one. Note that in "She was lonely" the last word is actually an adjective, but there's a reason it still doesn't work. (And it's not just down to whether adjectives are also problematic, which some say it is and some say it isn't.) There's a show-don't-tell issue to consider, whether you tell me she felt lonely, or tell me she longed to be in the conversation. Ideally you'd do something more like, "Alone at her table, Ellen glanced to another half-full nearby, where laughter interrupted the animated chit-chat. They wouldn't admit to having room for one more." It gets in her head more.

"She stood alone by the bar." Standing there by herself is the very point of the sentence. "She was alone as she stood by the bar" is wordier and clumsier and adds nothing to the original. Almost any other way of wording it suffers the same problem.

As noted above, changing stood to was makes alone an adjective. Is the sentence really any better? To be honest, the real issue is -ly adverbs. This book statistically analysed literature and found adverbs overall aren't any rarer in the most respected writing, but -ly adverbs are.

Having said that, it's always worth doing writing exercises that help you think of more options. If we literally ban adverbs and adjectives from the sentence, what can we do? Example: "She stood at the bar with no-one to threaten her elbow room." Whether it's better this way is a tough call!

Imagine that happened in TV or film. How do you know the lean is conspiratorial? What you know is how the actor moved, how their face contorted, and what they said and how. So mirror that; imagine an actor playing out your scene, then write what you see. "He didn't lean closer until looking left and right, and it wasn't for cars." The eagle-eyed would argue closer is an adverb there, but again, it's not the bad kind. (I say "argue" rather than "know" because some grammarians see adverbs as an "other" dumping ground in grammar. If you've ever caught someone saying, "actually, that's a determiner", you'll have a feel for where this goes.)

"She gradually regained her composure." Dropping the adverb changes the meaning and I don't see a way to clean that up.

She took a while to regain her composure. Well, I say a while; feel free to say "too long" or "a little too long". (Is "a little" an adverb? I guess!)

That's exactly the way to do it. The anti-adverb advice, like much writing advice, should not be interpreted as "This rule has been announced", but as "People make certain mistakes far more often than others". If you've thought about why an adverb is still in your writing, you were probably right to keep it in. I bet at least some of the substitutions I've described herein seemed to you like trying too hard.

You're on the right track. Replace the verb and adverb construction with a more exact verb.

"He looked over his shoulder, then leaned in."

"She stood alone at the bar."

"She stood at the bar, with an empty cocktail glass and a dirty ashtray her only companions."

"She stood at the bar, a lonely figure in black."

"She stood at the deserted bar."

"She gradually regained her composure."

"She teetered on the edge of panic for a few endless moments, then forced herself to regain her composure."

or, describe what she is doing while she regains her composure.

"She brought her cigarette to her lips again and again, only to let it fall without taking a drag. Her cherry red lipstick stained the filter of the long menthol. She paced between the phone and sofa, desperate to collapse into the overstuffed cushions but too scared to the leave the phone. She stopped halfway to the phone and rubbed her eyes.

"I can do this. I have to do this." she whispered.

Closing her eyes brought a comforting darkness. She took a deep breath and the color began to return to her cheeks.

or, for a shorter example,

"She glowered at him and filled her lungs with enough air for an epic screech, but instead of screeching she compressed her lips in a grim line. Her complexion mellowed from a purplish hue to a somewhat less outraged red."

It is the overuse and abuse of adverbs that people caution against.

Sometimes the adverb is the perfect choice, communicating with precision the intent and tone of the author.

The extinction of adverbs is overkill. There is nothing wrong with the proper use of modifiers.

You have a good instinct here. One should never ignore an opportunity to improve the natural flow and interest of one’s prose.

I find myself using the occasional ‘eventually‘ and ‘gradually‘ and even a few ‘softly’, but if on reading it, I feel the need to change a word, I do.

There is a hierarchy of significance in words, with nouns and verbs perceived as pure metal and adjectives and adverbs being less valuable. Less valuable does not render them useless, just less significant. All sentences have a subject and a verb, but that does not mean that is all that we can use.

If that were so, we would be limiting ourselves to the See Spot run kind of sentences we encountered as we learned to read. Complexity of thought invites shades of colour and precision, which often involves the use of modifiers. 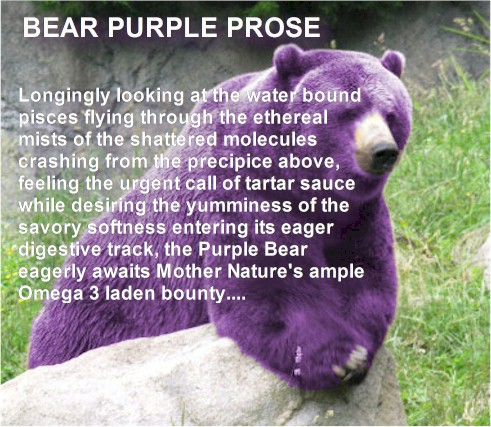 If the reader has to stop and think about every single word in a paragraph, then there is something wrong with the paragraph. In the example, a typical reader probably has to think, "what on earth is pisces? Hmmm... oh, fish." Then, that reader sees ethereal, shattered molecules, precipice, blah blah blah. The modern reader has no time for looking up every single word. What is more likely is that the modern reader will stop reading and close your book; the reader will not even buy it, and you will receive no payment in royalties.

All this talk about good writing style is about what the modern reader wants, so that the reader will be willing to buy your work, and so that you can make money. Advice on good writing style should never be taken on absolute terms. They should always be taken on relative terms, because they are advice that works currently for a specific language demographic. If you choose to write your book in Standard Written Chinese, then you likely have to follow the writing conventions that modern Chinese readers (more likely to be first-language speakers than second-language speakers, whereas English is the only language in the world with more second-language speakers than first-language speakers) are accustomed to.

It is possible to invent your own adverbs, like so:

And so, the little horse clippity-cloppity went up the road.

But, you may lose your readers that way, because your readers will probably wonder why you insert a made-up word in the sentence. You can just remove that word, and the sentence will read fine. When you are reading your work, assume the role of the modern reader. Will the modern reader feel comfortable with adjectives and adverbs? If the reader is getting slowed down by the adjectives and adverbs, then it's time to revise! That's why it's important to have close friends to proofread your work for simple typographical errors as well as stylistic choices.

Not the answer you're looking for? Browse other questions tagged creative-writing style grammar or ask your own question.

22
What's with all the hate on adjectives and adverbs?
4
Is replacing "this" with "a" allowed in fiction?
0
Are using adverbs in dialogue/action tags a sign of bad writing?
2
I have another question about adverbs. Can you check my instincts?
6
Are -lich adjectives and adverbs critiqued in German fiction?
6
How do you use adverbs properly in fiction writing?
15
Is there any difference between these two sentences? (Adverbs)
3
Replacing a historical figure with a fictional one