Usually a story will have a narrative arc of increasing suspense: obstacles become more and more difficult to overcome, setbacks more painful, complications more confusing, the stakes are raised higher and higher, hopes and fears become almost unbearable, until the plot culminates in a climax and the tension is released in the end. Basically, a good story has the structure of an orgasm.

Something that you read as a mastubatory aid.

And because you don't read a whole novel in one sitting, each evening's amount of reading must provide a means for the reader to achieve orgasm. Which is why innuendo alone will not suffice, and there has to be some good climaxing sex going on regularly all through the novel.

In this case, recognizing the problem -- recognizing that you want a narrative arc, that something should be intensifying beyond the scope of a single sexual encounter -- is also half the solution. Once you know you want the story to have stakes beyond "when will they have sex," all you really need to do is decide what those stakes are. And the good news is -- you can choose almost anything, and you can make work.

What's most common -- and for good reason -- is the the overall stakes themselves be sexual and/or romantic. So some narrative arcs you might see are:

These are just a few examples (and inexpert ones; I'm largely unfamiliar with erotica as a genre). But I hope they're helpful to demonstrate how a sequence of sex scenes can add up to a narrative arc. Once you've got that -- you can, fairly easily, try out your own ideas. 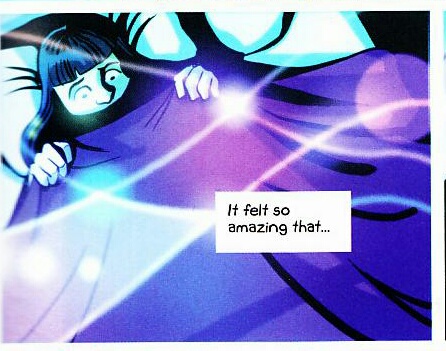 There is practically nothing you can't make work. (Although do note: putting strong emphasis on something that isn't sex, will obvioualy take some of the focus away from "just" sex. This may or may not be something you're after!)

A good erotica should not have crazy sex on page three, or at least the sex that the reader is emotionally invested in. After all, that would (figuratively and literally) be blowing your load way too freaking early.

With erotica, treat it as a set of teases and growing anticipation; establish a relationship between the sexees that's compelling, and make the reader curious about how it's all going to be consummated.

It's an erotica, of course the sex is going to happen, and there'll be several tense situations and near misses along the way. But how you do this, whether or not the inevitable sex is a good thing or a bad thing for the protagonist, all of that... well, that's what makes each erotica unique.

I don't know what kind of erotica you're thinking of which blows its load as early as page three then rinses and repeats ad infinitum. One should be interested in the main character's sexuality by page three, but there shouldn't be sex with major stakes so early. It's as absurd as having a fantasy where the adventurers confront and defeat the evil overlord on page three, and the rest of the novel just being repeat performances of magic battles with the same overlord. It'd be stupid.

And believe it or not, despite there being a thousand mass-produced Cyborg Sizzle garbage eroticas a penny on Amazon, erotica doesn't have to be stupid. Try a little harder. Approach it like an actual freaking story that just happens to place its stakes in sexuality.

Edit: In response to your edits and changed definition, I'll summarise thus; if you're writing a masturbatory aide and nothing more, then you don't need an arc. Write your crazy sex page and repeat ad nauseum. You'll have market among those who seek literary masturbatory aides, and trust me, that market exists, but you won't make much money per copy sold (Cyborg Sizzle, for example, costs $0.00 per copy on Amazon).

I can hardly say you're being a modern-day Icarus, and your waxy wings shall most certainly not melt from ambition, but if your aim is truly to write a masturbatory aide, just write one. It doesn't need an arc or even compelling characters. Just copy-paste a Cyborg Sizzle book and change the names and you'll have technically succeeded. Even Fifty Shades of Grey was more ambitious than this.

I'll take a different tack on this. Read My Answer here that goes into the Three Act Structure in some detail.

In the 3AS, we introduce the MC and show her in her normal world, solving normal every day problems. At about 1/8 of the way through the story, there is an "inciting incident" that, by 1/4 of the way through they story, develops into a big enough problem that the MC must leave her normal world (the status quo won't work anymore) and embark on a mission to solve the problem. You can read the rest of the structure at the link.

What you need to do is write a good story, that keeps the reader wanting to read what happens next to the MC, a story in which the reader likes the MC and wants her to succeed, a story in which the MC is being denied what she wants or needs but keeps trying to achieve it, until the obstacles are overcome and she does. After that, in the last 5% to 10% of the story, she enters a new "stable state" that is either her old status quo, or some "new normal" for her.

That is the story arc.

I can think of many inciting incidents, from real life, that might make an MC (of either gender) become obsessed with finding sexual gratification, particularly in the modern world. I think men need less motivation in that respect than women.

For women, I knew a woman in college that truly believed she was a Wiccan, and she could cast a powerful spell during an orgasm with a new partner. A nice weekend hobby, if it isn't finals week. Or maybe especially if its finals week, I'm not sure about that. Or a breakup (especially if there was cheating involved) may cause a kind of revenge promiscuity. Or, again from RL, from a study on cheating spouses, I know OF a middle-aged woman tasked with caring for a husband severely disabled in a car accident. He was incapable of sexual activity; and after a few years of this, for her own mental health, she began (through social media) engaging in non-love sexual affairs, specifically never with the same person twice, because she had no desire to leave or divorce her husband, but felt she needed a kind of "I'm still living" break from being a constant care-giver. Other than the Wiccan, it might be hard to develop a good Three Act story from those motivations, my only point is to show such motivations exist.

So I'm not telling you what to write, that is outside the scope of this site: I'm telling you how to write. Think up all the sex acts you want to write about, and perhaps arrange them in the order of how intense you think you can make them. Use that order in your arc of increasing sexual tension.

Figure out what the ending looks like, for the MC, what would the "new normal" actually BE?

Then the increasing sexual tension comes from the normally increasing tension of any good story. In the first half of Act I, we see your MC engage in explicit sex, but the least of intensities for your scenes. An inciting incident (catalyst incident) occurs, and we have another sex scene in the 2nd half of Act I, that one causes the MC to leave her "normal" world and start her quest for ever more intense orgasms or whatever. But she IS seeking something that she believes is out there and she is NOT finding it.

You have to keep the reader wanting to know what happens next, not just in terms of sex, but in terms of whether the MC is going to succeed.

Write a STORY in which the MC is seeking to find something or accomplish something or learn something or solve a mystery with sex. Make that difficult for her, even if she does orgasm, she doesn't find what she was looking for (until the literary climax). But after the first half of the book, she should probably get closer and closer to it.

"Dangerous Liasons" (1988) and the modern remake "Cruel Intentions" (1999) show example of how it is done. The beginning is stronger in Cruel Intentions, where the main character basically just had sex (off-screen).

The trick in both of them is that they make a difference between the sexual climax and the plot climax. Both have (essentially the same) story where sex is a part of the story, but not the main story point or tension. Both stories can't be told without sex and there is quite a bit of sexual tension, but there is also the tension of conspiracies, betrayl, and all the rest of a regular story. The beauty is in how they are mixed and interact.