Why using the "It Was All Just a Dream" Trope?

There is a particular trope that became quite infamous across many media: the "it was just a dream" revelation, where, usually at the end of a important story arc, everything turns back to the start since nothing actually happened in the real world and the story narrated in said arc is thus erased. It may have consequences on the dreamer psyche, of course, but the fictional world is not changed by the story.

It is my understanding that this trope is perceived as "cheap" in many cases. It's so infamous that it's used as an inside joke sometimes; "yea, they all die in chapter 6, and then they wake up in chapter 7". Yet, I see that this trope is a still used narrative device and I'm wondering why.

So, my question is: What are some good reasons to use the "It was just a dream trope"? What are some situations were it can be used effectively?

I'm struggling to understand why would an author want to use that. I suppose it can be useful to write yourself out of a corner, but it seems an huge waste negating a good part of a story this way. Also it's my opinion that the dream-trope utterly shatters the reader trust and suspension of disbelief. So, again, when is it worth to risk it?

"It Was All Just a Dream" [IWAJAD] is useful for "character" stories; Dorothy undergoes a large transformation in the Wizard of Oz, from being a little girl to being at first an unintentional hero (she is denying she is a hero) to finally being a true, brave and intentional hero by the end of the tale, in the service of saving her friends. The WOZ is very similar to a coming-of-age story, without puberty being involved; it is a "becoming an adult" story.

In a few TV series we see vignettes of IWAJAD, a few minutes of some disaster occurring and then the character wakes up from a nightmare, hyper-ventilating and hyper-agitated. This is to show their internal fears of their precarious situation in life.

Often, it can be foreshadowing as well; the dream can be some twisted version of what is about to happen. If you don't want to be supernatural, you can still use it, like the princess intuits the prince she is about to marry is a monster, and has nightmares about this, that seem real.

But the primary use of IWAJAD is when, actually, as an author, you don't want anything BUT the character to change. That is the only transformation you want to show, whether the "dream" is most of the story, or just an interlude within a story; you want the dreamer to go forward with a personality change, often this is the reason she takes actions (like acquiring and hiding a weapon) that will be very relevant in the plot to come.

If you sense a rise in IWAJAD stories, perhaps a change is coming in taste for stories, that people are becoming more interested in pure character-transformation stories instead of adventure, Hero's Journey, Saving the World, Sword and Sorcery, Sci Fi, or other stories less focused on character, morality, and emotional struggle.

I don't know if a change is coming; but the market does cycle. There are fads in what readers want (and thus what publishers and agents want); the shifts are typically driven by new bestsellers or a few that by chance are in the same vein.

One defend-able use of the "It was all a dream" trope involved sleepwalking.

I forget the medium where I encountered it, but I remember a story in which the point of view character wakes in an outdoor setting to find that his camp was covered in fog. He gets up and steps away from the campfire to answer a call to nature but soon finds himself in an abandoned graveyard. This leads to an open mausoleum containing an open coffin, and ultimately a sleeping vampire. In short order, he has created a stake from a convenient piece of wood, placed it above the vampire's heart and is about to pound it home.

This is when he wakes up and finds himself kneeling over one of his sleeping teammates, holding a pointed piece of firewood in place, along with a big rock to serve as a hammer. This is also when the teammate wakes up...

In this case, the much maligned trope is used to destroy one of the supporting character's trust for the lead character. The scene damages the unity of the entire team, which becomes a valuable plot device for the rest of the story. I remember that it was a very short application of the trope but I also remember that even in its' brevity, it came at a price. From that point forward, the entire story took on the feel of a vampire story (which really didn't fit). Also, decades later, all I can remember of the story was its creative use of the dreaming trope. That's a sad fate for what was probably a pretty good piece of writing.

The bad reputation of this plot device comes from the fact that it can be used as a lazy, catch-all solution for writers who have written themselves into a box they can't get out of. It was perhaps most infamously used on the prime-time soap opera Dallas, when a year-long mystery about the murder of the main character was "solved" this way. People don't like it because they feel cheated into having cared about things that were unreal and inconsequential.

There are a few reasons it is still used. First, it's useful. It can be a way to reveal important info, show some of a character's inner life, illuminate relationships or cover meaningful psychological ground. Second, it can be a way to do genre changes --you can have fantasy within a realistic setting, or a thriller inside a comedy. In particular, back when people were less comfortable with fantasy as a mainstream genre, dreams were often used as an excuse to indulge. Third, it does (ironically!) reflect real life. We all dream, whether or not we remember those dreams, and many people at least occasionally have dreams that are long, vivid, realistic and/or psychologically rich.

The best advice for dream sequences is to make them worth the time for the reader. One way is to make them a complete sequence, like in The Wizard of Oz movie, where Dorothy has to complete her quest before she goes home. Another is to provide valid facts or psychological insight in them. They are also less likely to inspire rage in readers if it is made clear they are dreams, rather than serving as cheap "gotchas!"

One example I have uses this trope for the benefit of the creative team. In the TV show Married with Children, the lead actor was pregnant. I've seen all sorts of ways TV has dealt with pregnant actors, ranging from adding a child to the show (I Love Lucy), completely ignoring it and pretending no one can tell (Will and Grace), or minimizing the use of the actor while also hiding her belly when she was onstage (The Cosby Show).

In this case, the writers made the character pregnant as well. It's unclear to me what the original plans were. Since adding an infant to the cast may not have been something they wanted to do, it's possible the trope was planned all along. But what happened is there were multiple episodes showcasing the actor's pregnant state then the actor herself suffered a stillbirth. They had a couple more episodes with only her voice from offstage, then revealed that her pregnancy had been her husband's nightmare. Whether it was the original plan or not, this outcome seemed the kindest of possible choices.

Another example, with a completely different reason, was the show Roseanne (the original series). In the final season, Roseanne's husband has a heart attack and, as he recovers, the family wins the lottery and becomes super rich. They had several absurd episodes with the family enjoying their newfound wealth. Then they revealed that the husband had actually died from the heart attack and the lottery bit was Roseanne's dream as she coped (by imagining her husband alive and free from stress).

Did these examples work? For the first one, I'd say yes. The show itself was meant to be absurd and unrealistic and incorporating a semi-realistic nightmare fit in pretty well. For the second one, no. I used to love the show but I stopped watching during the lottery episodes (they were so over the top and this was a working-class realistic show) and didn't even see the finale, just heard about it. While I understand the dream portion, it failed in the execution (mostly how long it went on).

Here's 2 examples of using a nightmare (the same nightmare) to show-not-tell a character's fear/obsession as the primary motivation for their in-story actions. 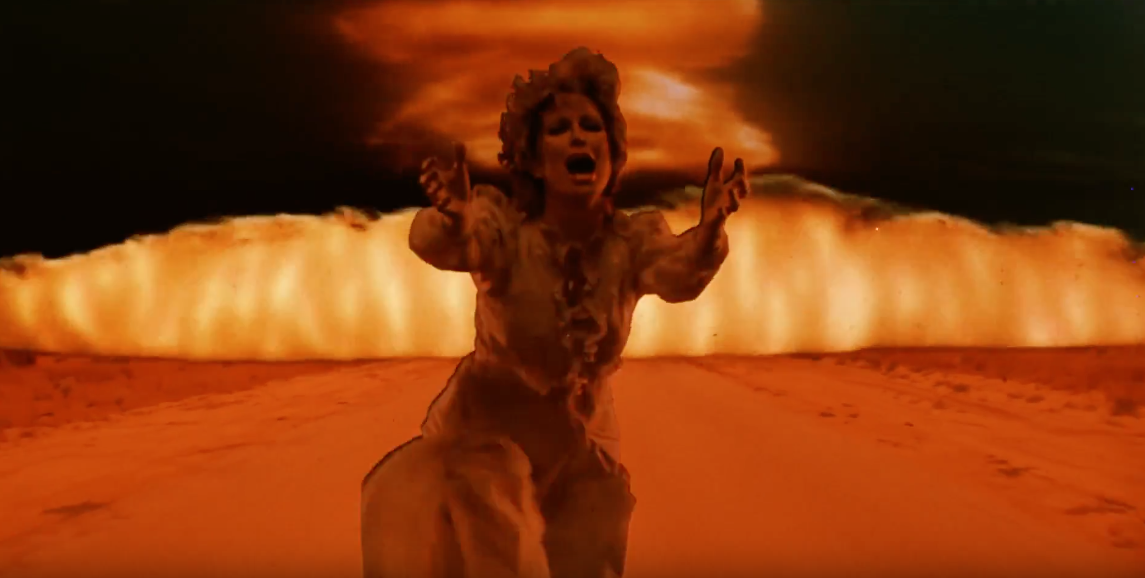 It's obvious from the context of the stories that the nuclear holocaust dreams are not real (the story would end but the films aren't even halfway through their running time). The goal is not to fool the viewer and then reverse it. They are intended to show the character's idea of the worst case scenario: what they fear will happen if they fail.

It's debatable whether these dream-sequences are successful narrative devices. They are handled clumsily with heavy portent, the special effects are unconvincing, and the "victims" are not even characters within the story. In Dreamscape it is the US President's wife who is never mentioned in the script. In Terminator 2 the victims are other people's children and the MC dressed up in a waitress uniform she wore for all of 5 minutes in the first movie when she didn't have any children of her own. Perhaps the little boy is the brat that put ice cream in her pocket, but it certainly isn't her son John Connor who is a major character in the film.

They serve more as a spectacle of death and disaster in what are essentially long plots about being chased by a monster. In both films the monster is a real and immediate threat, while dying in a nuclear strike is never a possibility. There is an enormous mis-match of scale between the characters' motivating nightmare and the actual stakes within the story.

40
Avoiding the "as you know" trope in exposition
0
Adding a character from present-day Earth to a fantasy/scifi setting
4
What's the name of the trope that means fae can't cross over unless a human crosses over first?
86
Using real words from a foreign culture feels like 'Calling a rabbit a "smeerp"'
64
Is the "hero guy saves girl" trope misogynistic?
41
Avoiding the "not like other girls" trope?
16
Subverting the emotional woman and stoic man trope
16
Is it okay to use "It was all just a virtual world / dream" for a plot twist?
3
The "dead all along" trope
8
How to avoid overdoing deconstructive tendencies in writing?