Do I need less exposition if I'm going to add images?

So, I'm trying to write something called a light novel, which is a Japanese-type of writing. It's a novel, but spaced throughout different chapters, there are manga-style images, as well as full-color pieces at the beginning of the book, often detailing the characters.

My question is, if I have these images in place, can I leave out details that the images would illustrate?

This answer is about light novels, which are short novels punctuated with occasional full page illustrations. They are different from graphic novels and manga because they are mostly text.

There will be exceptions for individual images but in general the illustrations in light novels show the characters as archetypes, with a well-understood vocabulary of visual tropes. They are the novel's version of "melodrama", an additional media element that helps to re-enforce the scene's emotional tone, and the reader's feelings about the character.

To do this, they can't distract from the flow of the story. They are intended to be absorbed all at once and with strong emotional impact, so they have similarities with film posters and manga "key shots". Characters are typically in stylized environments, or against simple backgrounds, while the art-style itself starts to look simplified as line art. 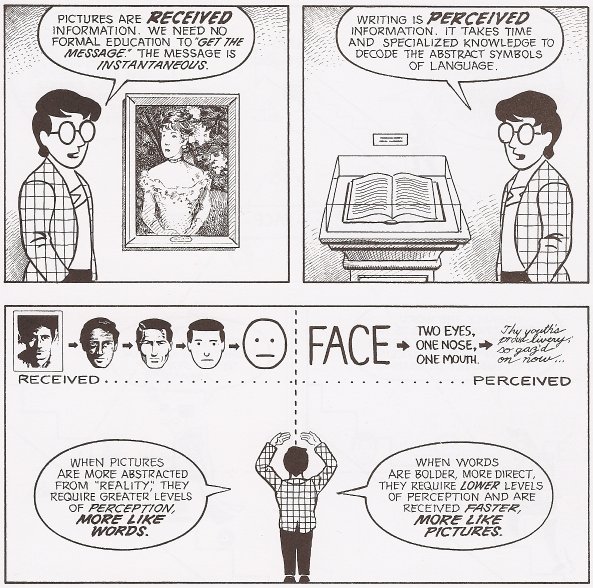 The artwork in typical light novels can be placed on McCloud's face "spectrum" just left of center, where images become more symbolic rather than representational. In the book he explains, as the face becomes more abstracted (more cartoonish) the character becomes more universal. The artwork becomes easier for the reader to self-identify with, and project emotions onto. They also don't interfere with the reader's ad hoc mental picture of the characters.

You are not meant to be dazzled or surprised or distracted. Characters are under-detailed so the reader can project emotional states onto them (rather than see them depicted as photorealistic concrete individuals). When the images become too representational or cerebral they loose their ability to deliver emotions at a "gut punch" level.

Since the images are there to re-enforce an emotional state, they tend to be very obvious about how the situation is framed, or the character is intended to be perceived. Like the music in melodrama these emotional tones don't have a lot of freedom to express something unique. They are applied in broad familiar strokes and in agreement with the scene. Hitting the wrong "note" can feel more jarring than inventive.

You can deliberately make the exception, and create an "art piece" that exists across 2 mediums at once, while never being complete in either. The artwork could tell a counter-story with embedded clues, or provide worldbuilding and texture. A fantasy map is basically an info-dump, and no one minds because it is usually simplified and they can explore it as they wish. This is all a kind of co-exposition to the story, but it doesn't automatically make the writing "simpler" and that's not what the illustrations in light novels are for.

My experience is based more on novels with some illustrations but not intended to replace text. Such tend to add a dimension of enjoyment to the read without replacing description.

Some people take in information in different ways, so exposition might cover the less visual among the readership.

Some of the more obviously redundant could be removed, but be careful as people do acquire information and register it differently.

One aspect to remember is that what appears in both text and image tends to gain emphasis in the mind of the reader. One does not wish, as wetcircuit says, distract from the story itself, but one should add dimension to it.

If you've ever read Green Eggs and Ham... Recall, there is NO description - only dialogue. There's enough allusion to the illustrations to keep the attention between the pictures and words synched. ("Would you like them in a house? Would you like them with a mouse?") All of the absurd action and catastrophe of the story, plus the tension as Not-Sam hesitates over sampling the proffered food... All of it is told in pictures.

Any amount of description CAN be shunted into the illustrations. Whether the specific illustrations are clear enough (and well enough correlated to the text) to carry that weight is another question.

1
Is it alright for a English YA novel to have anime illustration?

1
Do characters sound too similar if they use the same words/expressions?
1
Craft group exercises or chapters in critique groups?
6
What makes a bestseller - Writing or Setting?
5
Writing Montage in Novels
2
Should I make my prologue chapter 1?
16
How can I hide a second narrative within my story? (using time travel)
15
I'm afraid that my setups will be overlooked
3
Could the cast of my book be more unique?
3
Where best to insert images using Scrivener for ebook/kindle etc
8
How to portray a character with gender dysphoria?