How do you make a scene "tasteful"?

Let's say you have a scene that contains nudity. There are many ways to do it wrong and have it just be a pervy scene, but there are also ways to make it "tasteful" in a way where it's slightly less awkward to accidentally watch it with your parents. Now I don't really know how to define the word tasteful in this context, but one of the examples of tasteful nude scenes I've heard would be the one from Titanic.

So... what makes a scene like that tasteful as opposed to just... fan service, I guess? What steps should you take to avoid making it distasteful?

Speaking purely to nudity, without sex, implied or otherwise, the less attention the characters pay to their clothing, or lack thereof, the more tasteful scenes tend to be. For example Red Planet Carrie-Anne Moss's character gets out of the shower and asks Val Kilmer to pass her a towel the audience don't actually see much of her naked but Kilmer's character does, and makes it a big deal, the scene comes off as tawdry, on the other hand in Supernova everyone is stripping down and the audience sees a lot of skin, but because none of the characters pay any attention to it the scene comes off as part of working life for them, shrug and move on.

Nudity can be implied: a dress hitting the floor or a woman shown topless from the back. (Those are TV Tropes links, you've been warned.) If a character walks in on another undressed character (or two), camera might focus on his embarrassment, rather than on whoever is naked. Or the camera might pan away from a nude character or couple: show faces, hands, the rain outside the window, cut to when they're getting dressed again...

But those are visual elements. I'd say part of the "tastefulness" comes from how the scene is framed within the story. 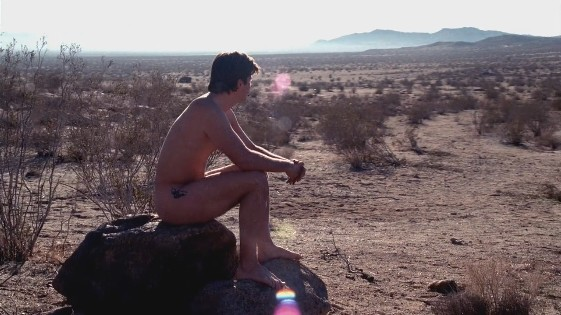 This image is from a Firefly episode: the MC has been robbed of everything, and stranded in a desert. The scene is framed as being a comical episode. We don't get to see "naughty bits", but it's not just that - the story never frames the situation as particularly sexy. Only a little. Notably, as @Ash points out, the MC pays no attention to his lack of clothes, continuing to act normally, and his crewmembers act normal as well. His Romantic Interest is seen actively not looking.

What makes a scene not tasteful is excessive focus on gratuitous titillation and sex. It can be a long scene of darkness and sex-sounds. It can be shots that focus on anatomy, and characters touching said anatomy, even if the anatomy is covered. It can be nudity put out for display.

I think the nude scene in Titanic is 'tasteful' because of the motivations of the two characters. Sure, they are attracted to each other, but Rose at her heart is rebelling against her mother and her fiancé--and we all agree that that man is horrid. Jack has been established as a good man. He's an artist. He has drawn nudes before, and his goal is art and form (I believe he expresses this, talks about the french prostitute's hands). He blushes when Rose is nude. It becomes OK for her to be nude, because he is suddenly very conscious of the intimacy.

So, there is a lot of work ahead of time to establish that these characters' motivations are other than get naked and get some action. And when she is nude, there is a decent response from each of them to acknowledge the tenderness of the moment. This is like finding the camera angles, but in words.

I don't know that you can ever watch a nude scene with parents or children and not find it awkward, but I think if you are looking for tasteful then the answer is fairly straightforward. Make the scene not about nudity, but about something else, and have the characters acknowledge through reaction, words, choices, that this is a tender and intimate moment.

This is going to be up to the director, but I think you basically don't show anything that can't be seen in a tiny string bikini. So there is a strong suggestion of nudity (because there are no strings or bikini) by the setting and pose, but no frames showing nipples or genitals or pubic hair.

Note the actor (male or female) may be nude while filming; or wearing stick on coverings; and this discreteness is accomplished by the director setting poses and then in editing judiciously cutting frames (or switching cameras, or ending scenes) when the prohibited body parts (or the coverings) appear.

In Titanic a nipple is shown, briefly (20 sec?), a naked butt, and there is a drawing of full frontal nudity, not the real thing. It gets a PG-13 rating because the nudity is brief and is not part of a sex scene; despite sexual tension in the scene, it was an art scene (the girl was posing for a drawing). (However, some believe that rating was allowed due to the stature of the director (James Cameron) and the budget of the film.)

Intercourse and orgasm are implied with zero nudity, by having it occur in a car with steamy windows; basically any kind of body concealment will suffice (a blanket, shower curtain, soapy water, or just something in the way of seeing the prohibited body part, like an arm or furniture). This is a reason many sex scenes are filmed with the actors under covers (unrealistic in my experience), or are "spontaneous" in full clothing, it is easy to conceal intercourse under a skirt (and to simulate it).

Not the answer you're looking for? Browse other questions tagged creative-writing screenwriting or ask your own question.

3
Rapid Cross-Scene Cuts in Screenplay/Script
1
Scene descriptons?
2
How do you contact Hollywood directors?
1
How do you format a screenplay?
1
How can I continue one scene after many scenes?
2
How many blank lines before scene headings (and secondary scene headings) using Amazon Storywriter
0
How to write a Scene Heading for on the way somewhere
3
How do you write "NOOOOOOOOOOOOOOOO!!!!!!!!!!" in a movie script professionally?
0
How do you realistically create a breakup/betrayal scene?