How to have a character make a drastic character change in a short amount of time (i.e. the first quarter of the book)? [closed]

Want to improve this question? Update the question so it focuses on one problem only by editing this post.

I have a main character who starts off as a jerk, but quickly becomes kinder as the story. I plan to have him change drastically in a few chapters. But how do I do that without making it look too weird/crazy? I was thinking about citing grief as a reason for his initial coldness.

This is different from other questions because the change happens quickly (within the first quarter of the book) rather than later.

Grief might be a better explanation for a positive change than a reason for being a jerk. What you seem to describe is grief induced numbness, the temporary inability to feel as you are already feeling so much.

Such a rapid change does seem drastic. I know someone who is a jerk and thinks himself very much the opposite, but only listens to certain people. If one of those people proved to him his failure of his own standards, he might change slowly.

Changes in attitude must have a very good reason and ought not be like flipping a switch. The realization that others see you as x when you think yourself y would be sobering and begin a change. Let it happen naturally, not like ‘he bought a puppy, now he is nice’.

Is this your first draft? Most well-written characters have a degree of depth to them, and readers are kept engaged by, among other things, being surprised, internal conflict, and seeing multiple motivators at once.

Imagine a jerk who wants to be a jerk. That character might behave as follows:

The man shoved the utensil drawer shut. If his son needed the car key, he could bloody well find it himself. Grow up, twat, he thought. "I haven't seen it."

This is a one dimensional jerk. Writing something so black-and-white might be a good way to get thoughts on paper. But as you redraft, I suggest that you try to add nuance and depth. Try to shape this sort of interaction into different directions.

His son limped in behind him, still hung over at three in the afternoon. "Dad, come on, I need the spare key. Where is it?"

The man shoved the utensil drawer shut. The last thing his son needed was to be driving in that state, seeing those same no-good losers that messed him up the night before. "I haven't seen it."

This is less jerk-y. Keep playing, and add depth and inner conflict to the dad.

His son limped in behind him, still hung over at three in the afternoon. "Dad, come on, you said I could have the car."

His son was right, he had promised.

"You need a knock upside the head." He squinted at the edge that had crept into his voice as he shoved the utensil drawer shut.

There was no help to it, to his anger. His boy had gotten all the bad genes. Tough love.

"No, you listen, and you listen hard. The last thing you need is to hang with those no-good losers." The edge to his voice had hardened, he heard his own father in it, the coldness he'd grown up with. It wasn't what he wanted, to sound like his father, the man had been a heartless jerk. He wanted to raise his son better, give him freedom, support, help him find his dreams. He kept falling short. "I have no bloody idea where the key is."

Keep playing. If you add more complexity to the early scenes, you have room to nudge the character to where you want it later.

Answer: You need to add layers and depth to your characters; motivation and complexity. Then accentuate the 'jerk' factor earlier and the 'good' factor later.

(Also, for what it may be worth, using grief as a rationale for 'jerk' early is a bit of a cliche, and please (if by any chance you are thinking to do so,) don't use 'true love with amazing woman' later as his redemption to goodness. Your character deserves his own internal life, at least somewhat independent of these sorts of external factors.)

Rapid change is typically induced by events that cannot be managed with a smooth transition. The mathematics of catastrophe theory provides some nice graphical thought-jumpers, e.g. in https://tonymusings.blogspot.com/2018/05/catastrophe-surfaces.html you will find this graph: 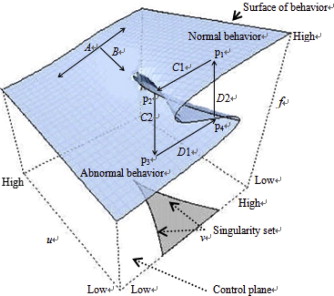 So what you need is a turning point event where the character has to change, typically something he realizes after trying (and failing) with his usual methids.

Change, especially rapid change, happens as the result of pressure. You need to let the reader know about this pressure. Not necessarily in detail, but enough that the change in your character becomes believable.

There are further two basic variants to use.

First, character can be jerk because something dramatic happened and in his sorrow he pushes people away and he then rapidly reverts to his original personality when he learns to deal with his sorrow and "grows up". Typically thru character interactions, so this is very common in romance.

Second, the character is a jerk and something happens that forces him to stop. For sorrow the classic example in pop-culture is Spider-Man/Peter Parker, who acted like a jerk and it resulted in his deeply beloved uncle being killed. After this he simply refused to act like that anymore and went to extreme lengths to prove to himself he has changed and the death of his uncle means something. This is also very common pattern.

The second option is easier if you want it fast and do not want to write romance (although any kind of intense or extensive social interaction works, not just romance). Downside is that the speed comes from you having to justify the change for the rest of the characters life. He refuses to be a jerk. He chooses to be kind. For everyday of the rest of his life. If he is a central character you must write that in. Not once. Not twice. Constantly.

Not the answer you're looking for? Browse other questions tagged characters character-development or ask your own question.

3
Does my story structure for an ensemble zombie story sound effective?
7
Character crisis for a Science Hero?
4
How to change the readers opinion of a character?
15
How do I balance immature levity and flaws and character growth?
8
How best to describe multiple alien species in a short amount of time?
5
Character development. Do I need major events for changes or can it be more gradual
2
I developed this character in the second book instead of the first
5
How do you convey that two characters have a crush on each other?
0
How do you realistically create a breakup/betrayal scene?