Does a story require a villain to succeed?

So far in my WIP, which is a “journey” story, the main characters have been struggling against the environment and the fact that they’re displaced and trying to return home. I’ve arrived at a point in the plot where they’re settling in to their situation and I’ve stalled out. I couldn’t figure out why. Now I realize that they don’t have something clear to struggle against. I know what I want them to accomplish over the course of the novel, but I don’t know what, besides a core time travel mechanism in the story, they need to “fight”. I feel like I need some way to create conflict for them (maybe not), but I don’t quite know how. One MC is going to go through a deep bout of depression, and the other will pull him out, but that’s not long-term sustainable. Do I need to have a personified villain? This conversation suggests that I don’t. What non-personified (e.g. environment, time pressure, etc.) are examples of things where I could find inspiration for my story?

This idea is different than every scene needing a villain. A villain is usually an antagonist, but heroes (or neutral factors) can also antagonize a protagonist in scenes. Some great stories and scenes turn villains into co-protagonists (maybe Severus Snape falls into this category; clearly an antagonist through much of the story, and possibly a brother-in-arms by the end.)

There is a school of thought that each story is at its heart a choice between what your protagonist wants and what your protagonist needs. The entire story is this: Your hero weighing the choice, finding the decision and sacrificing one or the other to reach what she has decided. Conflict is implicit in this.

So, yeah, there should be antagonism = an antagonist, and this can be a 'person.'

A villain is simply a useful way to put this choice into relief. A personified villain makes it easy to frame the story. There are a thousand examples of this kind of story.

But your antagonist can be an evil corporation, a governmental group, the environment, space aliens, a plague, a drug cartel, one's own demons, religion, the past, the future--anything your protagonist is working against becomes the antagonist. If it is thematically woven through and lies at the crux of your protagonist's choice, it could be thought of as the villain.

It sounds like your antagonist is either time, or depression, or an internal struggle about whether they should go back or not.

You can personify any threat you wish. If you want to. What this does is make it easier for the reader to see the signposts in your story. It's like a trail with obvious markers.

Traditionally, people have referred to four different types of conflict that can animate a narrative. 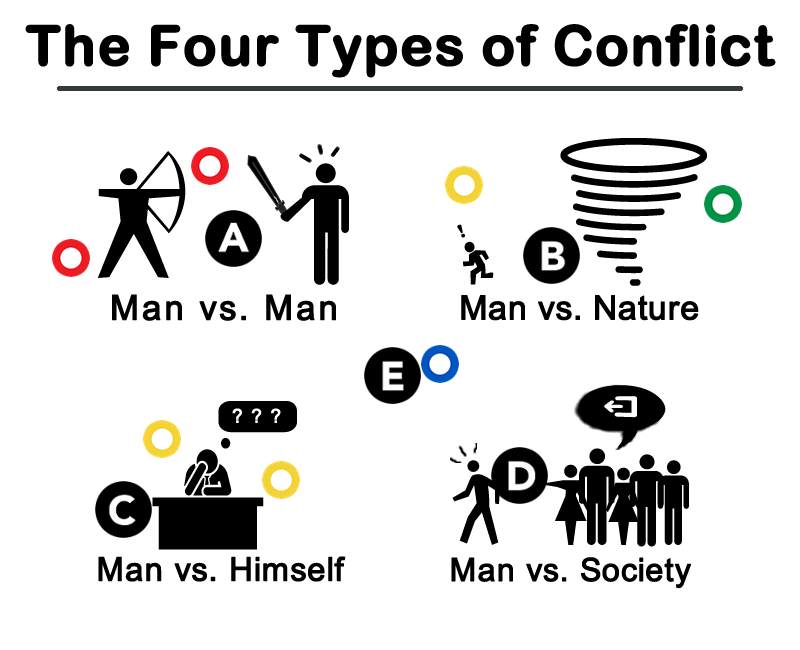 Sexist language aside, these classifications can be quite helpful:

But ultimately, something needs to keep the narrative from just being a smooth progression from start to finish. It's possible to be quite creative with this, however, and one story can quite often have multiple types of conflict. For example, in my current WIP, the protagonist thinks he has antagonists, but really, his main enemy is himself. Other stories have dealt with antagonists who become friends, or at least allies, when facing off against society or nature.

No, a story does not need a villain.

All the story requires (to be interesting) is a person trying to do something that they do not find easy, so they have setbacks, make mistakes, or have to sacrifice to make something happen.

In writing, it can be easier to do this if another person is opposed, because the plausibility of difficulty is not questioned; this other guy is shooting at them (figuratively or literally).

But look at the movie "Juno" for example; a teen girl gets pregnant and has to decide what to do. There are no villains, her parents are supportive, she has to tell the father (her friend), decide whether to get an abortion or have the child, then whether to keep the child or put it up for adoption, then choose an adoptive parent. No person harshly opposed her at any time (though opinions were expressed about abortion).

In Castaway, Tom Hanks is stranded by accident on a deserted island, and must figure out how to get home. Again, no villains. Consequences of being gone and presumed dead for years, but nobody trying to thwart him.

You have a perfectly good story with a crew against the elements, but it sounds to me like you have let them solve too many problems by "settling in" to their situation. In this type of story, they cannot settle until they have everything they want, or know they are permanently denied what they want; and there the story ends.

You need to find that wrong turn. Kick that environment into a higher gear of opposition, with dangerous predators, heat, cold, starvation, illness, hurricanes, earthquakes, vipers, whatever. This doesn't get easier, every skill they gain for survival gets offset by nature throwing another bucket load of crap on them, trying a fun new way to kill them.

Or they come to an impasse, a bridge is out, or there is no bridge but the river is too fast, and they have to backtrack or find a way around it. Through the forest! Great idea! Then lightning sets the damn forest on fire, and they run. They tie themselves together and have to jump into that fast river and try to not drown as it sweeps them fifty miles off course. And over the frikkin' falls. It might have been a little easier if Joe knew how to swim.

Not the answer you're looking for? Browse other questions tagged plot conflict or ask your own question.

63
How to write a story without conflict, like "My Neighbour Totoro"?
4
Hang on - where's the main conflict?
3
Does a novel require a conflict?

6
Why does the villain always win right before the hero defeats him?
4
Hang on - where's the main conflict?
2
How does External Conflict set up the Climax?
3
How does (or should) an inner conflict span a series of novels?
63
How to write a story without conflict, like "My Neighbour Totoro"?
1
Vignette-esque story structure?
15
How do I balance immature levity and flaws and character growth?
1
What is the best way to plan a series?