Should I avoid sex scenes / nudity in my horror game (or in general)?

As the title might suggest, I'm working on a horror video game, which happens to have a few sex scenes and a bit of nudity here and there - at least, that's what I planned to do. Just FYI: I don't actually plan on selling it anywhere, I plan on making it freely available and self-published. I don't care about getting a rating, but I do care that nobody underage even sees the game. And no, I would probably not even publish it on Steam, even if they recently opened the floodgates for games with sexual content, but that can always change.

So what's the problem exactly? It's a horror game after all, pretty much already reserved for adults only, so why should anybody care if it has sex scenes and nudity, especially when it's not even going to be rated? Well, imo, people have this weird double standard where they can see extreme amounts of gore, but not anything related to sex. Maybe I'm wrong and it's just simply how games with sexual content have been shunned in the past, but that's how it comes across and it's why I'm unsure of doing anything in that direction. Doesn't help that video games are still "babied" unlike movies and books.

What would the game have? Full nudity and full sex scenes, meaning you get to see everything, penetration itself included. If you want. The sex scenes are basically just fan service that you can skip at any time, since they don't really add much to the story itself. You can choose to either watch two (or more) characters have sex for half an hour or you can just get a "and then they had sex" text box and move on. Your choice. The only sex scenes you can't skip are the short ones, where something important happens in the middle of it.

At the risk of being called a pedophile, I also planned on including one nude scene involving two 12 year olds. Don't worry, they're not at all supposed to be sexual in nature, they're just supposed to be treated like a "matter-of-fact" manner. No weird camera angles, no focus on the naughty bits, no sexualisation whatsoever, they just simply happen to be nude in a setting where people are usually nude. Nothing more.

Besides the perverted parts of the game, the game is already pretty graphic, one scene for example involves a character finding the heads of her parents. It is by no means meant for children or even young teenagers, it is adults only.

So... should I go with it? Or should I leave these things out entirely because gamers would prefer not to have them (for some reason)? Should I maybe make two versions, one cut, the other uncut, even if it would still contain the gore? Would it be distracting to have these scenes in a game that's primarily horror and not... erotica/porn/whatever you want to call it?

If the sex scene is relevant to the story, but you're not sure how graphic it should be, offering a toned down option in the game settings is a good idea. There is an audience for scenes that leave less to the imagination, as evidenced by numerous mods. There is also an audience for the less explicit version. However, here's one more thing for you to consider: as a player, I wouldn't want a 15-minutes anything scene. I'm a player, I want to play. If I have 30 minutes to play, I don't want to suddenly spend half of my playtime watching a scene. 1-2 minutes - great. Anything longer, and I'm going to lose patience, get myself a coffee, open a book, all while I wait for the stage where I get to finally do stuff. Videogames are an interactive medium. A long cutscene takes away this interactivity aspect.

Finally, regarding naked 12-year-old girls, I'm sure you're familiar with the "Napalm Girl" photograph from the Vietnam War: 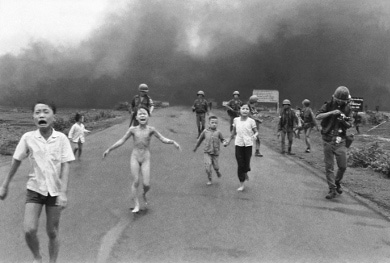 I'm sure nobody would call this picture "sexualised" or anything similar. I'm not sure what you're planning, but I wouldn't start shouting "paedophile" without having seen first. That said, @Amadeus is not wrong - the other scenes in the game might colour how the scene with the girls is perceived. It might not be sexualised in itself, but perceived as such because of scenes before and after.

You need to ask a lawyer. I am not a lawyer, but it is my understanding that in some States (of the USA) it is illegal to portray, even in simulation, animation or cartoon form, sexualized scenes of children, and nudity counts, and your game would probably be considered "sexualized" since you have other scenes with exposed genitalia and penetration.

Your best bet, whether rated for not, is to include a disclaimer on the front that must be acknowledged; e.g. "This game contains extreme violence, full frontal nudity and explicit sexual action scenes. It is intended for adults only. Exit if you do not consent to viewing the explicit content."

I wouldn't worry about doing that, such notices (on the game and in the description of the game) can actually increase the sales (or downloads) of your game; some people will get it just to see those scenes!

But definitely, cut out the nude children. Put them in bathing suits if you need the characters. Or figure something else out. You cannot just do whatever you want here. (and I don't even know the law in other countries, do not assume they are any more liberal than the USA).

I originally had no intention of answering your question, I only looked at your question out of curiosity especially as I am in to videogames and to see why this was in 'Writing', However I read the line:

At the risk of being called a pedophile, I also planned on including one nude scene involving two 12 year olds.

and I felt like I should say something. So without further ado. You say at the end:

It is by no means meant for children or even young teenagers, it is adults only

Whenever you write anything you should be asking yourself why. Why do the children need to be 'nude'? Even if the target audience are mature adults and the scene is seem natural in your game's narative, depicting children without clothes may still not be appropriate. Do you feel you have the maturity to handle the scene tastefully (I think possibly not) and is it worth trying?

I plan on making it freely available and self-published. I don't care about getting a rating, but I do care that nobody underage even sees the game.

It sounds like you are planning on distibuting your game on a personal website or on some other site. Either way there is probably no way for you ensure that underaged children will not see your game and if it is the latter I'm pretty all sites will screen games to see whether it is something they would want to host (you might be getting ahead of yourself with regards to Steam).

Well, imo, people have this weird double standard where they can see extreme amounts of gore, but not anything related to sex.

There is no reason why you should not put sex scenes in a game, it is after just another creative medium which can be used for human expression and entertainment. I think that often people become uncomfortable when confronted with CGI sex as it feels very natural and inevitably awkward. Are videogames the right medium for your story? If the answer is yes and you want other people to play your game, the next thing you should ask yourself is: "Is this the kind of thing my audience ('gamers') will want to play?" "Will this be fun to play?"

Anyway I hope I have given you good advice for think about and good luck with however it turns out.

Not the answer you're looking for? Browse other questions tagged videogame sex or ask your own question.

4
Citing and Quoting events in Games
5
What format/platform/structure is good for writing for a video game?
7
Gameplay clashing with story?
3
How can a main character in a visual novel attract people of different personalities besides having a single trait each of them is attracted to?
6
Ways to develop characters in a fast paced video game
8
Are there certain keywords that Amazon expects one to use if one's genre fiction book contains sex scenes but doesn't really fall under erotica?
4
Many sexual situations, but no actual sex scenes?
5
How crucial is a waifu game storyline?
2
Is it silly to ask a writer to finish my script, but follow my key points