How to sort out a confusing storyline?

I started writing my novel and finished the first draft. I sent it to my dad who gave me some pointers so I started a new document to 'flesh it out' But that document has run away with me, and now I am confused about what happens where, who has died when etc. How can I get it all sorted, in order, and with everything right?

Writing a complex story with multiple storylines, I find it useful to chart things. I draw a timeline: what happens when, what age characters are at the time, which event occur simultaneously, how long it should take to travel from point A to point B. On a timeline, it's easy to see whether I've made a mistake. Once I've given a character some specific appearance, (I lean towards discovery writing, so I don't pre-plan this kind of stuff,) I make note of it in a "characters" file, so I don't introduce discrepancies later on. In short, anything that I would later need to double-check, be it worldbuilding, character description, story timeline etc., gets filed away. The software I use is OneNote, because I don't need to buy it and it's sufficiently flexible for my needs. You might find that some other software suits you better.

At the same time, there has to be a plot reason for events to occur in your story. Consider the overarching shape of your story: what are you trying to say? At its core, what is the story about? If you, the writer, do not remember what happens to whom and when, maybe things are happening too randomly, maybe the "why" and the "where" do not sufficiently matter. If that's the case, maybe you should re-examine the story, start to finish, and decide what serves it, and what is meaningless.

Finally, and this ties back to the above point about reasons, if the story is confusing to you, it will also be confusing to the reader. @MatthewDave's solution is to simplify the story. I would suggest instead ordering it. Make sure there's a cause-and-effect relationship between events, so it "makes sense" that event X happens to character Y at time Z. Logical connections make understanding and remembering easier. If you have multiple story lines, make sure the reader knows what events occur simultaneously in different places, how the plot lines relate to each other. When all story elements form one picture, it becomes less confusing - akin to a tapestry in progress, rather than a heap of tangled yarn.

It sounds as though this is your first novel. Congratulations! You have accomplished something very few people ever do.

To answer your question, consider these points.

What is the arc of your story? Is there a main character, does he or she begin with a goal, is the goal evident up front, and does he or she then drive the plot? Does every scene serve the story from the reader's perspective, or are some there for your own needs to find the story? You might be able to cut the ones that exist for you instead of the reader.

If you are not familiar with story structure I recommend googling that and spending some time learning what is meant by the major plot points in a typical novel. Inciting incident, point of no return, call to action, dark night of the soul, rededication, climax, denouement, ... these things exist in most successful stories in one form or another. It's useful to identify them in your own work.

Other parts of my answer include technical aspects of the craft. Do you have a consistent point of view? Are you using dialog tags, descriptions, setting, action, narrative appropriately and in balance?

This is likely an answer a lot of people are going to say, but if you yourself are confused by your story, as the writer, how do you expect a reader to keep up? It seems that while your story may need fleshing out in ways your dad suggested, that in terms of elements that need balancing and remembering, you're in dire need of simplifying the story.

Now I'm not saying discard characters here there and everywhere, I know from experienced that it's easier said than done, especially when it's dear to you, but if there's stuff that's confusing even the writer, it's time to dial back and make things simpler, for your sake and the reader's.

It alarms me that you've written a novel and then opened a new document to start again.

The best advice I can offer is to leave your novel for a month - don't even think about it. If you're itching to write - start a totally different story.

When a month has passed read your novel from cover to cover, take notes, then go back and fix the parts that confuse you.

Each writer develops their own technique. For example I don't write in 'drafts'. I have never written a second draft. Before writing the next chapter I re-read the previous one or two chapters. I do to myself what I want my readers to do - get drawn in the world I have created. I call it writing from inside your story. Imagine you are have a really great dream, a dream that you can get back into every night. Reading previous chapters before adding future chapter is a way of re-entering the world you have created. Using this method creates a more realistic story and avoids many common mistakes. Here comes the tangent . . .

e.g. "With tears streaming down her face, the woman at the end of the pier placed her white gold, diamond encrusted wedding ring on the guard rail before whispering 'sorry' and leaping to her death. The morning breeze carried her last word uttered with her last breath far out to sea."

The above is crap, awful.

You'll never pull the reader into the story that way. If the reader were inside the story, where were they standing to see the wedding ring and hear her words?

Whilst some may find this 'off-topic' others may understand. While you are writing a novel - that's where you live. It must be 'real' to you, an alternative life. Using this method you'll avoid confusion and mistakes. You'll be able to convince your readers: you were standing on the beach. You witnessed that woman die. You saw the whole thing.

I bought writing software called Scrivener, based on recommendations from other writers. 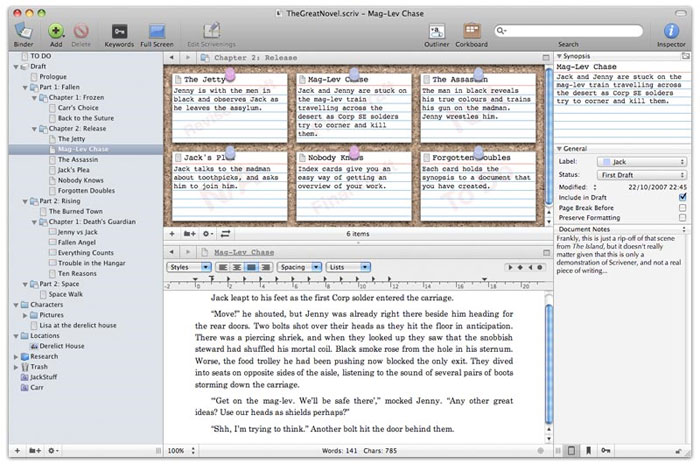 I hesitated because it looks crowded with panels. It is the opposite of all the other writing software I've bought – which generally hide the interface to give an elegant "distraction-free" writing experience (cue relaxing zen music and Apple logo).

As it turns out, I am not a "distraction-free" writer. I am the type that thrives on distraction, and is writing 20 projects at once with varying levels of focus. I had drawers filled with notebooks filled with notes, all very disorganized and very un-searchable. While I generally have 1 or 2 main projects I'm writing in-depth, I still get ideas on other half-baked ideas, stories I plan to write, a list of tutorials, research links, character histories, mindmaps, etc. The "current" info had to stay in my brain because that was the only place I could reliably retrieve it.

Eventually, I had a project that was too complicated for me to recall all the details, and I went in circles trying to find a way to map it all. Scrivener was the software that did it. It isn't soothing or zen, and it has too many utilitarian panels – I still don't know what they are all for – but what Scrivener does amazingly well is allows me to organize the entire project, research and outlines and index cards, even multiple drafts, and view all of it in multiple windows at the same time.

In practice that means I never have to close my main draft, while I re-arrange the scene order on index cards and add notes in the random order they occur to me. There are tutorials to set up formatting and the usual professional word-processor stuff, but I was eager to pour everything I could remember into one project. Scrivener is designed not just to edit the text but to edit the organizing folders, and split a page into a new document which can be dragged around in the main hierarchy list.

I now have a dozen long-term writing projects in Scrivener, from tutorials to fiction (you can have multiple projects open and drag items from project to project), I know where all my notes are (at least I know where to look). I've allowed my projects to be self-organizing, but recently found a tutorial to format Scrivener for writing comicbook panels and it had some clever tricks to use the index cards to organize dialog and exposition, so I've been using it successfully a few years but there are still things for me to learn.

I don't love the software. It is ugly and utilitarian, but using it has made me a more productive writer.

A good trick that I use is to write the events on index cards. Just a quick summary of the things that happen. Then you can visually arrange them in an order that suits. I used to stick a post-it on the wall with Chapter 1 on it and then put up the index cards in order of events in that chapter and then move on to the next chapter etc... I work best when i can physically move things around. Scrivener is a fantastic program to use. I use that and I use the index cards when I'm really lost. Just a different way to visualise things.

Not the answer you're looking for? Browse other questions tagged novel plot or ask your own question.

10
Is the first draft of a novel usually shorter than the finished work?
0
Is this too much of a coincidence?
2
Is it a good idea to make the protagonist pull themselves together
16
How to best pace information reveals to the reader
0
Should a prequel strive for symmetry with the original work?
4
Will a change in perspective “intimacy” confuse the reader?
10
I love the world and characters I've created for my story, but I dislike the plot. How can I proceed?