Exposition: Talking Animals - How do I Reveal This to the Reader?

I'm writing a book series where most of the cast are highly anthropomorphized animals (or in some cases mythological creatures). Humans still exist in this universe, but are rare (only being found in large numbers on the planet Ishgabangaloodoo). Pictured below is Weasel, the main character of the series. 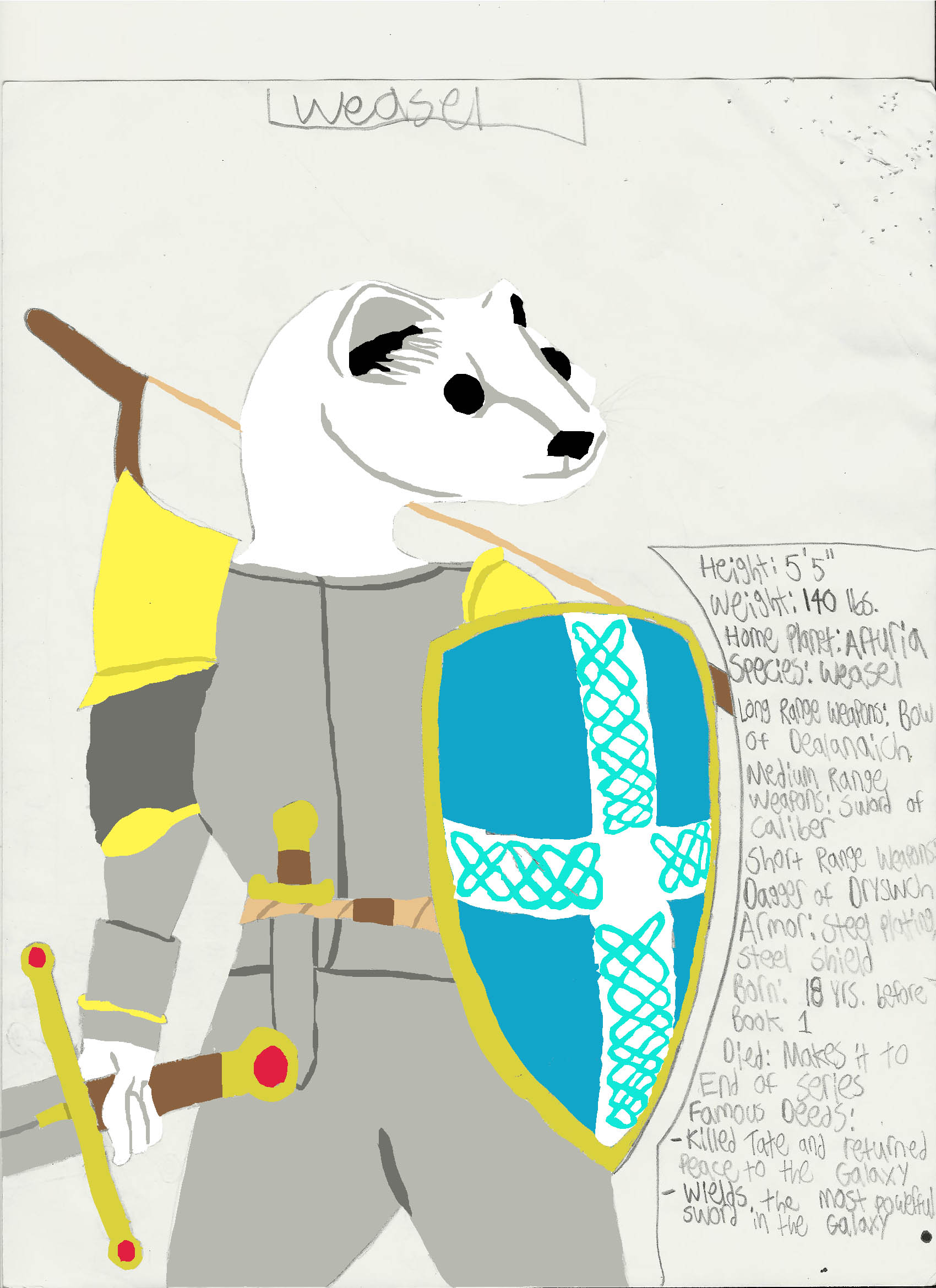 The reason for this is that long ago, soon after humans migrated to the new galaxy, the Gods grew angry with them for not worshipping enough, and the result was the Gods cursing all of humanity to turn into anthropomorphized creatures, with the exception of the loyal Atlantean Civilization (who eventually became the Ishgas but that's a story for another time). This happened thousands of years before the start of the series, so all of the talking animals (I'll just call them "sentients" from now on) at this point in time were born and raised by others like them and were never human. Since these are essentially cursed humans and not actually animals, they interact with their dumb animal counterparts the same way regular humans do. How do I explain this to the reader in a way that feels natural, since none of the characters are new to this universe (therefore the Watson trope is useless)?

To answer your question, first you would need to answer for yourself the following:

The Wind in the Willows quickly introduces the reader to the fact that animals are anthropomorphised. It starts:

The Mole had been working very hard all the morning, spring-cleaning his little home. First with brooms, then with dusters; then on ladders and steps and chairs, with a brush and a pail of whitewash; till he had dust in his throat and eyes, and splashes of whitewash all over his black fur, and an aching back and weary arms.

However, faced with this state of having both sentient and non-sentient animals, a reader is going to be confused, in a "wait, what?" kind of way. You'd do well to clear this confusion as soon as possible: make your story give the explanation you've given us above, about the gods cursing men. It could be, for example, a lesson given to a child, or a religious sermon, or some sort of commemoration festival. The story of the gods' curse needn't be full, it might have been partly misremembered by the people, but there needs to be enough of it for the readers to understand what's going on.

Alternatively, you can just tell it all in a short introduction, like @Amadeus suggests:

Long ago, soon after humans migrated to the new galaxy, the Gods grew angry with them for not worshipping enough, and the result was the Gods cursing all of humanity to turn into anthropomorphized creatures.

I'd just do it in exposition; not a lot of it.

There are two scenarios; based on your comment. Either the characters know they used to be humans, or they don't. Since our own species (homo sapiens sapiens) existed 50,000 years ago (at least) and we don't really know anything about our ancestors or what they suffered through 35,000 years ago, it is plausible the current residents don't think anything about having been humans at one time, and may not even know that they were.

In that case, I'd just introduce your Weasel as a weasel, he sees his friends and business acquaintances as whatever animals they are. Don't explain, this is just the normal world.

Most stories open on the "normal world" of the MC, and you should present that world as they experience it. He has no reaction to the store clerk being a 6' porcupine or the cop being a 4'5" hedgehog; that is the way of the world.

Now if they DO know they were once human and are now animals, then in the opening have your MC doing something that allows his mind to wander, like walking somewhere, and reflect for a sentence or two on the transformation. Perhaps he wonders what it would be like to be human, as he has heard the Atlanteans are, instead of a weasel. He wonders if it would be any different; they certainly looked colder without any fur, and more prone to injury. And he has heard they have the weakest sense of smell, he couldn't imagine going nose blind. On balance, he was happy being a weasel. Weasels were rare, it gave him a certain measure of recognition in society.

Something like that. Not straight up exposition, exposition filtered through some thought and feeling to create conflict: He is supposedly cursed but prefers his cursed state, it is all he has ever known, and changing from weasel to something else is as undesirable as us being forced to change form into some other animal.

Not the answer you're looking for? Browse other questions tagged creative-writing fantasy exposition or ask your own question.

8
How Much Exposition is Too Much Exposition
1
Too much exposition in my full-length play: how to fix it?
0
How to write a "strong" passage?
6
Preserve "The Reveal" vs lying to the reader
8
Would Amazon allow sex between transformed humans (animal/object) with normal humans
19
How to introduce alien flora/fauna without turning the fiction into a biology book?
2
How do I reveal multiple timelines to the reader?
2
Does This Geopolitical Power Balance in my Setting Make it Look Like I am Promoting Colonialism?
0
How do you format a chapter intended just for exposition?