What software/techniques do people use to gather ideas?

I'm planning to create a game. It won't be the first game I've created (or even released), but it will be my first game with any story to speak of.

I'm still very much in the planning phase of the entire thing (even earlier than that perhaps), and I often have thoughts of events that could happen, or pivotal characters that could exist, but I don't know of a good way to track them.

I know that I've already had (and subsequently forgotten) quite a few ideas.

I think the fact that it's going to be a game is irrelevant to the question really. I'm quite sure that my problem applies to any kind of story writing.

What software or techniques do people use to keep track of their fragmented ideas so that they can be found later, and drawn together as they evolve?

Many people are using a wiki when they are creating their worlds, as can be seen by this answer to the question What software is available for keeping and organising notes about your world? on WorldBuilding.SE.

The biggest one is MediaWiki (the power behind Wikipedia). MediaWiki can be private, and it's not too hard. See this tutorial for information on how to do that. But basically you would create one account and limit it to that. As a bonus MediaWiki is open source and free.

Another option would be DokuWiki on a Stick. This would be a simple home wiki that you could transport around on a USB drive, or possible share over the internet. To see set up look here. And it can still be private. DokuWiki is also open source and free!

There are many other private wiki options but many of them aren't opensource/free.

These are a few easy and free options that you can use to create documents with your ideas and link them to each other. It will be easier to keep track of if you have all your documents in a searchable wiki. And you can link to an existing page whenever you reference it.

For your specific problems:

I could probably write things down - but I fear that doing so would not scale well. I might keep jotting down paragraphs here and there - but once I've done so I may never find it again once there are a few.

It will be easy to find stuff again if it's all in one place with a title. No need to fear that you will have multiple files with each one being somewhere on your computer. Everything will be kept in one place and can be found again if you know what you are searching. You can also simply create a page of "Ideas that are not yet integrated into the story" or something like that and whenever you have a random idea you can link to it there. This will make it easy to keep track of the things that are not yet finished.

Ideas containing events may not necessarily have a character assigned to them yet. How do people even write down ideas when you aren't willing to commit to the names of characters yet? "Person A meets Person B" is confusing to write and read.

The normal way is to use some kind of placeholder. For example whenever you want to have a minor character you simply write down {MinorCharacterWithGrayHair} or something like that. It's best to try of something interesting or somewhat remarkable whenever you introduce a character to make it easy to identify them. You can then create a stub page for them and once you get around to give them a name and some characteristics you can update their main page. Whenever you then come across such a reference you can look at the referenced page and update the name.

If the characters are really just background characters and you feel that the above approach is better to be reserved for you main characters with yet-to-decide names you could of course just use a placeholder without referencing a new page each time. Something like {OldMan} or {LittleChild}.

Wiki and Flash are all well and good, but here's an answer for lazy people, like me. I use OneNote. It's already on your Windows, and it requires 0 level of tech-savvy. I am a Wikipedia editor, so it's not like that's beyond my technical skills, but when I come to planning my story, I want to do just that - plan my story. No overhead. OneNote gives me just that: it's intuitive, it lets me add images, links, tables and text formatting, layer notes, Ctrl+F on the whole notebook, drag-and-drop ideas. It's not perfect, but it's good enough.

Whatever software you're using, consider this: ideas don't just come when you're sitting by a computer an actively planning. They come when you're commuting and bored, when something draws your attention on the street, etc. A useful way not to lose those ideas is to do your planning on a software that lets you access your file from multiple platforms, including your phone.

@Secespitus gives an excellent answer regarding placeholder names, so let me just stress one element: don't just call your old man OldMan: call him {OldMan} (or some other markup). The difference is that once you have several dozen names for places and characters, some of them still placeholders, other replaced with what you're actually going to use, you can search for the { to find what you still need to find names for.

TL;DR Anything from Microsoft Paint, to general FlowChart designing programs will work (you should probably start with a flowchart regardless, but that's just me). Everything else in this answer is commentary, with emphasis on how I did it in Flash.

Welcome to the world of plotting. Things here are a little different than what you might be accustomed.

First let me say that I work with what works for me. That being said, back when I designed games, I would work storyboard-style.

Meaning I would start with drawings. I would work out 'stick figure' characters and give them all temp names (just random names from a name generate like http://nine.frenchboys.net/ ). What I would then do is just work out the story in rough strokes.

So. Simply put, seeing as I used to work primarily in Flash (back when it was Macromedia), I would just start drawing and add frames as I went on a single timeline.

(above is a picture of the TimeLine in Flash)

So, what I would do (and the reason I add the picture is to help anyone that doesn't know what I mean), is put in the still frames of everything I need to happen. If I feel something should happen in between, add a frame between them. One layer would have the stick figures that I can play with as I feel was needed, another would have names, another would have dialogue and/or actions to keep it all in context.

And in the first frame, I would have an overview of how it all ties together (along with frame numbers so I know where to find what). This gave me one 'grand master plan', and helped me to organize. But that was... 15 years ago? Surely someone has more up to date ideas.

But really, I would mostly have the grand scheme planned out in my head, and would usually just put it into visual representation in the master plan file (as a checklist almost).

Why do people have to do everything on a computer?

Use pen and paper

Even software developers often (if not most of the time) do their brainstorming, planning, and outlining using analogue media: 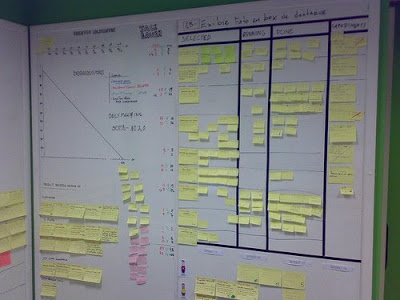 A whiteboard is hard to beat in flexibility, a paper notebook is hard to beat in versatility – and you can even take notes when you go jogging (I always carry a pencil stub and a folded piece of paper) or take a shower (just try getting water on your laptop).

I plan in Scapple by Literature and Latte. It's sort of a mind map story board.

At the time of writing this, it's only $14.99 so very reasonably priced, really easy to use and the technical support is fantastic.

Every possible idea for my story goes into Scapple. I gather pictures of characters, lists of names and titles, I write out bits of dialogue and make notes for scenes. It all goes in until I'm ready to do a full story plan.

The great thing about it, unlike storyboarding on paper, is that you'll never run out of space (the board just grows and grows), you can export all the text and import it into your writing software and even copy and paste pictures across if you need to.

This is my next novel, gradually coming together: 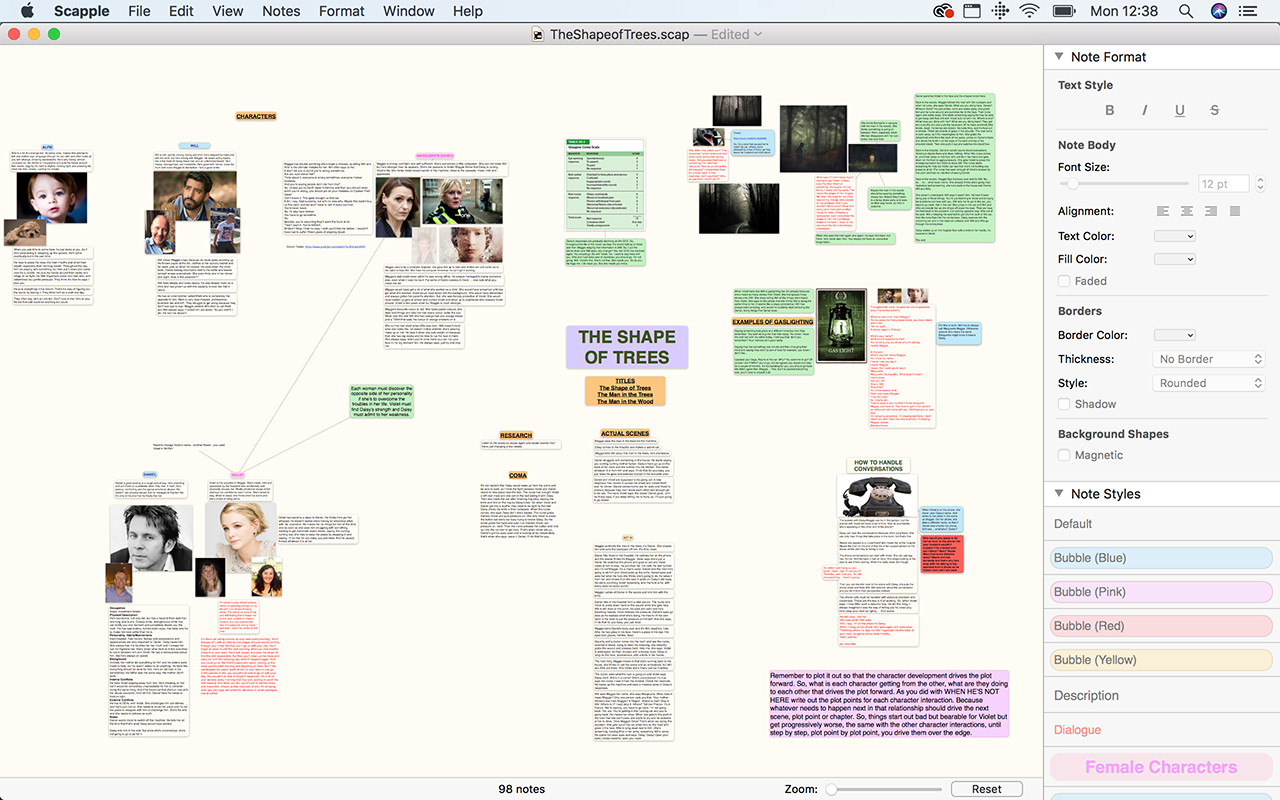 Not the answer you're looking for? Browse other questions tagged creative-writing software planning ideas videogame or ask your own question.

24
What should I do when I am stuck on names during freewriting?
4
Documenting story in a videogame

55
How does one deal with world builder's syndrome?
10
What tools do you use for your writing journal?
3
Should I use ideas for my story now, or in a sequel?
7
I'm unable to figure out the logical solution to a problem; how do I keep writing?
2
Program for Tracking Scene Information
2
How to fill up novels in the series after the first one?
8
Cutting down story length without leaving out locations
14
Should I focus on ideas which the market enjoys, or ideas which I enjoy?
3
How do I stay motivated while planning a series of novels?
2
Planning story using layers, compartmentalization, and time