Number of People on a Team [duplicate]

I want to build a team.

This team consists of people with diverse powers. Each of them has a different power, and some number of them are spies (one or more, I haven't decided), so they have a different actual power than they say they do. There are also several powers which none of the team members have.

I'm thinking about six characters on the team. There's only one POV (this person is also on the team), but five supporting characters with different powers, as well as one person without any powers. The relationships between the POV person and the rest of the people differ. The physical and behavioral characteristics of the team members differ.

I admit, reading this description I am a little confused.

But if I follow your POV character, and he meets these people over time, bonds with them and learns their names, discovers their powers individually, and forms a team with the usual Five-Man Band dynamics (+1 for the odd spy), this is a well-known formula for teams. 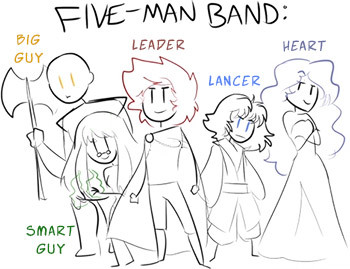 These traits are supposedly designed to compliment each other, but you can also see they are simple variations of two aspects: the "strength" of their superpower, and the "goodness" of their character.

The Odd-Man-Out, #6 the Spy will likely have a very strong power (or several) but ultimately have the worst character allowing him to betray the team. #6 may be able to beat any other team member in power, even the leader, even the brains. He is arguably so powerful he should be the leader, in fact this may be a source of conflict if the Lancer respects abilities more than character. Heart will see his flaws immediately, but being underpowered would be an excuse to discount her (or drop her from the team). In the end, his character flaws prevent him being a true leader. It will take the entire team to defeat him, or he might leave on his own rather than admit he can't hold the team together.

Six or seven is not too many on a team, for a story.

The problem is making sure you can make them distinct and don't have two or more people doing basically the same job in the plot.

The problem with big teams is writing them; it is a lot of people to introduce and make unique and that puts a lot of pressure on the author to make that happen and NOT seem like an info-dump.

To me, Stephen King in The Stand has the best way of introducing a large team (in a long book), his "leader" starts alone, undertakes a quest (due to a dream), and meets his team one by one on this quest, a scene for each of them. It makes sense, they are all having the same dream quest and headed to the same place, etc.

That way, the reader is 'naturally' introduced to each character doing something (meeting the team-so-far for one) and this provides tension or conflict in coming to trust each other (you never know when you might be meeting a murderous gang or bad guy), etc.

But those are all story mechanics. The answer is, your team isn't too large, but definitely avoid early info-dumps trying to introduce that many people at once. It demands far too much telling and thus demands too much memorization from the reader; which they absolutely will not do. That means they will become confused by who-is-who on the team, that leads to boredom and putting down the book.

The antidote to that is slow introduction, lengthening the first ACT of the novel.

Not the answer you're looking for? Browse other questions tagged characters or ask your own question.

8
How do you write a story about a team?
33
How many characters are too many?

8
How to organically and believably introduce the tools and skills necessary to survive after an apocalypse?
12
How to write a convincing character with a opinion that differs from the author's?
18
How to make clear what a part-humanoid character looks like when they're quite common in their world?
8
How best to describe multiple alien species in a short amount of time?
11
How do I handle an unequal romantic pairing in a world with superpowers?
2
Does This Geopolitical Power Balance in my Setting Make it Look Like I am Promoting Colonialism?
3
How to write dialogue with a large group of characters