Writing on the sides of Buildings [closed]

I sometimes see poetry and art and word-based graffiti on the sides of prominent buildings and it's often inspiring and sometimes wonderful to see this.

A couple of examples of what I mean:

It seems to me that this has, in some cases (perhaps less often when it comes to graffiti) been officially sanctioned, and when I see a particularly interesting piece I think to myself 'yes, I'd like to do that too!'

Where do I apply (assuming I were wanting to do this in your part of the world) for permission to publish my writing on the sides of buildings?

NB I am not interested in the legal aspects of this matter; I simply want to know how to go about publishing my work on the sides of buildings as per the first example I gave.

I would assume that you should start by getting the permission of the building owner. Take a picture of the building and use photoshop or gimp to add your words to the wall in question. Then show it to the owner and see what they think.

Once you have the owners support, both of you should probably attend the next public meeting of your city council to get official permission before investing more effort in the project.

One of your examples ("Leon the Frog") originated as unauthorized graffiti which gained a quasi-official status over the years. This occasionally happens with particularly artful graffiti, but it is, of course, illegal, and I can neither comment on this pathway nor endorse it.

In the case of authorized graffiti, it's typically a decision in the control of the building owner. However, different municipalities have rules and laws about what can and cannot adorn walls in public spaces. In my home city, Columbus, there is an advertising agency that specializes in large scale outdoor advertising on the sides of buildings. Their expertise is often called on for public art installations as well, since they have the background, the connections and the skill set to make it happen. There may be something similar where you are. Keep in mind, there may be some considerable expense and difficulty in making this look good, unless it's quite small. 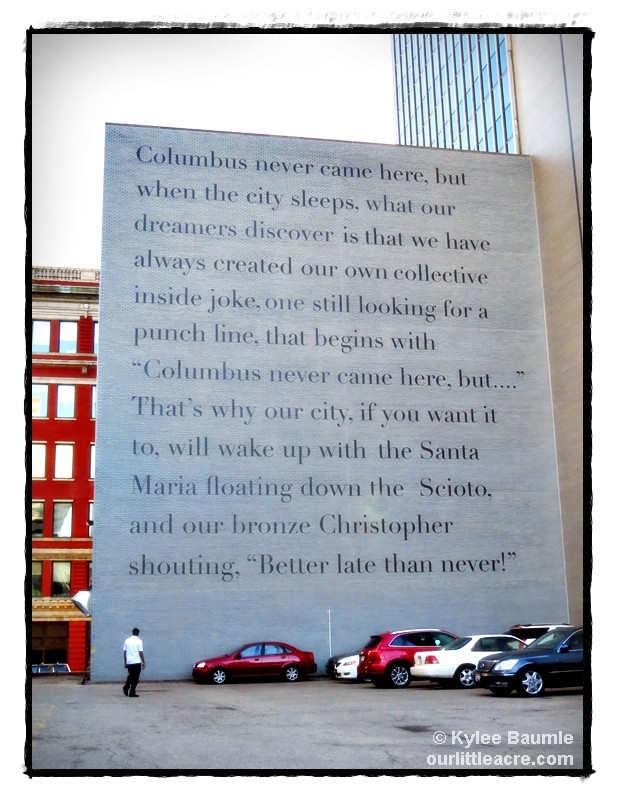 As with any publishing project, your job will be to convince the "publisher" (the building owner, and/or the municipality) that your words are worth being reproduced (in this case) in foot high letters.

Not the answer you're looking for? Browse other questions tagged creative-writing publishing or ask your own question.

3
What should I do after I finish writing my novel?
6
Writing a story online
4
Are authors who self publish respected in the writing world?
4
What to do with first writing
13
Is it true that stories get rejected simply because the stories are not appealing enough and not because of the quality of the writing?
3
Are the most successful authors like Stephen King and Jk Rowling all trade-published?
2
As a new author, is it possible to sell a book to a publisher within one or two weeks after you've finished writing it?