How to describe panel layouts in a script for a comic book?

What is the "best practice" for describing the layout of panels in a comic script? I have already done the layouts for these comics, but can't draw, so I want to write a script to give to a potential artist. I'm not sure how or where to describe the page's layout with respect to panels.

The way I've been doing it so far is to put a description at the start of each page where I say something like Page is divided vertically at 40/30/30 and each row is divided horizontally at 50/50, where the numbers are in terms of percentage of page height or width.

Is this the correct way or is there a better method?

For tools I am using Scrivener + this workflow guide.

The common practice is not to describe page layout in a comic script at all – that's typically the domain of the penciller.

If you want to suggest or prescribe a layout to the artist, you can insert a thumbnail in your script. The comic script format itself does not have a convention for describing or including layout – you'll have to insert an image.

Here is an example of a page from Archie Goodwin’s script for Batman: Night Cries, including a suggested layout, as it was reprinted in The DC Comics Guide to Writing Comics by Dennis O'Neill: 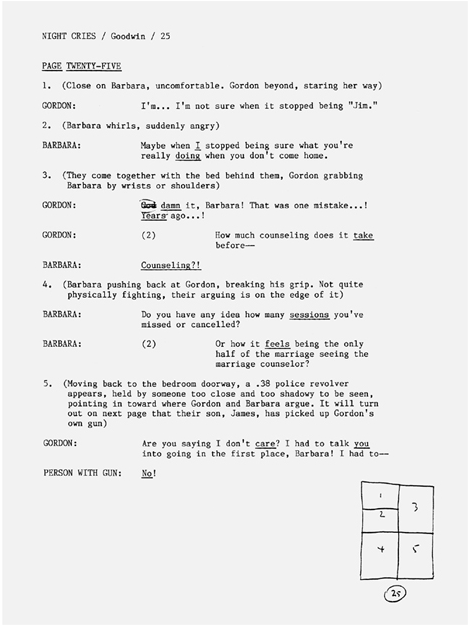 I think an image is easier to understand than your percentages.

Not the answer you're looking for? Browse other questions tagged script conventions comics or ask your own question.

2
Improving Ad Script
1
How can I find an agency for copywriting/script writing (for advertising) in the UK?
2
What is the ideal approach to writing a script for a comic book?
0
Asking for help in pitching and writing a script
3
Sample Script Submission
0
When writing a script, is it okay to use sentence fragments?
5
Podcast Script - Recurring Elements
6
Owning comic book characters