Is there a software for story writing with detailed character files and an interactive timeline? (other then aeon timeline and scrivener)

Plotist seems to be a good start, but their timeline is too simple and doesn't even have actual date or time on it... Also there character profiling could be more organised and interactive with their system.

This would be perfect:

In the past, I've used Aeon Timeline and found it fairly straightforward. It does have a lot of customizations so it took me a bit of poking around to see what all it could and after that I was able to add multiple timelines, characters, races, dimensions, etc. and surprisingly it can handle very large date ranges in the millions of years, which may be useful for some.

Hope this is close to what you're looking for.

Patchwork is a specialized writing software created by Austrian programmer Martin Danesch. It has the same functionality and document structure as Scrivener (invcluding "scrivenings", "corkboard" and outlining view – I'm using the Scrivener terms here). On top of that it has an integrated timeline functionality that is, in my opinion, superior to using Aeon Timeline with Scrivener, as well as a nice character development tool.

Patchwork has two major drawbacks, though: it looks ugly (like an old Windows program) and it is only in German (although I think you would be able to learn and use it even if you don't know the language). For German, it provides the best spell and style checker the planet has seen.*

* The same spell and style checker is available in Papyrus, another German language writing software.

The Patchwork timeline feature is well explained in two videos and two blog posts (one and two) by the creator of the software.

I'll try and give a rough overview, using images from the blog. 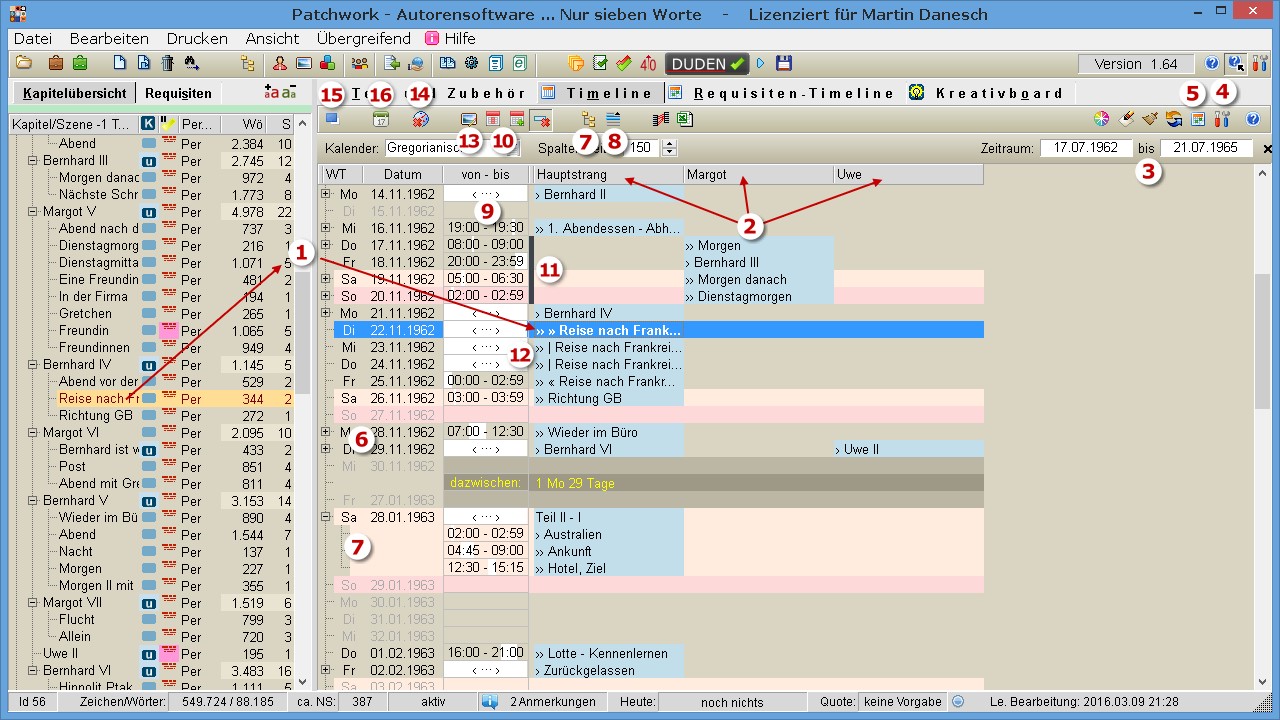 Similar to Scrivener, a story in Patchwork is divided into parts, chapters, and/or scenes. An overview of (in this case) the chapters is on the right. Each chapter is represented in the timeline on the larger left-central window (1).

In Patchwork, there can be an unlimited number of storylines (2). Weekends are represented in a different color (here skin color and pink). (By the way, you can change all the colors in Patchwork, including the background color (and font) of the windows. You can store different preferences as "skins".)

Periods without events are collapsed (here: the three brown lines) and show a count of days (here, in yellow: 1 month 29 days). These periods can be "unfolded" (8).

You can use the default Gregorian calendar or create your own "fantasy" calendar (5). 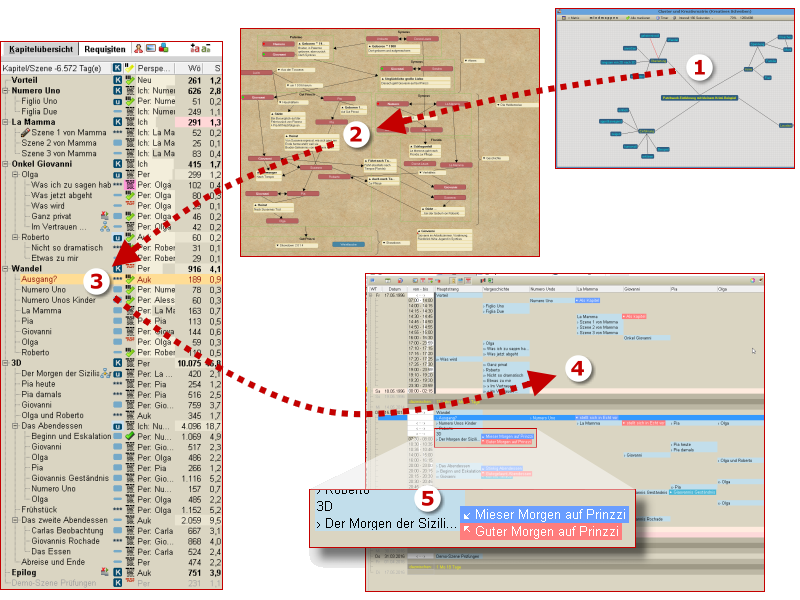 In Patchwork, you can begin brainstorming a story in a mindmap tool (1). Items in the mindmap automatically appear on a freeform corkboard, where you can add a synopsis etc. (2), in the chapter overview (3), and the timeline (4). Changes in one representation of your story automatically affect all the other representations.

The timeline has more functions which you can see in the videos linked above. Even if you don't know German, the functionality will become apparent to you from the demonstration.

I suggest that you use a spreadsheet software, because it allows you to combine a flexible timeline with a flexible outliner.

This solution has the following advantages:

I'm currently outlining a middle grade novel with three parallel storylines, and today I was struggling a bit with figuring out how to synchronize the different storylines. Does the son solve dad's dating troubles before he solves the burglary case, or does he catch the thief first? Stuff like that.

I began outlining in Scrivener, my writing tool of choice, but I soon got lost on the "corkboard". I'm using labels to signify storylines, and arranging the "index cards" by label on Scrivener's corkboard gives my a nice overview of how the story develops over the different storylines: 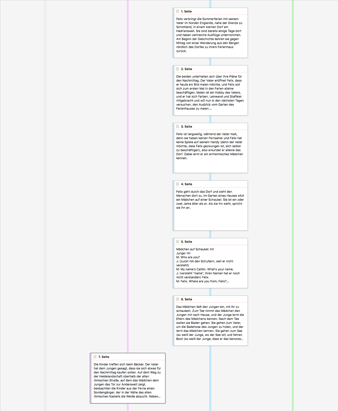 But as I was rearranging the index cards, rewriting their synopses, and moving the whole story forward and backward in time, I was often confused what day I was seeing in the current window. I wanted certain events to take place on a Friday afternoon, because a government office the protagonist needed to visit would be closed over the weekend, but when I inserted a day and moved the whole storyline back one day and then moved other events around, I no longer knew what was happening when, because Scrivener doesn't display dates on the corkboard. Maybe it does, when I set up the dates in Aeon Timeline, but when I imported the Scrivener project into Aeon Timeline and had to choose dates and times and realized how long it would take me to set this all up when all I needed was the day of the week and a division by morning, afternoon, and evening, I gave up and instead installed the demo for Patchwork, which I have recommended in my other answer to this question.

It took me about fifteen minutes to download and install Patchwork, but when I began setting up the timeline there (choosing "8:00-12:00" for "morning"), I realized another problem: the timeline in Patchwork only shows the title of a chapter, but not the synopsis (see the screenshot in my other answer).

I realized that what I wanted was a combination of corkboard and timeline on which I would be able to both work on the chapter (or scene) synopses and see the time the event takes place, but with a flexible time system where I don't have to chose hours and minutes, if all I need is the day of the week and the afternoon.

Then it came to me. I remembered how I had developed my characters in Excel and that a corkboard and timeline are both basically tables.

But I also remembered how I had struggled with developing characters in Excel for a previous project, because there is a limit (of 409.5 points or 546 pixels) for how high a row in Excel can be. That's usually not a problem when you use Excel for data, but when you use it to write outlines you will want all the text visible all the time, but in Excel text will often be longer than a row's maximum height and get cut off. You can, of course, merge cells to create higher cells, but this destroys the parallelisation of character traits that the rows in a cell represent, and I don't really want to merge cells every time I hit he max cell height.

And while I sat in front of my computer with the Scrivener corkboard open and thought about this, I noticed that in fact this is a problem in Scrivener's corkboard, too! In Scrivener the index cards all have the same size, and text that is longer than fits on the card is not shown while you don't work on that card. This makes both Excel and the Scrivener corkboard useless for outlining, unless you limit yourself to brief scenes or shorthand synopses.

Fortunately for me my Microsoft Office license has expired and I had been looking for a replacement for Excel because I didn't want to pay 99 Euro a year for an Office 365 license for my family, and when I opened my old Excel character development sheet in Numbers I was pleasantly surprised to find that Apple's Numbers doesn't have a maximum row height (or not one that I have managed to exceed yet), and it is free (if you have a Mac – and I have three!), so I began to outline my story in numbers, and I realized another advantage of a spreadsheet software over a timelining application or a corkboard: the spreadsheet app allows you to have one scene belong to multiple storylines! And this makes perfect sense and is in fact essential, because storylines intersect, and anything from half a sentence to a couple of paragraphs in any scene or chapter can belong to another storyline than the rest of it.

So what I finally did, and will happily use for my next project again, was create a spreadsheet in Numbers with the first three columns representing the timeline – day of the week, date, and time (in my case "morning", "afternoon", "evening", and "night") –, and then three columns (or as many as you like) for the outliner – in my case three storylines, highlighted in different colors: 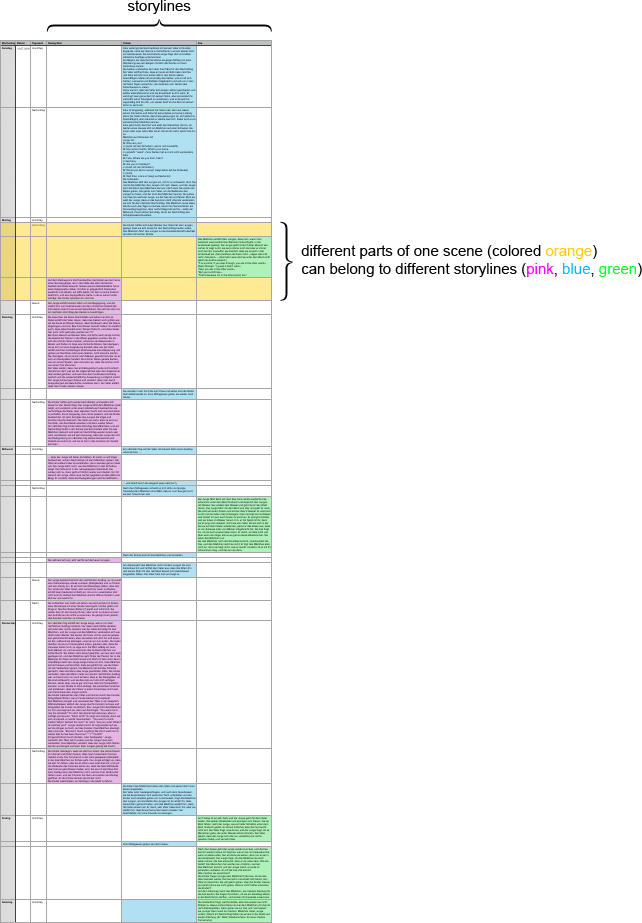 I suggest the Write Brother's line of software.

Writer's Dreamkit is the beginners version of Dramatica Pro, both of which are available for Macintosh (natively) and also Windows.

The primary feature of either version is their unique Story Engine, which is essentially a database consisting of a series of question chains which ask an in-depth series of questions designed to dig out of the author what they know about their story, but may not have actually written down or thought through completely.

These question-chains (about story, topics, as well as character motivations, methodologies, purposes, and evaluations, in addition to character development tools) are complemented by a series of specialized Reports which are designed to cross-index and cross-reference the various answers about the scenes, characters, and plot elements; all designed to reveal to the author aspects and relationships present or missing between the various elements of their story which may not have occurred to them.

There are many, myself included, which find these tools useful to brainstorming, story and character development tasks, as well as it being a handy central database of all the different chunks related to any given story.

It functions offline, though for those times when one is not offline, there is a useful and extensive online Theory book, which also has a lot of useful information.

Not the answer you're looking for? Browse other questions tagged creative-writing characters software timelines or ask your own question.

22
Software for developing and organizing characters
16
Software to draw plot structure charts
7
Outlining A Novel - How do you make it less of a slog?

7
How to work with in-text markup for figures and captions in Scrivener?
3
What software do you use for writing and then structuring a book?
8
Is there a standard for dealing with lyrics in dialogue and narration in creative writing?
3
What is an easy way to create a detailed character profile for a short story?
1
Does anyone have experience with using dictation software for creative writing?
3
Any software that allows me to create documents and maps with links to other documents or photos?
5
Are there tools/software for planning your story using nested mindmaps and references to characters?
5
Are chapters with a single character inherently more difficult for an average reader to connect with? (And do you have any tips.)
16
I accidentally added a character, and then forgot to write them in for the rest of the series