How to describe 4 main characters at once without overloading the reader with information?

My main characters first appear in the book all at once. How do write their descriptions so that the reader isn't overloaded with so much information all at once?

It is not uncommon that a group of characters are introduced all at once. For example, C. S. Lewis' The Lion, the Witch and the Wardrobe begins with the sentence:

Once there were four children whose names were Peter, Susan, Edmund and Lucy.

The first paragraph does not distinguish between the characters and speaks of them in the plural instead, relating how "they were sent to the house of an old Professor" and that "they liked him" when "he came out to met them".

This is appropriate when the differences between the charactes aren't yet important and the focus is on their shared fate. Differences are introduced as the roles for the four children begin to differ.

Best practice is when the (main) characters of a work of fiction are clearly distinct.

Think of the silhouettes of the cast in an animated movie (borrowed from here): 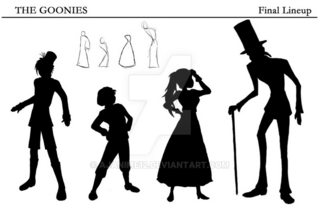 In fiction, where your readers cannot see your characters:

When you introduce your characters,

After that introduction, slowly reveal more about each character over the course of the next chapters. We don't usually have infodumps about people we get to know in real life, either.

By rewriting the book so that the four main characters are not introduced all at once. There is a good reason that most books introduce characters one at a time or two at a time (in the form of a conversation). Readers need time to integrate each character and form a distinct memory of them.

This is no different from meeting people at a party. If you meet one person and talk with them for 20 minutes, there is a good chance you will remember their name and what you talked about at the end of the night. If you meet four people at once and they all talk, there is little chance that you will remember either their names or what they talked about.

This is just the basics of how we form memories. No writing technique is going to change that, except to space out the introductions so that the reader has a chance to form and retain memories of each one in turn.

Not the answer you're looking for? Browse other questions tagged characters description or ask your own question.