I have done a little research on the different points of view, and want to delve further into the ways in which the execution of a story varies between first person and third person omniscient.

The first way(that I know of) in which the writer has to alter their story is through the types and amount of information they give to the reader. In the first person, the information is only known by the character/narrator of the story. Whilst in third person omniscient the reader experiences information far beyond the knowledge of the main characters.

Any insights would be greatly appreciated.

There are a wide variety of narrative devices, among them the following: 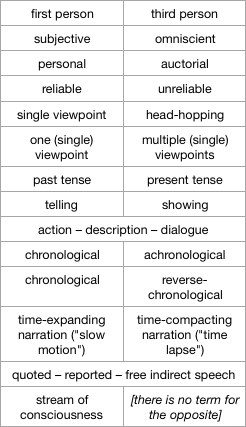 No narrative device is specifically tied to first versus third person narration.

To use your example:

It is not true that a first person narrator differs from a third person narrator in the type and amount of information they give to the reader. A first person narrator can narrate events that took place in the past. Long after the events in the story, the narrator has now learned all the relevant facts, for example by talking to the other persons who were part of the story, and is, at the time he looks back on his life and narrates the story, an omniscient narrator who can give the reader information that he did not have while he was living the events. A part from such a narrative might read: At that time I didn't yet know that .... But there are omniscient first-person narratives where the narrator-protagonist dies at the end of the book and the omniscience is not explained.

On the other hand, a third person omnisicient narrator might withhold information from the reader (e.g. to increase suspense, something that is commonly done) or lie to the reader, so while the narrator might be omniscient, the narration isn't.

Similarly, neither genre nor timespan nor speed of events are tied to first versus third person perspective.

Not the answer you're looking for? Browse other questions tagged style or ask your own question.

11
How can multiple viewpoints be used without breaking the flow of the story?
18
What is "head popping" and why is it bad?
5
Perspective and Balance with Multiple Characters
1
Is my method of Narration switching from objective to subjective too complicated?
5
Choosing between first and third person
3
Told my plot is good but my writing style is weak. Please help
7
Is First person perspective more intimate than Third person perspective?
11
Third Person POV: What level of telling is acceptable for character motivation?
3
How to show a character with multiple personalitites?