When we start a book from the climax (from the middle of the chapter), what is it called?

Let's say that we have a plot that goes from A-Z and M is the middle (climax) part of it. There is this style of writing in which we start from M, then again back to A-Z.

At the start of a book is the chapter containing that M. What is it called? Prologue? Prelude? Or is it something else? I've Googled for this for almost 20 minutes with no luck. It isn't mentioned anywhere.

In medias res does not mean that a story is narrated from its middle. It means that a story begins in the middle of events instead of introducing the characters and the setting first (this is called ab ovo, "from the egg onwards").

Stephenie Meyer's Twilight does not employ in medias res: the novel opens with a slow and quiet scene in which the protagonist moves to a new home; we learn of her family background, and her new surroundings are extensively described. The events that are relevant to the story in Twilight begin after this introduction and not "in the middle of things".

Horace coined the term in medias res when he praised Homer's Iliad in his Ars Poetica for not beginning his narration of the Trojan War at its beginning but in the middle of things. The Iliad begins at a point in the story where Troja is already besieged by the Greeks and Chryseis is held captive by Agamemnon. The narration does not start in the middle (where Hector bursts through the defensive wall) or near the climax (when Achilles stabs Hector), but it does start in the middle of an existing problem.

You can think of a story that begins in medias res as one story in a sequence of stories. For example, the Iliad is preceded by the works of Euripides, Sophocles, and other literary works and legends about the Trojan War. Twilight on the other hand is the first story told in its world and it does not have a prehistory that its protagonist is already involved in at the beginning of the narration. Bella's story begins as she moves to Forks and meets Edward there.

Stories that begin in the middle, usually tell their beginning "in flashback". A flashback is "an interjected scene that takes the narrative back in time from the current point in the story" (from Wikipedia). Sometimes a large part of the story or all of its beginning is told in flashback from its middle, as in the Odyssey:

In the Odyssey, most of the adventures that befell Odysseus on his journey home from Troy are told in flashback by Odysseus when he is at the court of the Phaeacians. The use of flashback enables the author to start the story from a point of high interest and to avoid the monotony of chronological exposition. (Encyclopædia Britannica, s.v. Flashback)

In my schema above, the dotted part of the story that begins in the middle is told in flashback. See also the illustration below.

A flashforward is "a scene that temporarily takes the narrative forward in time from the current point of the story" (from Wikipedia). Often, especially in crime fiction, a flashforward is used as a prologue. 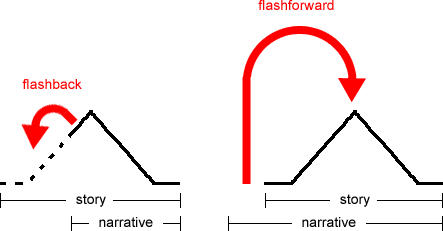 I believe "flashforward" is the term you are looking for. There is no special term for narratives that begin with a flashforward.

There is a term for a story told in reverse order from the end to the beginning, and that is "reverse chronology", but that is not what you're asking.

TVTropes.org refers to this as

How We Got Here

A type of In Medias Res/Whole Episode Flashback, where the story opens at a point at the middle or near the end of the story, and the bulk of the story is spent showing how the character got to this point.

A great example would be the episode of Firefly called "Trash" that opens with Mal sitting naked on a rock in the desert saying "Yep...yep, that went well."

Not the answer you're looking for? Browse other questions tagged structure plot chapters or ask your own question.

21
How to prevent turning off the reader at first with a protagonist with unlikeable traits but that becomes better later on?

3
Does my story structure for an ensemble zombie story sound effective?
13
How to write from the middle?
3
My story passes in choppy blocks - how can I fix it?
5
My Conflict Doesn't End at the Climax. What can I do?
6
How early in the narrative should I start my book?
4
How can I prevent the ends of my chapters from feeling forced?
7
When should the protagonist have a self-revelation?
6
How can I start in media res and provide enough back-story to hook people, all in the first chapter?
1
Is it confusing to name a chapter after a non-POV character?