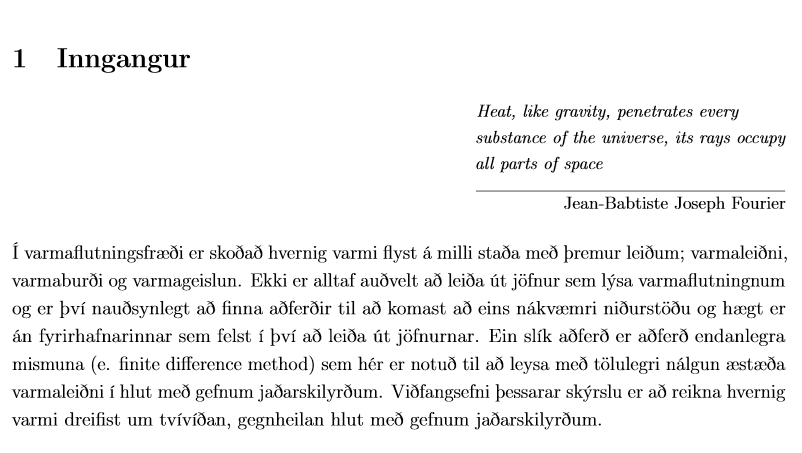 What do you think? Is there maybe another solution that we're not seeing?

Your answer lies in what the convention is in your field.

You could argue for both possibilities. An epigraph on a separate page before the ToC may convey a sentiment that applies to the entire paper. An epigraph at the beginning of the introduction could also be used as a counterpoint.

Whether you should include an epigraph is debatable. Some scientists love it, others hate it, but the majority does not have a strong opinion.

From the introduction onwards it is preferred you write a scientific paper as dry as possible. That means de-contextualized and aesthetic content that is not elaborated upon should be avoided.

Used in many scientific articles. The epigraph as well as the long quotation require a 1 inch indentation.

Used in social sciences. Dates play an important role. Quotations are included in the body.

Fourier (1822) stated that "heat, like gravity, penetrates every substance of the universe, its rays occupy all parts of space" (p. 1).

The epigraph is notated as a block quote. Usually placed before an other passage. Does not need to be included in the reference list.

Heat, like gravity, penetrates every substance of the universe,

Unconventional methods (?) but okayed by the supervisor or board of examiners. If it's okay by all your supervisors, that's the way to go, at least for that paper, because they will grade you. Highly recommended to ask your supervisors or mentors if available. 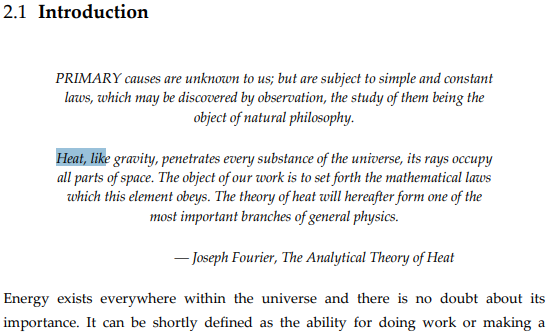 Before the abstract on a separate page:

The abstract is usually placed directly after the title page. It would be better to place the epigraph before the ToC instead. Couldn't find Fourier for this one, so I got the other famous physicist.

Not the answer you're looking for? Browse other questions tagged style formatting or ask your own question.

3
Is there any research about the efficacy of illustration and example placement in procedure writing?
3
PhD thesis: how to visually separate the “general conclusion” chapter from the last part
7
Benefits of Chapter titles in fictional writing?
3
Told my plot is good but my writing style is weak. Please help