What is the best description for this particular kind of building (and apartment arrangement - Central European style of building)? 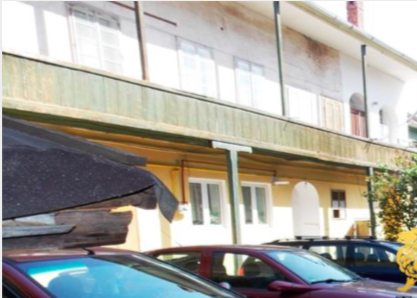 I'm looking for the word to describe of a particular type of apartment building. I attached a picture to illustrate it.

It is a building that has several apartments on each story with an exterior corridor/passage linking them. What word best described this architectural style?

Single loaded refers to all apartments being on one side of a corridor, hall or other accessway / circulation path.

Colonnade describes the row of columns supporting the balcony, which functions as an arcade at the ground floor.

@Morgan Meredith is correct that in addition, architects, designers, planners, developers, and builders would add a letter descriptor for the shape of the building's floorplan (how the building would look from directly overhead) such as "H" shaped, "L" shaped, "U" shaped and so on; if the building footprint is square with a large space in the centre that would be a "courtyard" building (in some places called a caravanserii) which are common in locales with significant diurnal heat buildup.

P.S. - I'm an architectural designer - been in the field for over a decade, working on multi-family housing, affordable housing, mixed-use projects, commercial, single-family residential communities, university student housing, university dining commons, and so on - so you could say this question's right in my wheelhouse!

I would call that a "motel-style apartment block". You can further describe it by the shape of the building (H, L, T, E, or square).

I don't know of any commonly-used term to describe this type of building. I wouldn't be surprised if architects had a name for it, but most people probably wouldn't recognize such a technical term.

If you want to be clear, I think you need to take a sentence or so and describe it.

Not the answer you're looking for? Browse other questions tagged technical-writing word-choice description or ask your own question.

1
Complimenting on solid structure with no major flaws
23
What's with all the hate on adjectives and adverbs?
7
How do I get rid of overused words in my story?
6
How to develop a more vivid and descriptive writing style
16
How to refer to clothes without modern words ? (e.g: t-shirt)
3
When Choosing Labels/titles for Characters instead of their names
86
Using real words from a foreign culture feels like 'Calling a rabbit a "smeerp"'
20
Detail vs. filler
0
Mapping relationships between topics in a non-fiction series