How to use small caps in stage directions of a play?

I hate asking this, but for some reason I am utterly confused: is small caps not capitalized? I assumed if I wrote a characters name, "JASON", for instance, and then highlighted it and selected the small caps feature, that it would change it slightly--but it doesn't. I've never used it, a play submission calls for it, so this is my first time fiddling with small caps. So do I just write "jason" in lowercase letters and then change it to small caps? That seems to look right, but I want to make sure.

The answer to this question might vary depending on your word processor, operating platform, etc., but, near as I can tell from messing around on my Mac just now:

As an example, I defined two styles in this document, one using ALL CAPS, and one using small caps. Then, I typed the names JASON, Jason, and jason into the document. 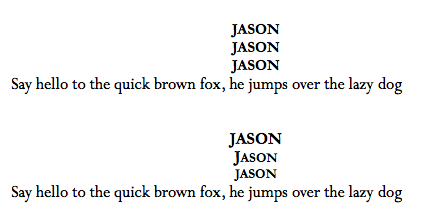 As you can see, the three in ALL CAPS look identical, no matter how I type the name. Therefore, I'd recommend using ALL CAPS with a slightly smaller font, to give the effect of small caps – no matter how the name is typed.

I would also highly recommend not changing the font entry by entry, but instead using a font style each time. That way, if you don't like the way it looks, you can simply tinker with the style, and the change will propagate automatically through your script.

This is a stage play format question, and you don't list which submission format is specifically requested. Yale Drama Series play format calls for SMALL CAPS (which I'm not going to muck about trying to replicate here on SE).

SMALL CAPS is dependant on your typeface. Most popular typefaces define the SMALL CAPS size, kerning, leading, line spaces and other typographical features.

Your word processor should allow you to set a word as SMALL CAPITALS in the character font effects setting. Final Draft has it in Format > Style.

The submission guidelines should have stated something like 12-point Times New Roman. In that case just style it as SMALL CAPS and let the software do the spacing math.

Do not override the font size or any other font styling for the small caps. So don't add bold or italics.

Jason, JASON, jason and jaSON all look the same in SMALL CAPS but you should always type the name the same way because to computers they are different names. I use Jason so that if I ever lose formatting I can read his name without pause. Alternatively you can use JASON because you'll know that's a speaking character.

Not the answer you're looking for? Browse other questions tagged playwriting or ask your own question.

1
When developing a stage play, whose gender matters more? The characters' or the actors'?
1
Playwriting: What is the difference between parentheticals and stage directions?
5
How to present asides in play writing?
4
How to approach the Novelisation of a Play
2
How do I make a repetitive element in a play interesting?
4
How can I keep dialogue attached to character names in a Pages play script?
1
How do I write a "take action" scene for a play?
4
In a stage play, how should the script refer to minor characters whose names are irrelevant?
5
Is there a way to describe casting and costuming notes for a stage play?