I know this sounds like an oxymoron, but these do exist. I have some examples here, and some of them include movies.

Clearly tragedies can sell regardless of what type they are. Your heroes do not have to win. But, I'm interested in the ones where you're excited and leave on an up note inspite of the tragedy. I've not heard much about the craft of writing a successful feel-good tragedy and moreover what elements allow you to have a downer destination while leading the audience to a happy emotional state. Note, both types of stories can be successful and revered by audiences.

Question: What are the craft level things someone should be aware of when trying to write a feel good tragedy? Is there a formula? Is there something at work here in all feel good tragedies that can be replicated?

What is "upsetting" to the audience can be highly subjective depending on a multitude of factors; such as how connected the audience is to the main character, the culture of the audience, whether the Protagonist was intended to win in the end... ect.

I'd argue that some of the examples you have listed are not really "Feel Good Tragedies" and can only be classified as so, because they are part of a series, with expected follow-ups for the main characters.

However, if you're looking for a formula, a common theme in most stories that I would classify as a "Feel Good Tragedy" is that even if the Protagonist doesn't necessarily win, there is Hope that the Protagonist can win in the end. The key here being that the end state of the story, the main characters may not be in a particularly good position, but there is hope that the future may be brighter for them.

A lot of the writing for post-Apocalyptic stories focuses on this idea, that there may be setbacks, deaths, or other tragic events, but there is a glimmer of hope on the horizon for either the Protagonist or other characters.

Stories are an attempt to endow life with meaning. Where ordinary life seems possessed of a terrible randomness, we look to stories to assure us that there is actually meaning and purpose in life. This may or may not be true, but the thought that it is true is of enormous comfort to us, even in the face of tragedy. This is one of the big reason we are so fond of stories. It is one of the big reason why, far from wanting stories that are unpredictable, we actually demand that they be predictable, and take pleasure and comfort from the predictable ending.

A tragedy that we feel we can understand, that fits a story arc, that seems to have moral purpose, affirms our sense of order in the world at precisely the time we need it. Thus a soldier dies in battle defending an orphanage is a tragedy, but it has moral meaning, it affirms our sense that heroism is a meaningful and worth attribute of human beings and we feel good about that.

A tragedy that we don't feel we can understand, however, has a very different effect. An orphanage is destroyed by an earthquake the day before the children were going to be adopted into good homes. This affirms the randomness and meaningless of life. There is no heroism in it, no moral affirmation. There is nothing we can do but shake our fists at God. There is nothing to feel good about.

There is a common difference between the two separate sections you have presented. Between Feel Good, and Feel Bad - those two groups have a clearly defining difference, and that is that in Feel Good stories the protagonists are better off in the end of the story than at the start.

Think of the success of a character as being a line on a graph. 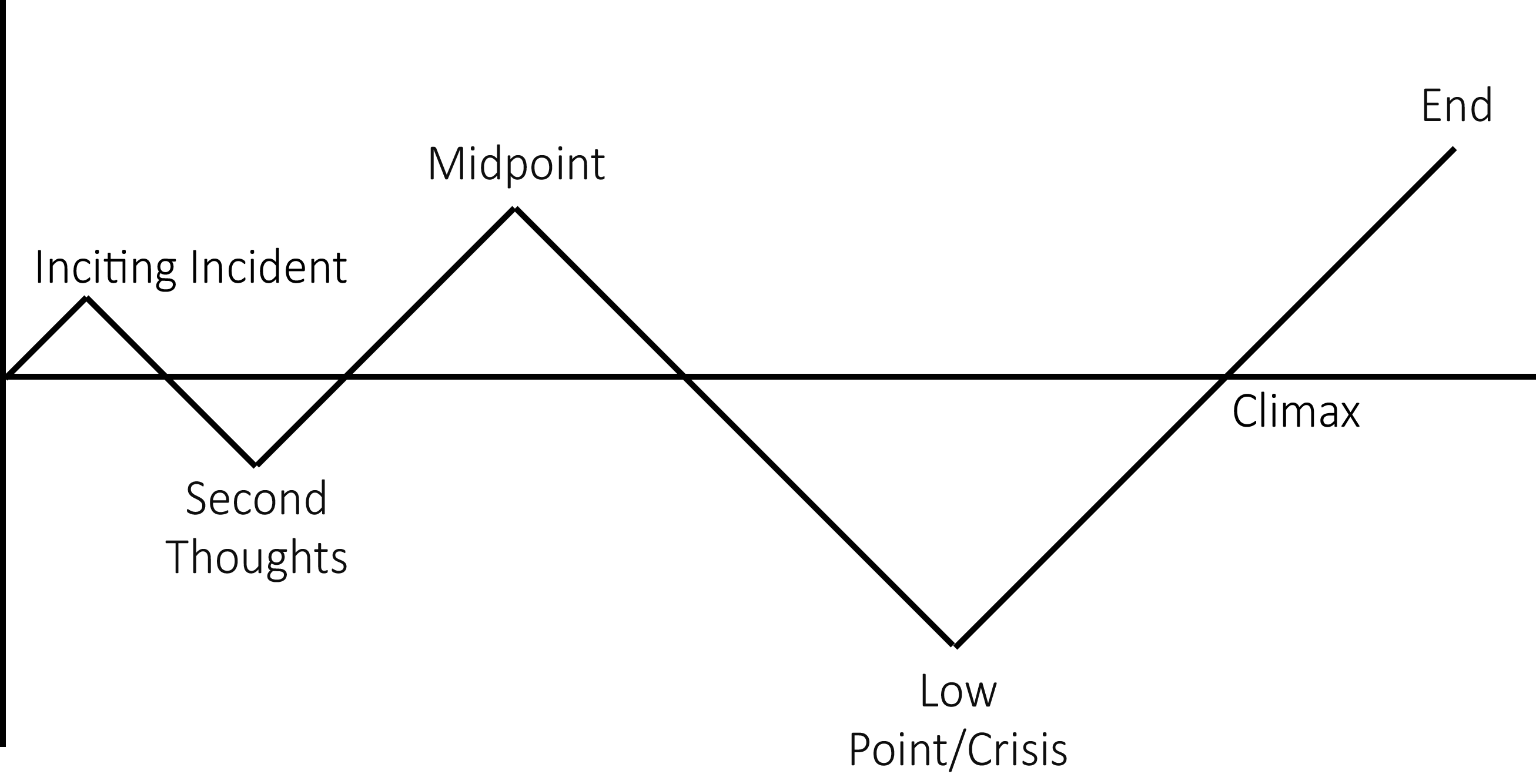 By the inciting incident, and where the character is fully introduced, we already get an idea of the characters current development - but then gain a twist that provides obstacles and a second thought, where the character begins to lose faith and confidence. At the midpoint, the protagonist gains leverage and grows closer to meeting their goal, before a twist occurs and they reach the low point - the furthest away from their goal.

For example, in the Empire Strikes Back, the characters gain new knowledge - Luke learns his father is Darth Vader, and gains a new arm. The characters in total gain new allies and more experience.

In contrast to this, in Titanic - the protagonists end up dying, they lose everything and end up with less than they had at the start. The same with Romeo & Juliet.

Deadpool is a unique one, the audience gains something - comedy and a laugh, but what does deadpool get? A pillow and a can of ice cream that he didn't have at the start.

A "feel-bad tragedy" is either a warning or an elegy. A relatable hero makes some bad choices and these lead to disastrous results. We watch it to learn what not to do in our own lives. Or, the film immortalizes something precious that is lost in the course of the movie, it is a tribute and a memorial to the thing it depicts.

On the other hand, a "feel-good tragedy" depicts a complete character arc, or the completion of a significant goal prior to, or through the agency of the tragic events it finishes with. In American Beauty (1999) the protagonist dies, but not before becoming a better person than he was. In Hero (2002), all the main characters die, but they die knowing their culture and values will live on and be respected. In Dead Poets Society (1989), a student dies and a beloved teacher is fired, but his spirit of creativity is embraced by his students.

Ok, I believe that a 'feel good tragedy' can start as part comedic in one part, or more serious. Push one of the ends to the extreme... Make it so even if the situation is bad, that you can still laugh, or look at it with a face other than crying...

A 'feel bad tragedy' instead, I believe that should focus more on developing familiarity between you and the characters, before suddenly making the characters that you can now relate or sympathize with experience a loss. That loss can be from something we can see in our life ( so we can understand the feelings of the character even better ) or even from unexplainable events that drive the main character that we now know well, mad.

I aint sure if I answered well enough for your standards,but I was simplistic, and that's what I wanted to be... There are 2 kinds, the one that thinks that its all the detail that ruins it, and wants to relay it more simply, but still getting his point in. Ahd the one that is focused, detailed and always has a plan.

Not the answer you're looking for? Browse other questions tagged style technique or ask your own question.

25
What makes writing emotional?
0
Is there a way of listing the elements that makes a real fact fun?
6
What makes a good action scene?
6
What makes a bestseller - Writing or Setting?
4
How can I get my readers in the gut?
4
What combination of had and 'd makes prose flow better?
8
How to avoid overdoing deconstructive tendencies in writing?
0
What makes you turn off from reading a blog immediately?