Am I guilty of bad 'as' writing?

I am trying to use more action tags to supplement the 'He said. He asked.' dialog tags. But, now I have read several blogs suggesting although 'said' is invisible and can be sprinkled as liberally as desired, the same thing can't be stated about 'as'. Apparently use of 'as' is the sign of a weak or amateur writer. I guess the conjunction function of 'as' has a numerical limit. Weak writing seems to be similar to porn,'you know it when you see it'. At what point does 'as' become a distraction in fictional novel writing?

I think the answers by Daniel Cann and Mark Baker give great advice. Nevertheless I want to add a different angle.

To better understand what the question is about, let us look at some drawings: 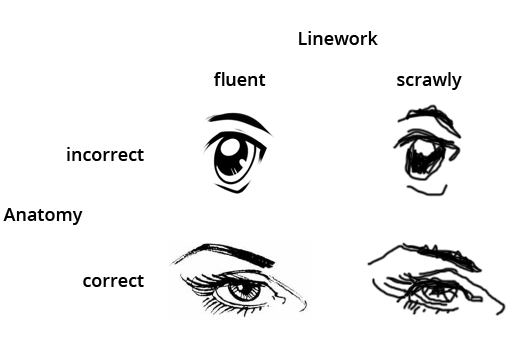 If you want to judge someone's ability to draw (and, in turn, the quality of their drawings), you can divide that ability into two aspects: the ability to correctly capture the anatomy or shape of the object they want to draw, and the elegance or fluidity of their linework.

Which drawings you like best will of course be a matter of taste, but for a majority of the general public the fluent linework will look more pleasing than the scrawly linework – independent of their anatomic correctness. The fluent incorrect eye is a typical manga or anime eye, and I think the commercial success of manga and anime is undisputed. The fluent correct eye is a typical Western comic eyes, and again this style has proven its commercial effectiveness. The scrawly correct eye represents some styles of high art and has a certain appeal, but it certainly doesn't compete with the two fluent eyes when it comes to market share and financial gain.

Writing, like drawing, can be judged (among other dimensions) by two factors. Anatomical correctness in drawing corresponds to narrative "veracity" in writing, that is, how "real" a story feels to a reader, how well-told it is, how interesting. This is the level of plot and characterization. The elegance and fluidity of the linework correspond to the elegance and fluid rhythm of the language.

And just like in drawing, well-formed sentences that read easily and do not "hinder" or "irritate" the reader are the strongest factor for literary commercial success. There are many books on the bestseller lists that have irritating plot holes, flat cardboard characters, and no suspense whatsoever (that is, they are "anatomically incorrect"), but they are all written in a fluent language. On the other hand, there is not a single example of a great story written in clumsy language (that is, what corresponds to the scrawly but correct drawing) that has been professionally published. Many self-published books fall into this category, but none of them have sold beyond the small circle of the author's friends.

From this observation we can conclude that the first and most important success factor for an author is his or her ability to write in what readers (and editors) perceive as a fluent, unobtrusive, standard literary style. If you want to write in any other style – for example, if you want to mimic spoken language, verbal thought, or internet slang –, you need to be an accomplished master of that style, otherwise your writing will not appeal to most readers.

Now, English is not my mother tongue, and I cannot judge whether or not you need to avoid "as" in standard literary style, but I will answer your question as if it were a problem and use it to illustrate my solution. In my own writing, I generally trust myself when my writing feels wrong. If – to use your example – I feel that there are too many "as's" in my writing, then very likely there are. If only to someone with my sense of language. And if others agree and write blog posts about it, as, again, in your case, then I don't ignore that hunch but try to rephrase my writing until it has a pleasant rhythm and flows smoothly.

Often, what I need to do is break out of my first idea of that sentence and say the same thing in another way. If my idiosnycratic linguistic habits lead me to think of every relation in terms of "as", then I force myself to find another way of saying what I want to say.

When I want to write (using Daniel's example) –

In tiring slowness the sun sank toward the horizon.

and so on. Sometimes it is necessary to change the sentences before or after the one in question to find an elegant solution.

The problem in writing can again best be understood by looking at drawing. Drawing anatomically correct requires "seeing without understanding". If you are interested in this aspect of drawing, Betty Edwards' Drawing on the Right Side of the Brain provides a perfect introduction. I will ignore this aspect, because the present question is about what corresponds to the the fluidity of the linework. Drawing fluently requires movements that the average person is not used to. Because people use their hands to tie shoes, guide a spoon to their mouths, or draw lettershapes, when they attempt to draw a correct visual depiction of something, their movements are clumsy and angular, resulting in scrawly lines. Similarly, in their everyday lives, people use language to talk to other people, to write academic journal articles or PowerPoint presentations, or to answer questions on Stack Exchange. When they attempt to write a narrative, they are not used to the different syntactic structures and the different vocabulary, and their writing feels clumsy and inelegant.

There is a great interview with comic artist Travis Charest in which he explains how his drawings become stiff and dead if he does not draw for a couple of days. His perfectionism is extremely high, and what he draws after a week-long hiatus is still far beyond what other, lesser comic artists are capable of, but the principle still holds: Unless you are a very experienced writer, that is, someone who has been writing more or less every day for many years, written language will not come easily to you. It is your non-literary everyday use of language that is an obstacle to elegant writing. And while Mark Baker is right in that with time and practice your writing will get better, you may want to polish what you write now, and not wait for your linguistic ability to slowly grow with your narrative ability, as he suggests.

With reference to @what's answer, here is how Picasso drew eyes: 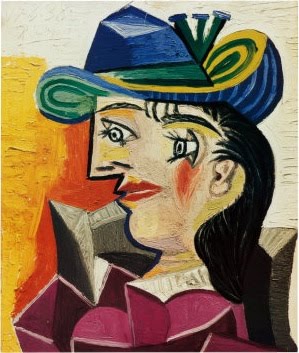 Don't listen to them

There are very few rules to writing and good writers know how to break them. Someone saying 'don't use as much' is totally wrong. They just are. In your prose, 'as' will be used exactly when it is needed. It is very hard to overuse a word which is very common in the English language.

You can't write that without as. Here's another example of a sentence with as:

Just as I was ensnared, the lights turned off.

Obviously these sentences are missing flair and brilliance, but they are not wrong sentences. They could be used in writing without problem. What you can see in their articles is that 'as' is completely bad.

This is what I believe you should think:

Not the answer you're looking for? Browse other questions tagged creative-writing technique or ask your own question.

14
Getting emotional while writing, good or bad?
4
Is it a bad writing practice to end a paragraph with question?
1
Is showing motion by repeating words a sign of bad writing?
1
Writing a bad review in a tactful way
5
Techniques for picture writing?
9
Is it bad not to explain things?
4
Is stating the feeling in the action that describes it a sign of bad writing?
2
Is writing in fragments bad practice?
52
Traits of Bad Writers - Analysing Popular Authors
14
Is it bad writing or bad story telling if first person narrative contains more information than the narrator knows?