I am writing heroic fantasy. Plot demands hand-to-hand combat, about which I know little. What is the best/quickest way to learn enough about pre-firearms defense to write convincingly about it?

If you are contemplating about mediaeval warfare with longsword type weapons, try reenactors. 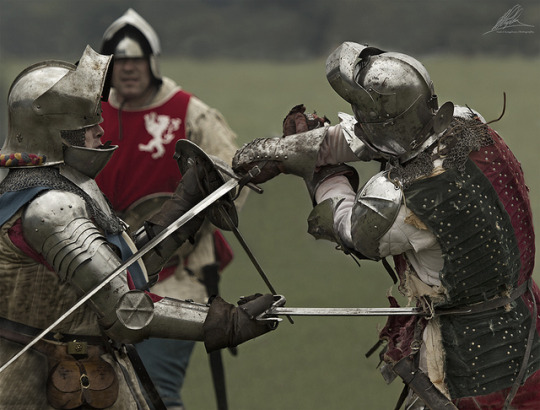 These people are actually researching what can, cannot be done with the means at the time. This includes fighting in full plate using realistic swords.

There are lots of visuals to be found but best would be to seek out a group from a compatible age and go through your scene on-site, separating out the impossible and adding meat to the spectacular.

Most martial artists will not be able to inform you about conflict nor will you pick it up watching tournaments. (Opinion informed by over 30 years in a Kung Fu style which is pragmatic and was taught to one of the Chinese armies, but we don't spar full-contact.) They may be able to describe or critique unlikely movement. Too many arts are either sport-oriented or just ban dangerous moves for safety reasons.

A readable but possibly upsetting book is On Combat which talks about the psychological and physiological basics.

A lot of John Ringo's SF books cover this kind of conflict, with good training descriptions in There will be dragons which is free from Baen. It's about how a far-future group of re-enactors rise to prominence when technology goes away. (Ringo's style is to pick an idea like how can tech go away and build a believable case for the event and after.)

Baen tend to publish a lof military SF much of which is the we got stranded on an an alien planet/back in time and need to recreate military history sub-genre.

I forgot about the video series by Skallagrim who does a lot of sword and armour critique. The ones I have watched look plausible both in technique and criticisms.

There are historical and modern combat manuals you could use. They typically have woodplate illustrations or photographs and often focus on a specific weapon/style versus various opponents with different arms.

Hans Talhoffer has some, there is Joachim Meyer, and of course Miyamoto Musashi has the classic "Book of Five Rings". Guy Windsor, Christian Tobler, and John Clements are some (of many) modern folks trying to record or recreate these techniques. There are plenty of martial art manuals and modern weapon fighting as well.

Just remember that many of these manuals over-emphasize the "flashy stuff" over what most folks probably actually used. But you'd be amazed at how versatile something like a sword can be versus what we see in most movie fights (I've seen VERY few films that utilize the blade for trapping, reverse it to strike with the hilt, or have folks choke up on the blade).

A little of this stuff goes a long way, IMHO, so a more generic description with one or two specific techniques should suffice. Nothing drags a fight down like intricate descriptions of "his right arm dropped behind the enemy's left knee, pushing it forward, while his left hand gripped the enemy's belt, pulling him over his shoulder into a forward roll..." just trying to visualize what is actually being done can be exhausting.

I would suggest doing some field research if possible. This helps develop a network of contacts that you can use to help you write accurately.

You could look up a history professor at your local college that might specialize in warrior cultures.

Another possible source is to hang out at local martial arts dojos/tournaments, and take notes on their body movements, or talk to them directly.

A history museum with exhibits about warrior cultures could provide information you're looking.

As a last resort, I guess you could just research it on the internet, but where's the fun in that?

Not the answer you're looking for? Browse other questions tagged fiction fantasy resources research combat or ask your own question.

30
What's Essential In A Combat Scene?
11
Where to find some good examples of combat or action scenes?
7
How to write about Autism and Intellectual Disability?
35
Where to draw the line between fantasy and reality in a story?
9
How to write about what you don't know?
7
How do I write an action scene?
4
Where can I find resources about writing a litRPG book?
6
Need a bit of verse in my prose
7
What are some good historical sources for writing medieval battles?