Use of 'Now' in past tense

The prologue of my story is past tense, then the rest will be present tense. I cannot figure how to word a sentence correctly to take out 'now' or to make it sound correct.

Rayanne had found out she was pregnant shortly before she got sick. She was, now, five months pregnant.

The second sentence sounds like present tense, but I need it to sound past tense. Any suggestions?

The trick is to keep everything in past tense except the word now. This is how it's done in published books.

On the screen, a man crawled across the floor, leaving behind him a glistening trail of puss, blood and other fluids Chapman didn't want to think about. The man's once-white lab coat was now wet-pink, clinging to his body like a thin straightjacket.

The straw figure returned to his window. It carried a large ring of keys. The figure’s straw feet were stained red. The crimson blood seemed so dull to Vasher now.

(Examples chosen for no reason other than I happened to have a PDF on my hard drive for an easy Ctrl+F!)

Seeing how it works?

Jeff was six when he first discovered he could play trombone with his feet. He had come a long way since then — he played four nights a week at MacLennan's, now — but life had only gotten harder.

It works because of what's known as free indirect style. Modern readers are completely used to this. We intuitively understand that we're reading the character's inner monologue, so we understand that the now means the 'now' of the story, as the character is thinking it.

I think your sentences are fine. Readers understand that "now" refers to the present in the story's time.

A google search of the definition of the word 'now' should resolve the issue. 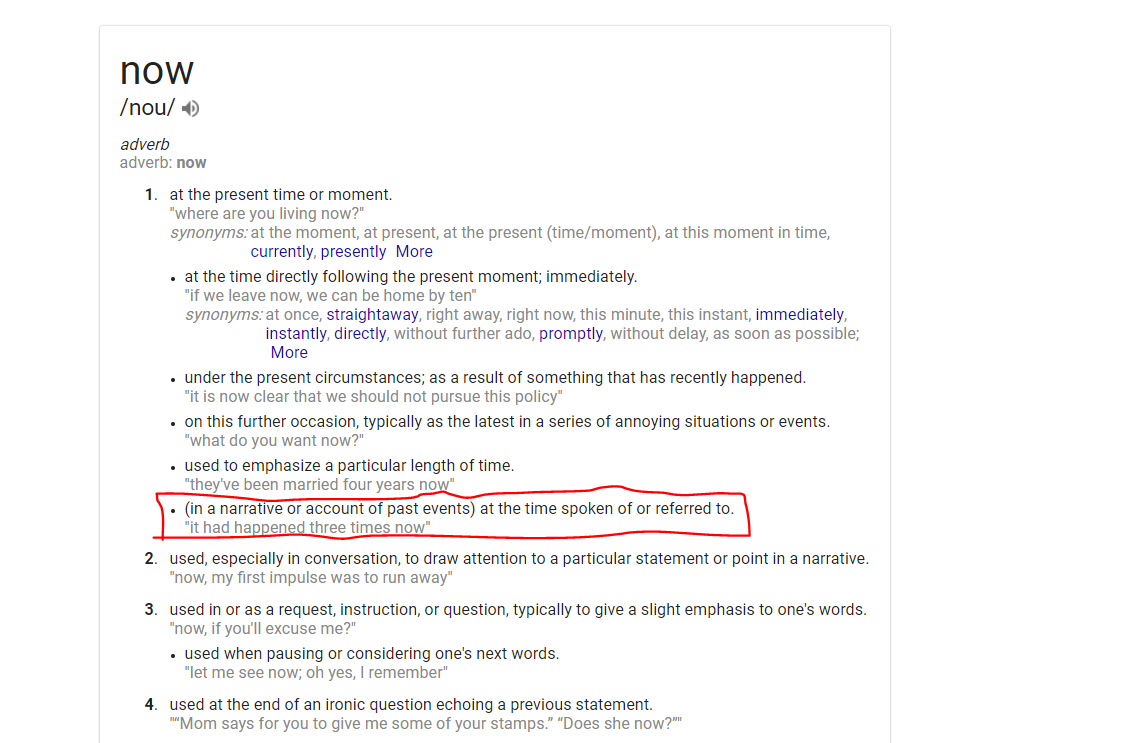 As you can see, the usage of 'now' in past tense is part of the word's definition.

I hope this finally clarifies the issue.

Novice here.. but what about.

A simple way ( but could be missed by reader.) Make everything present and then push the present again in the last sentence.. Using 'is' and dropping 'had'

Rayanne found out she was pregnant shortly before she got sick. She is five months pregnant.

Another way is to be declarative and obvious. I changed to 6 months for accuracy of the sentence :)

Rayanne found out she was pregnant shortly before she got sick. Six months later she is starting to show.

Ps. I dropped the Now as it doesnt seem a good word to use.

I don't think the tense is the issue. Nor is there any particular with the use of the word 'now'.

Your language is clunky, passive and suffers the common ailment of abuse of the 'verb' to be.

"Rayanne had found out SHE WAS pregnant shortly before SHE GOT sick. SHE WAS, now, five months pregnant."

There are usage differences between British English and US English but I'm guessing it is better written in the following form:

"Rayanne discovered she was pregnant shortly before she got sick. Now five months pregnant . . ."

Not the answer you're looking for? Browse other questions tagged tenses or ask your own question.

1
Using "now" from a character's POV

8
Should a flashback be in past tense or past perfect?
0
Confusion on inconsistent verb tenses in a magazine article
1
Stating facts in novel written in the present tense, third person omniscient. Can I use the past tenses or would I risk losing consistency?
2
Use of past tense in a book about the future
6
Past tense writing troubles. Specifically the word "Now"
3
present tense fiction - examples of it done well and common pitfalls
2
Converting/rewriting present tense narratives to past tense gracefully. Not a question about verb conjugation
3
How to avoid slipping into the wrong tense?
7
Are there any rules to follow about the narrator mixing past and present tense in writing?
1
Tense change when referring to how protagonist currently is while he is describing events