How do I realistically describe using a whip?

I'm writing a character who is going to be using a whip. While the scenario is clear in my mind, whenever I try to describe the character's usage of the whip while fighting, the only thing I can come up with is that "he brought the whip cracking down".

How do I describe using a whip? Are there any good examples I can look at?

novel description combat
Share
Improve this question
edited May 29 '19 at 16:01

Very likely your understanding of whips is only theoretical and thus very superficial.

Think of riding a bike and imagine that you knew of bikes and that you "sat" on them and "rode" them, but had never actually seen a bike used, much less ridden a bike yourself. If you where this unfamiliar with bikes, the idea that you might want to stand up on the pedals when going up a steep hill, or that you have to lean into a curve, would probably never occur to you, and in your writing you wouldn't know to say more than that a person "sat on his bike and rode it".

Whips are the same. Since ox carts have gone out of fashion, most of us have never seen a whip, and very few have actually handled one. I grew up in the south of Germany where huge bullwhips ("Karbatsche") are traditionally cracked at the expelling-the-winter festivities ("Fasnacht"). Just watching, you will notice the weight of the whip and how you must employ your whole body to swing and crack it. 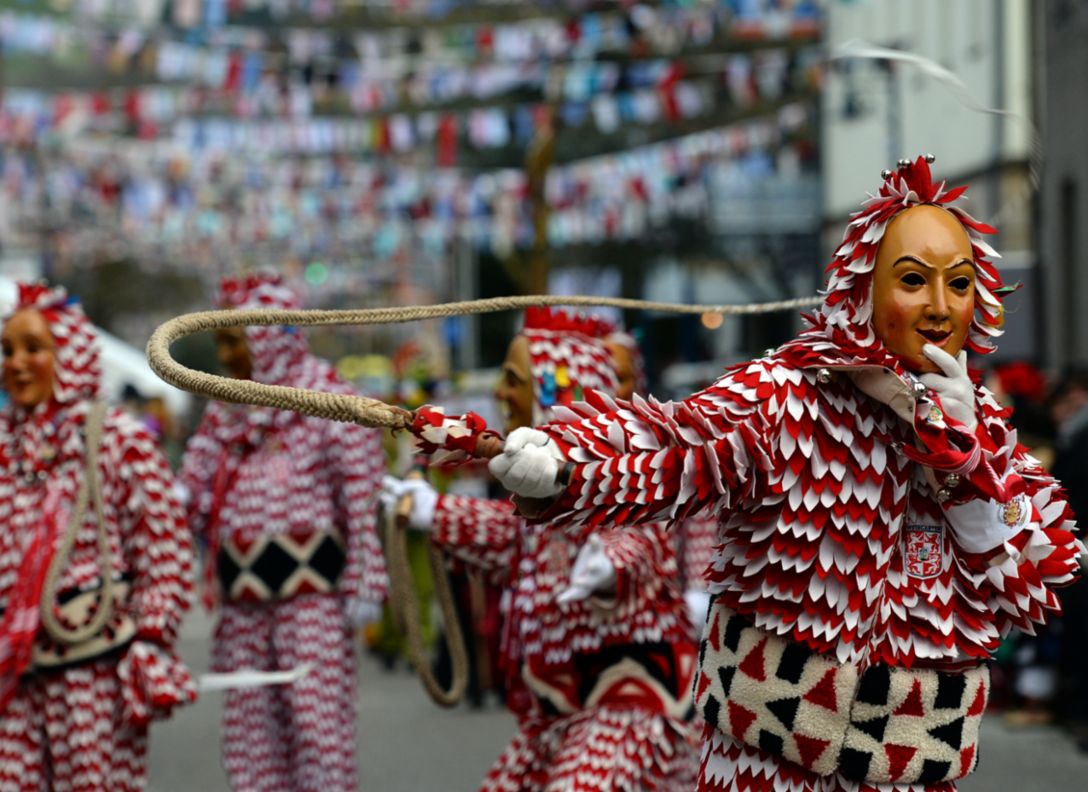 Of course these people don't fight with their whips, but maybe the endless reservoir of videos on the web contains examples of that, too.

For your writing, it would certainly help you to familiarize yourself with what you are writing about. This question is a prime example for the rule to write what you know.

Your best option would be to get a bullwhip and try how it works. Try to spank a lamp post (instead of yourself), or make the whip's end coil around it so you can pull the post towards you (one of the things "whippists" continually do in fiction, although with the necks of their opponents). It will give you an idea of how much more complex and varied its handling actually is than just "bringing the whip cracking down".

Once you have handled a whip, you will no longer have any difficulties describing its use.

If you want to read how other authors describe the use of whips, go to Google Books and search for something like "brought whip cracking down" and variations thereof.

I wanted to add a comment to what's answer, but it ended up being too long.

I entirely agree that you need to have some real experience with someone using it, either using one yourself or watching videos of people extensively.

In my writing I described someone using an axe, and could only say 'he swung the axe', but after simply chopping some wood with a real axe I have such a better idea about the motion needed to move it with force.

It requires the entire body to work with it, and you need to know what to do with your legs and arms not only to use it, but to make sure you don't cut off a toe or a finger. I'm guessing learning to use a whip would be even more dangerous.

I would suggest doing the same thing, or if you need to watch videos (I wouldn't have the foggiest idea where to buy a bullwhip) try to watch the motion of the whip on one viewing, and then watch how the person moves in another.

I only know of the movies 300 and the Indiana Jones movies that use whips, and they aren't used extensively, and I have no idea if they are used particularly realistically. This might be colouring your idea of how they really work.

I wouldn't rely on any fictional work to get an idea, try to go straight to the source. This is what I struggled with describing using axes. Actors seem to just flail them around, but as props they likely weigh nothing. Treating a weapon with real weight like that you would likely injure every muscle in your body.

Having use a stockwhip (similar to a bull whip) quite a bit when I was younger and having watched people cut cigarettes held in the mouth in half, etc. I really don't think you could fight with one. They are too slow to use, distance between you and the target can't vary greatly, and they don't do that much damage. Yes, you can cut someone with one, but not deeply.

If faced by someone who was going to attack me with a whip I would step forward a couple of paces and stick my hand up so that the whip couldn't crack. If it wrapped around my hand I would pull on it, disarming my attacker.

Whips crack because the end, the thong, breaks the sound barrier. Getting hit when it travels at that speed hurts. Interfere with it reaching that speed and it doesn't hurt. As teenagers, we often engaged in play fights with rolled up wet towels. With the right technique you could crack the end of a towel like a whip. It really hurt if one was cracked on your skin. However, you had to be caught off-guard because if you stepped closer it didn't hurt at all and if you moved back it missed.

There are only a few places nowadays where whips are used. One is with horses. So if there is a place with horse-drawn carriages (like there used to be in NYC), some of the drivers might show you how a whip is used.

Another, more obvious place is the S&M (sadio-masochism) scene. There are S&M shops in NYC that sell whips and movies of people using whips on others. You might visit one of those outlets either physically or online. There are also underground sites where S&M is actually practiced (it's "legal" but highly monitored). You'll have to pay to get in, and may be asked to join (respectfully decline unless you're interested), but that may show you what you need to see.

There's an Australian combat sport called "WhipBoxing". Competitors clad in Drizabone trenchcoats and fencing masks compete for points by striking each other with bullwhips.

It'd be worth checking out videos of the Chinese Nine-Section Chain Whip. Similar techniques would be possible with a more standard leather whip.

In film, there's a vamp character in "Underworld" who dual-wields silver whips, but it's not all that inspiring.

To write my first books using these kinds of toys, I actually purchased a couple of kinds of floggers and tried using them on myself. I know it's not a whip or a perfect situation, but just like the towel analogy, it depends on position, distance, and how hard you can bring it down to where you're aiming. FYI, every flogger I tried was totally different from the other, and where it lands on the body. A good flick from the right distance will cause pain, even using the softest suede and a "baby" suede flogger. The types of floggers with hard leather, those hurt. However, you quickly learn to position them. I don't know if this helps, but you could try it in addition to watching videos. No permanent marks even lasted into the next day. With the suede flogger, I remember having the thought, "this is exactly like getting flicked with a towel."

Not the answer you're looking for? Browse other questions tagged novel description combat or ask your own question.

3
How to write a scene that needs a lot of detail without falling into purple prose?
9
How to describe an angry voice in dialogue?
5
How to develop a more vivid and descriptive writing style
21
How to describe skin colour, if “white” is not the point of reference?
37
Protagonist's race is hidden - should I reveal it?
6
How to realistically describe pain?
3
How do I write a “suboptimal” fight scene?
3
How do you 'keep writing whatever happens'?
1
How to convey a character's race/ethnicity clearly but appropriately?