When to use normal caps and small caps in fiction?

Sometimes I don't know which one to use. For instance, what kind should I use when referring to the stamping on a t-shirt?

Mark wore a t-shirt that said, SAVE WATER, DRINK BEER.

Small caps can become a temporary convention for something distinct but similar to normal communication. In the same way that ALL CAPS has become symbolic of shouting, other character formatting can be used to imply meaning.

In many alternative fiction works, italics is used consistently to symbolize non-verbal telepathic communication. In these cases, the author usually establishes the convention during its first few instances, using tags to describe the unusual nature of the associated text. After that association has been established, all italicized text within the remainder of the novel is assumed to be non-verbal telepathic communication. This is helpful to both reader and writer as the collection of speaking tag-friendly verbs (said, shouted, swore, etc.) is much larger than the equivalent verbs for telepathy (thought, pathed, ..?)

Similarly, and again distinctly for alternative fiction, small caps formatting could be used by the author to symbolize any unusual communication including alien-languages, magical-incantations and even thunderous voices from the heavens. It is not an established standard anywhere that I know of, but it can become a temporary standard within the domain of any author's current work, or works.

All caps is for shouting.

Small caps could be used as a stylistic device at the beginning of a chapter to look nice, but beyond that I'm struggling to think of where they'd be appropriate. Maybe to quote a poster?

For the T-shirt example, if the text on the shirt itself is not in all caps, I'd italicize it (or put it in quotes).

Contrary to what the other answers claim, capitals do not need to mean shouting, but can quite simply mean that what is quoted was written in capital letters. 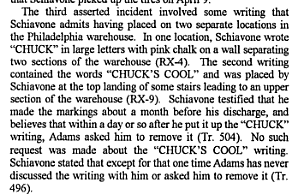 Despite this and other examples, I still stand by my comment that says to avoid all caps.

The example would not have changed its meaning if it had read:

In one location, Schiavone wrote "Chuck" in large letters with pink chalk on a wall ...

Just looking at my example will make it clear why you should avoid all caps: they dominate the text, which obviously is not about Chuck or how cool he is, but about wether or not Adams had rightfully discharged his employee Schiavone from his job because of misconduct.

Not the answer you're looking for? Browse other questions tagged style creative-writing formatting or ask your own question.

13
When should one use a section sign (§)?
9
Should dull dialogue be removed completely?
4
When to use semicolons and when to use em dashes?
0
Does the following dialogue sound stiff and formal?
5
What to do with cliched metaphors?
5
How should I write a height in feet and inches?
6
Using alternate quotation marks for 'scare quotes.'
14
Ensuring that character dialogues sound like they are coming from different people