How to deal with two ISBN from two different countries?

Since the book I am working on will be published in two different countries, it has two ISBN. The tricky question here is this: must both the ISBN barcode be placed onto the back cover of the book? One of the ISBN is from U.S and seems like it is a must to have a barcode on the cover. But having two barcodes is just a little confusing. Please give some advice. Thanks!

I agree with what the commenters have already said (and think some of them should be turned into answers), so assume this is building upon their replies. As they said, you usually only have one ISBN per book, only changing ISBNs if something substantial changes about the book. If the publisher changes, if the size changes, or if it changes from hardcover to paperback to ebook, then you'd get a new ISBN each time. Each ISBN comes with its own barcode.

Now, there's a few different points that might be leading to this confusion for you.

1) There are two different kinds of ISBNs. Grab a book published around 2006 and flip to the inside front cover. You'll likely see two ISBNs, one with 10 digits (beginning with 0) and one with 13 digits (beginning with 978). This is because the organization that standardizes ISBNs begun with a 10-digit ISBN and then switched to a 13-digit one in 2007, but not all publishers have transitioned to only using the 13-digit one. 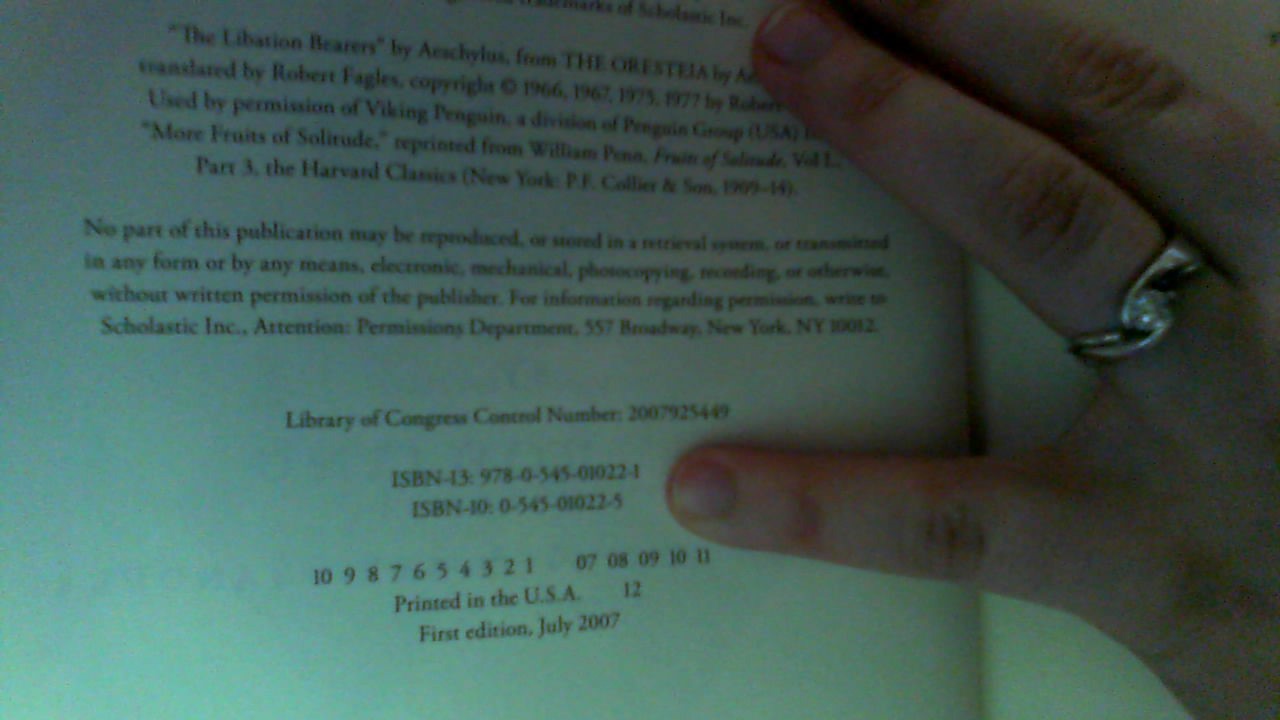 Behold my extremely terrible photography. This book is a first-edition hardcover copy of Harry Potter and the Deathly Hallows, published in 2007. Note the two ISBNs.

2) Many publishers will print different editions of their books for the different countries they print in, with translations for each language. Each edition will usually have different cover art to distinguish it, and is given different ISBNs if they're in different languages. Patrick Rothfuss's books have been published in multiple languages and so each new language edition has a new ISBN.

I have seen many times a sticker ISBN added over the original one for different countries a bit like the replica stick-on some chain bookstores use.

I have also often seen it in US prints sold in the UK and Europe with the local denomination. I gather that's what you meant, two different currencies needing two ISBNs.

In your case the U.S. publisher will have an ISBN print as part of the cover, and the other country England, or India for instance will have a sticker covering it.

Not the answer you're looking for? Browse other questions tagged publishing editing isbn or ask your own question.

6
ISBN - does it uniquely identify book dimension?
3
Can I use a different ISBN when publishing a co-authored book in two different countries?
6
How to Create Barcode from ISBN Number
3
Self-publishing / marketing children's book
3
How can I keep my writing from being perceived as "too complicated"
6
ISBN Add-On for different countries
5
Are there any free sites for testing beta 'book cover' designs?
4
Can I pay to win at publishing?
0
How exactly does a book go from typewritten pages into an actual mass-produced unit ready for the consumer, and do authors have any control?
1
Where should I post my unfinished story I'm still writing?