How do you visualize plot structure?

I want to visualize the internal structure of my plot. I noticed several contradictions, and want to better understand what's going on in my tale.

I'm not talking about different characters doing parallel stuff in different places. My plot has one single chronological thread. What I want to visualize are topics, themes, artifacts, that appear and reappear during that plot, are related to and influence each other.

For example, my two protagonists argue about something, sometimes leaning to this, sometimes more to another conclusion. When they take up the argument again a few days and pages later (having been together but not discussed the topic), both may have thought about it for themselves and changed their opinions, but at the same time, the other person will not know where they now stand, so that person must continue as if to the last opinion of his partner.

I'm getting a bit confused in my rather convoluted plot, and want to get the continuity straight. Since I'm a visual person and am currently lost in a flood of paper notes and computer files that I cannot view at the same time and therefore can't put in relation to each other with my small working memory, I'd like to somehow draw it all in a timeline-like graph.

What would you recommend? What do you use?

How do you visualize plot structure?

Also, what tools do you use for this?

This XKCD strip shows a visualization approach for tracking character interactions -- who's with whom when. It works pretty well even with a complex plot with many characters (one of the examples is Lord of the Rings).

While I haven't tried this myself, in your shoes I would try a similar approach, adding lines for the artifacts and themes you want to track. When a character "touches" a theme (talks about it, takes action based on it, etc), treat it as that character "meeting" that theme. Artifacts can be modeled as characters directly using this approach.

As for tools, since my goal is information not art, I would use any graphics tool that can model lines and connections (Visio, Open Office's drawing tool, Visual Thought, etc). Or, lower-tech, consider a whiteboard -- or possibly a corkboard with push pins and string.

As I've answered elsewhere I use sequence diagrams to map non-fiction (design) stories.

Let us assume that I want to write a story about me and my mapmaking obsession. Then I would start like: 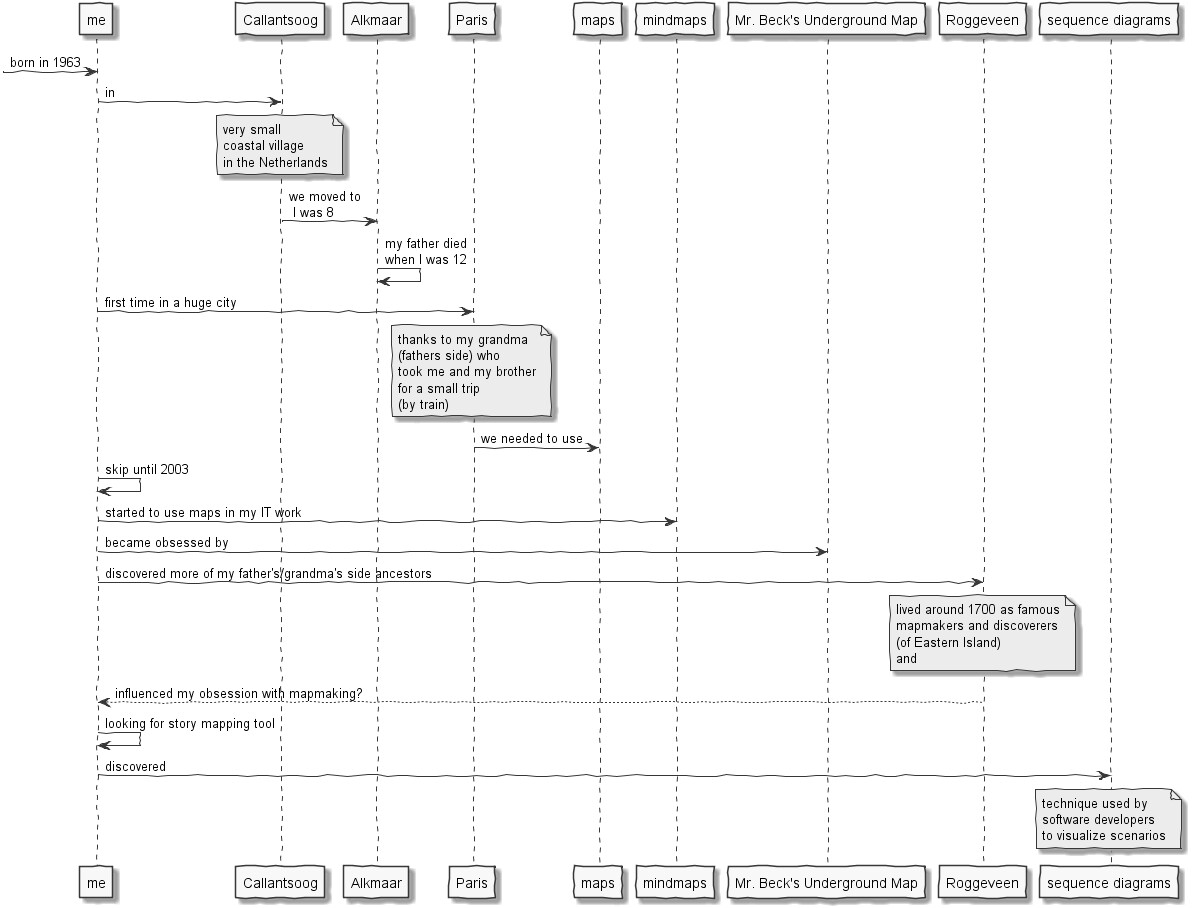 On the top and bottom row are the story's actors and participants (humans, object, places, moments in time etcetera, or the who, the what and the where). The arrows visualize the activities (the how) between the participants. You read the sequence diagram top-down following the arrows in sequence (the when). You can put notes in the diagram to explain the why or for other things which need attention or to give more detail on the who, what, were, when or how.

I use PlantUML as a tool because it allows me to write my diagram. That way I can combine the diagram with other story ideas or even the first story draft in one simple text file

I use Aeon Timeline, which offers a lot of features. I've linked drectly to the features page so you can check out if the visual effect works for you.

When the events are very convoluted (especially if there is a lot of physical travelling), I use yEd graph editor to better 'see' where the characters are and how they affect each other. However, I always keep the same characters and events in the Aeon Timeline since it will help keep track of time (and whether characters are in two different places at the same time) very efficiently.

I keep most of it in my head; but when I do write it down I just use an outline in a standard text editor. Word or Google docs is fine. The lowest level is the chapter, then the next tends to be scene; and then I write the events of import I want to track. I build this after the writing is done. I keep a separate "revision Bible" where I free text issues as they come up and merge reader notes.

Tracking every element would never work for me; I would spend more time maintaining the structure than I would writing. So I do the least amount of work possible.

This may not work for you as a visual person, but outlines really are the standard. Everything else is variation on the theme. Visual methods you might want to look into include: The diagrams people have been referencing, used to engineer software & workflows; I've also heard of people that pin up note cards on the wall so they can see the outline all at once and move bits around. You may also want to look up storyboarding.

Have the ending in mind and backtrace from there.

The events serve one fundamental purpose: reaching the final resolution. Everything else is secondary, hides or reveals motives, caveats and necessities, introduces complications or resolves them - but there is this one primary thread that inevitably leads to a certain end. An end you should know*

See where you are, see where you want to get, and think of points in time where current themes morph - towards the desired outcome.

I'm less visually-oriented, I think more in terms of abstract graphs of dependencies, but that doesn't change the essence: think of state of every major character, item, problem, conflict and relation as they are at the end. Possibly draw them out - the rightmost side of the graph Monica linked. Think of them at the current point of your story. Then think of all necessary transitions that will lead to that end. If they seem overly simple, complicate them; add unexpected encounters or wrong, non-intuitive outcomes. Personally, at this point I don't need to draw anything, I just grasp all the necessities and simply write them out. It's a rare case for them to be too simple; more often I need to butcher fragments because they would be too lengthy.

Nevertheless, work in nodes: given character's opinion morphs from A to B, passing through (...). The morphing occurs when confronted with another character, whose opinion was C, but it's to reach B if they are to come to agreement, so it goes through complimentary transitions. Then think "down" to arguments that would affect the opinion given way, revelations or insights that would affect it, and work down from goals to dialogues that achieve these goals, solidize abstracts into words, put them in writing.

*) There is another method to write. Start with interesting conflict, interesting characters, and interesting setting, and then iteratively progress each by a step ahead, a bit like playing chess against yourself, both sides of the chessboard taking optimal moves in sequence. You don't know the outcome until it looms at you all by itself, obvious and awesome. Or you reach a stalemate and put your never-finished story aside, that happens too, it's a risk firmly bound with this method. Still, thanks to the writer not knowing what is to come, writing that way is quite attractive - similar to reading a fascinating book, each page giving new revelations - not just filling gaps in, in a story you already know.

Here is an app that tries to make it very easy to do exactly what you are trying to do: Plottr

It's got a very graphical timeline which not only can be used for the main plot and subplots, but any running thread throughout your story. You can just add a new subplot for that running conversation between your two protagonists or any "topics, themes, artifacts, that appear and reappear"

3
Does my story structure for an ensemble zombie story sound effective?
4
How can I structure a novel to contain short stories?
6
Story Structure
2
Text structure in a fictional diary
2
How can I make the relevance of a story thread more apparent?
16
Software to draw plot structure charts
2
What editor can I use for world building that has a tree-like structure for my files?
2
What is the best way to structure my series?
0
How do you combine a thick but secondary plot with a light but primary plot?