Indicating a word choice you're unsure of

I've often had situations where I'm unsure of the correct word to be used, either when writing or proofreading. How can this sense be indicated in writing? Someone mentioned adding a question mark just before it to indicate that the writer is unsure of that particular word. For example:

Here the word in question is cadre, and we're trying to indicate that the writer is aware that's not the perfect word to use in the situation.

Is this a generally accepted way of indicating such a thing? I haven't seen it often enough to make me think so, but it feels better than placing the question mark after the word, which might make it read like a question instead.

For my editing markup I prefer a style that does not overlap and interfere with what might be part of the text I am editing.

Since square brackets indicate comments or amendments in quotes in some editing styles, e.g.

Rogers found in his study that "some [apples] are tasty".

or destroyed text when transcribing manuscripts, I do not use them for anything else.

A question mark in front of the word seems clear in its meaning to me in your context, but as a linguist I have been using the phonetic alphabet, and in this the question mark represents a glottal stop.

For this and other reasons I avoid using characters as inline editing markup.

When I want to mark a word or passage in a software, I change the background color.

I do not change font color, because much of what is published on websites or in print magazines actually has colored text, so this could be misunderstood or overlooked by a second editor (or even myself), but I haven't yet had anything published with a single word or phrase with a colored background.

A colored background seems the most unambiguous markup to me.

Some software, like Word, allows the use of comments: 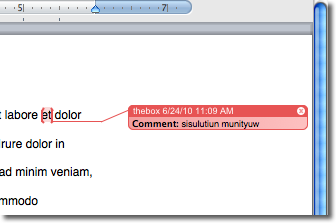 What I like about this is that you can comment on the reason of your markup, make suggestions etc., but I rarely use these.

If I ever need to mark a word or passage in plain text, I use the number sign:

I always use three, because a single one might be part of the text, but I have yet to come upon a text with three before and after a word. Also I haven't yet written or edited a text that contained the number sign (but question marks are quite frequent), so they are easy to search (and replace) with grep, e.g.

finds everything between three number signs

There isn't a standard syntax for this. I've had the same experience in my own writing, and have even seen a need for formal ambiguity in written text, such as a sci-fi "translation" from an alien language.

The practice I use is parenthesis around the questionable content, which allows for a phrase to be inserted instead of just a single word.

When I'm writing, I simply mark the word for later review. How I mark it depends on my writing tool: highlight by changing the background or foreground color, insert a note or comment, wrap in [square brackets], some other way.

Similar to Dale, I'd use square brackets and color the word magenta. The magenta is a crossover from my design job, where anything in magenta is placeholder text. Magenta in a writing context would immediately signal to me "This item needs to be changed or replaced in some fashion."

1) If the ? is for yourself, then use two in row, which would never show up in regular text. That way you can search for them before submitting.

2) If the ? is for the reader, then I'd say never ever do that. It's the writer's job to find the right word or phrase! You don't put a placeholder there with "punctuation" to indicate that it's not right. Yuck!!

These were not simply sewage treatment workers. No, they were an elite cadre -- or so they told themselves, as they slogged through human waste a foot deep.

Not the answer you're looking for? Browse other questions tagged word-choice punctuation or ask your own question.

3
Title Choice: "The Girl [Without/Who Didn't Have] A Soul"
2
Possible interactions of punctuation marks with the word "however" in a novel
8
Alternative word for "she"
6
Should word choice be varied or consistent?
2
Is "vampiric" a legitimate word?
4
Phrasing a prophecy to avoid specifying gender or number
1
Slogan design: choice of words
2
Turn 'Why' into a two syllable word